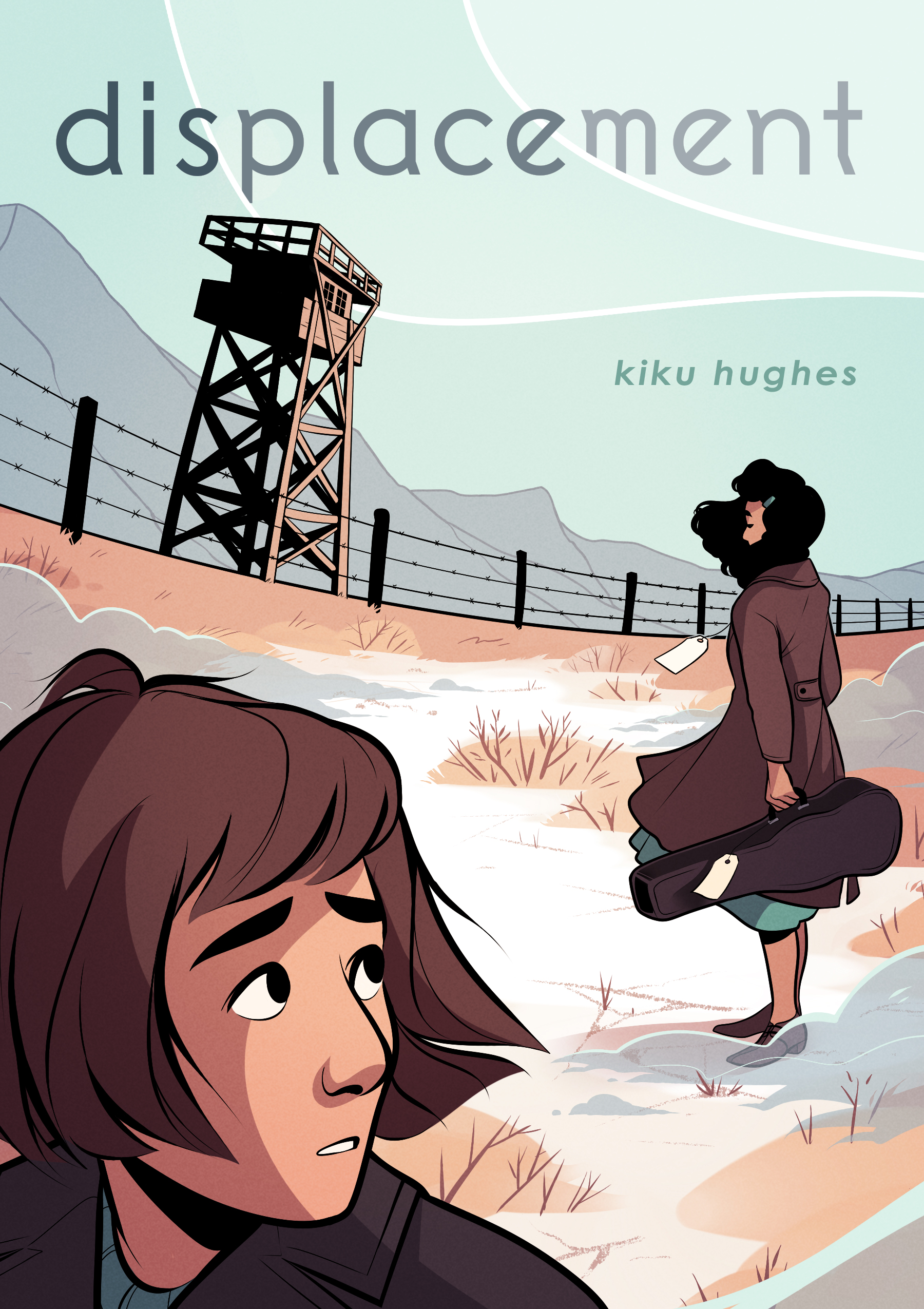 There is a Zora Neal Hurston quote that seems etched into my mind whenever I think about this year, whenever I think about 2020. It is simply: “There are years that ask questions and years that answer.” This has been an incredibly long year, for so many of us it seems a lifetime has come and passed before our eyes: the pandemic, the call heard around the world to end police brutality, the damages from natural disasters like fires and hurricanes…and all the tragedy. It’s been a hard year that’s not even over yet.

Yet, what has helped keep me sane? Reading. 2020 has been a year of so many great debuts, especially in the graphic novel market. Published in August, Kuku’s Hughes’ Displacement caught my eyes: “A teenager is pulled back in time to witness her grandmother’s experiences in World War II-era Japanese internment camps.” I was intrigued and wanted to read more. Soon, I found myself immersed into a narrative about family ties, the stories that don’t always get shared, and the immense power that both memory and trauma can hold in life–over generations.

Displacement opens to the author and her mother visiting an older section of San Francisco, opening to see a glimpse of where Hughes’ grandmother once grew up. There’s disappointment from mom as it is a place that…just doesn’t exist anymore. There’s sighing and walking about to find ancient history: the house where the grandmother and her immigrant parents lived until 1942 before they were forced from home and into the American Incarceration camps that many Japanese Americans were made to go. Many never saw their former homes again. Mother and daughter continue walking, the author feels out of place as it she has no connection to this place, to the history contained here and she feels distanced from the branch of her family that she’s never knew that once lived here.

It is a strange, somber, and unsettling tone that sets the graphic novel and even more so she experiences the first of what she later calls the fog–that transports her back in time. The first of many “displacements” from her current day to a time from an era past where she’s transported to a time where she sees her grandmother, young,  talented, and on a crash course to be a part of American History that doesn’t always get talked about. Later after that brief interlude to the past, Hughes is happy to go back home, as they had been visiting California.

She’s happy to put distance between her and that young woman, her grandmother, whom she never got to meet. She’s never had the courage to inquire and learn more about the people who came before her, especially her grandmother. This is not cowardly. There are lives of people who don’t get talked about too often in our families–the trauma and circumstances that wrap around their lives impact ours and our parents, too. Also…sometimes, there is never the right time to ask. Yet to her surprise, once home she’s assaulted by more fog, being displaced again and again and for longer times to the past.

Once Hughes’ displacements in time get longer and longer, she finds herself face to face with the past. She has to wake up and go to bed in the very camps where Japanese American were incarcerated and see first-hand the levels of injustices that were thrown their way.  This is the true heart of the book, I believe. This is where the graphic novel’s narrative truly shines and captures a young woman struggling to understand what she previously thought was ancient history and having to deal with the dehumanizing actions done to a certain group of people.

Re-imagining what life was like during these years is trending troubled water that wrenched my heart as a reader. These were immensely difficult times, and the author fleshes out life in these camps, the young people she came to know–their personalities, their hopes and dreams. The ones who resisted in quiet and large ways. The ways families were strained and how people in general preserved.

What cannot be understated is the tackling of Hughes’ heritage as a biracial American here in this book and the threads she pulls together connecting her and the story she always wanted to write. One illustrative example is one of her earliest displacements when she finds herself in a line waiting to be shipped off, she stumbles and is helped by a young man also in line. When he asks if she’s in the right place, she’s shook but reflects that even if she had been there during that time, she’d be waiting in line with her mom. But no, she would not have deserved to be there. No one in that time period did.

Later during her longest time displacement, she privately asks her roommate, Aiko, my favorite character-a bespectacled older teenage girl, to teach her Japanese–Hughes is instantly turned down. Aiko is fiercely opposed to it. Other than it being forbidden, she thinks it useless, growing up with Japanese American immigrant parents. She believes that teaching her younger roommate will be useless where even the very sound of the spoken Japanese language would be seen as fascist by most of the country. Hughes is disappointed and expecting the younger crew to be more passionate about their heritage. Their whole worlds have changed and they’ve thinking of survival. Of the future, uncertain as it is. It is something she starts to come to understand herself but is saddened anyway–deep down she wants to connect deeper with her roots and learn more about her family.

As one of the best graphic novels published this year, Hughes’ debut carries so much depth, so much weight. I cannot wait to start seeing this work in classrooms and on syllabi across the country. What I know for sure is that Hughes’ Displacement is a deeply personal, thoughtful, and careful work that has been in the works for a long time. In the afterword, the author writes that this book is a work of fact, fiction, history, and memory…so there were people and events she wrote and illustrated to flesh out the pages of this powerful read.

What was on the minds of the youth in these camps? How did people respond to democracy and having a say in how they were treated? Where there queer people existing in these places? How did the people make life just a little more bearable during these times? Hughes’ artwork fills the pages recreating this time period and there are scenes that could light up the night sky with the depth of emotion she places on the page. Scenes like when receiving a small and unexpected gift that inspires a well of gratitude and connection to the people around her to scenes of being conflicted about a “loyalty questionnaire” passed across the camps that terrified and split whole generations and communities because of the uncertainty of the times were brilliantly places for bookmarks and, sometimes, tears on my end.

Our connection to the past is not lost, and Hughes brings the book to a beautiful close that is closure for her own family’s story about the parts of history filled with silence and sometimes, shame–and a fierce desire to not forget the past in order for similar tragedies and atrocities not to be repeated. Not now. And not in the future. At least, not without any of us not standing up for what we know is not right.

For books by authors and illustrators of the Asian Diaspora, Displacement is a newer, worthy addition. For literature detailing the experiences of Japanese Americans: the Issei, the first generation-people who emigrated from Japan to make this country their home and their children, the second generation, the Nisei who made up the first generation born in the U.S., Displacement is well researched with much care. For lovers of graphic novels, history buffs, students, and the ones ever curious about the lives of those before us, Displacement is a promising book to have and immerse yourself in.

Displacement ends on a note of closure for Hughes’ family and shared histories, but the graphic novel also ends on a call to action for the readers. This book is a layered and timely graphic novel that I count as one of the best that I’ve read all year. It is also one that I keep rereading, because I love that the story feels like a coming age tale but one dropped into history of the past. The author is reclaiming parts of herself through her mother, through her grandmother and even her great-grandmother and noting that memories are powerful things, powerful tools to take with us into the future while never forgetting the past and the people we’ve come from.

SCORE: 9.7 Very Cherished Carvings Found Once Again Out Of 10

Kiku Hughes is a cartoonist and illustrator based in the Seattle area. Her work has been featured in Beyond Anthology volumes 1 and 2, Short Box #6 and the Alloy Anthology. She creates stories about identity, queer romance, and compassionate sci-fi. Displacement is her first graphic novel, and it is a story she’s wanted to share for as long as she can remember. See more of her on Twitter and on her personal website. She also put together this AMAZING playlist inspired by the book here!