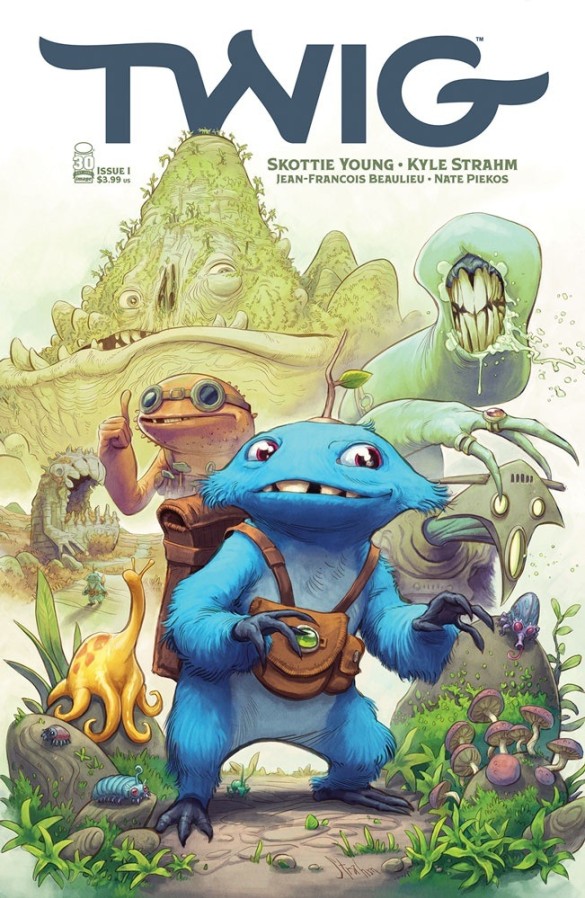 Upon gazing on the furry blue gremlin with a solitary twig adorned on top their head, my first immediate thought was “Oh, I love them so much.” With a mischievous look in their eyes, a design that is both Skittermander-adjacent and also blue-Elmo-esqu, and accompaniment by an equally quirky companions, I had a feeling that I was going to enjoy Twig. And by the second page, where a combination slime/slug/squid thing name Splat sardonically replies to Twig about not being their alarm, that feeling was immediately confirmed.

Twig from Skottie Young (whose last series The Me You Love in the Dark was distinctively very much darker in nature) and Kyle Strahm, follows the adventures of the titular entity as they go about their lives. Strahm’s character design is simple and exceedingly effective, hitting all of the perfect elements to create an entity that I intrinsically want to root for. Young leverages that instinct and couples a playful cadence in Twig’s dialog. As Twig shows up to their new job as a messenger, the story begins in proper.

The vibrant world is bursting with character, and the world is very literally alive as trees, branches, and mountains converse with Twig as they descend into the Belly mines and receive their charge, a mysterious red jewel. The set pieces are fantastic, and the energy is radiant. Between the eye-catching pages and the fun dialog, there’s a lot to enjoy. However, Twig’s narrative during the first issue is just a tad bit flat. While there are a lot of interesting things to parse, nothing much particularly happened during Twig #1. This is an unusual complaint given that most try to pack as much stuff in as possible. However, the final page does hint at a grander myth arc and more serious energy, so we’ll see how things play out.

Still, I think even though it’s a bit of an uneventful start, the aesthetic alone should sell you on Twig #1. Young and Strahm play off each other wonderfully, and the end result is a strong start to a world that can stand proudly next to its nominal predecessors/influences of Bone and The Dark Crystal.