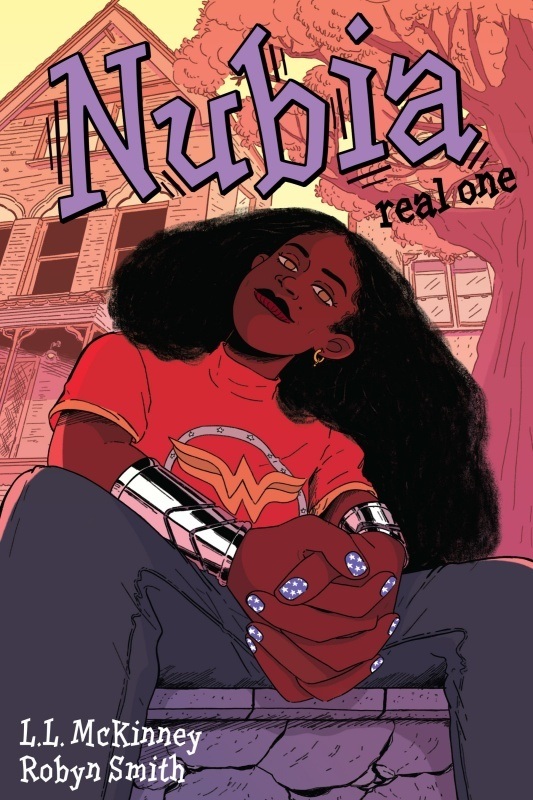 Our faves author L.L. McKinney (A Blade So Black trilogy) and artist Robyn Smith (Wash Day) have teamed up to bring up a fresh spin of an older comic book character who has been on the sidelines for too long. February 2021 marks the month that their efforts will bring us a new graphic novel on a widely misunderstood woman, seen as disrupter, rival and challenger to her twin sister, Wonder Woman: Nubia.

“Can you be a hero…if society doesn’t see you as a person?”

Introduced to the world back in the 1970’s, Nubia, made of clay, was seen as one of the first Black female characters, superhero front side. She’s been in comic book story lines here, yet she’s almost always dismissed as ‘The Black Wonder Woman” or thought of as cannon fodder to prop up more established characters in the DC universe. For Black women who count themselves comic book fans and lovers of pop culture and other Black women alike, she’s been a beloved character who has never truly had time in the spotlight or her time to shine.

As Princess Weekes, over at The Mary Sue mentioned, she first “became aware of the character Nubia during some exploration to find other Black female superheroes besides Storm, Vixen, and Bumblebee.” She’s iconic in the way that there’s tons of fan art, cosplay interpretations, and fan made merch that keeps circulating by the fan base that loves her and has always wanted more. Here the creative team of McKinney and Smith have crafted Nubia’s story in the form of an original YA graphic novel with a teenage Nubia as she learns to embrace her true self in a world filled with racial inequality, school violence, and other timely issues affecting so many young people today. Being young gifted and (openly) Black, she will be an avatar for younger audiences who are different and see themselves in a world that doesn’t always look kindly to them. She will have to embrace everything she is and more.

An excerpt from the book’s synopsis, via DC Entertainment:

“Nubia has always been a little bit…different. As a baby she showcased Amazonian-like strength by pushing over a tree to rescue her neighbor’s cat. But, despite having similar abilities, the world has no problem telling her that she’s no Wonder Woman.

And even if she was, they wouldn’t want her. Every time she comes to the rescue, she’s reminded of how people see her; as a threat. Her Moms do their best to keep her safe, but Nubia can’t deny the fire within her, even if she’s a little awkward about it sometimes. Even if it means people assume the worst.

When Nubia’s best friend, Quisha, is threatened by a boy who thinks he owns the town, Nubia will risk it all—her safety, her home, and her crush on that cute kid in English class—to become the hero society tells her she isn’t.”

When interviewed by The Root: artist Robyn Smith relayed: “In Nubia: Real One, We focus on the coming of age, of a black girl with her black family and her black friends..“Even her crush is black! We get to see a multitude of experiences both as main and supporting characters. L.L. McKinney put real love into crafting a truly life-giving story.”

In the same interview, L.L. McKinney added, : “Nubia is frustrated with the world around her, very similar to that frustration I mentioned before…And, similarly, people view Nubia as somehow a threat to them simply for her existing and attempting to be her true and full self. People don’t consider strength, courage, or standing up for oneself as a positive thing in Black women. They call us aggressive and combative. That’s something I think we all share with Nubia. And here, she’s celebrated in those things. That’s what I ultimately want to do. Celebrate us.”

I’m so excited to see Nubia have her time in the spotlight colored in lenses of a creative team that will not only craft a story that speaks of relevance, of timely matters that color a narrative that won’t shrink from her Blackness. I’m ready to read this graphic novel that will speak to Black girlhood, coming of age in turbulent times and becoming the hero you need, first and foremost. I love that the book’s cover looks like the cover of a dope mixtape that you would jump to buy. I love that Black women are attached to such a project of such a beloved character and will introduce her to a newer audience with care, love, and consideration that she’s always deserved.

The book hits stores and online retailers on February 23, 2021!

You can pre-order the book right now at dccomics.com.

You can also pre-order through Book Shop!

Look forward to our upcoming review!