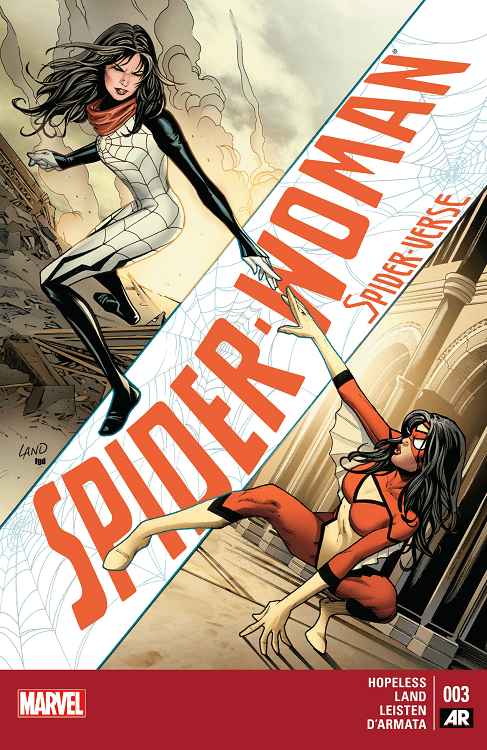 And just like that, Spider-Woman has gone back to being a pawn in the Spider-Verse. A pretty weak pawn, at that; this is the pawn that trapped your bishop in a corner and is blocked by another piece so you hope it just dies. I had hope towards the end of issue 2, but Spider-Woman #3 scoffed at my optimism by being pure landfill.

I could hardly follow what happened in this issue, whether due to lack of prior Spider-Verse knowledge or difficult-to-follow storytelling. There were at least 3 times I reread a page after asking myself what just happened, and not in the good, intentionally shocking way. Instead of enjoying the story I just kept being bugged by everything I didn’t understand, and that naturally spiraled into nit-picking what might’ve picked up the slack: dialogue, humor, and action scenes.

When it comes to humor and dialogue, I’m just not much a fan of Hopeless’ style. Every character’s voice feels forced, with punch lines being obvious and overplayed. The same applies to the action scenes. I figure the sucker-punch is supposed to be a humorous theme – or at least I hope that was the intention – but they’re too cheap to be funny and too dull to be action.

[divider type=”space_thin”]
To summarize this issue, Jessica continues to impersonate herself in another dimension, she makes a few bad jokes before she’s obviously found out, and then Silk reunites with her just in time for nothing important. Think of the most boring side mission you ever played, and that’s pretty much Spider-Woman #3.

Ultimately, this was a wasted issue. Did I learn more about Loom World? Gain any insight on Inhibitors? How about any character development for Jessica or the characters around her? Nah, I guess we’ll settle on reading jokes about making jokes, and reminding readers of “that multiversal war thing happening.” 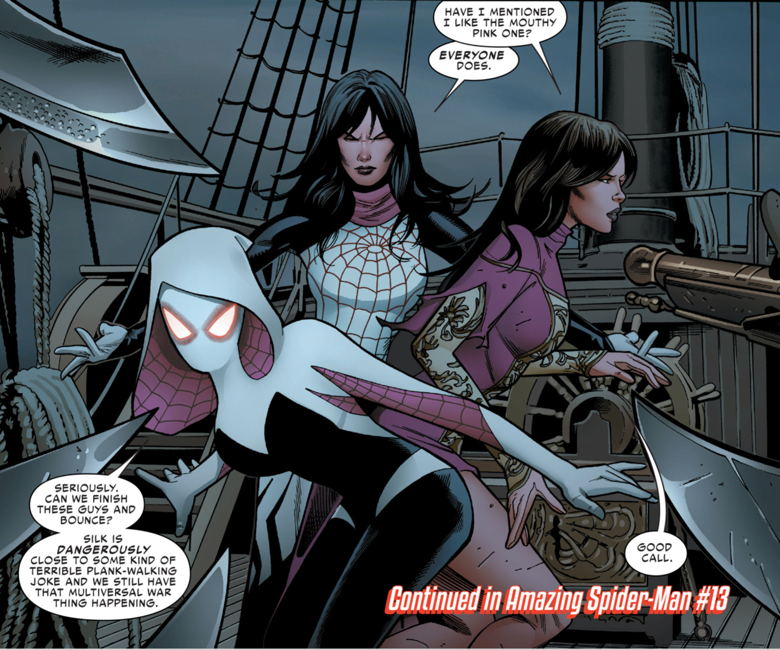 Oh, and if your bitterness doesn’t remind you why you were skeptical to begin this series in the first place, we have this panel of Jessica on all fours in a vent with her dress ripping off behind her. If you’re sticking with this book, check out reviews of Spider-Woman #1 and Spider-Woman #2 here. Then repeat after me: Lord, grant me the serenity.