What is Star Trek?

It’s a question that has been tossed around the corners of the internet since the premiere of Star Trek: Discovery in September. The question invariably invites comparison between Discovery and what its detractors consider “real”: Star Trek: The Original Series, or the Next Generation, or more recently, The Orville. Conversations on discussion boards focus on what Discovery isn’t—how it falls short of the ethos of Gene Roddenberry’s utopian vision or how it fails at the sense of exploration and wonder that space travel in the Federation is supposed to be. But let’s step away from the comparisons and answer the question.

Star Trek is a franchise that has punched above its weight class for over fifty years. The various television series have been canceled three times, forced into alternative means of distribution (first-run syndication for TNG and DS9, an online streaming service for Discovery) and propped up as a flagship series for a network which would eventually fold. Star Trek has at least as many terrible episodes as great ones—for every “In the Pale Moonlight” and “Year of Hell” there is a “Sub Rosa” and “And the Children Shall Lead.” The movies have performed moderately well, both in terms of critical reception and the box office.

Yet Star Trek‘s track record of greatness interspersed with mediocrity doesn’t begin to encompass the effect it has had on the world. “Beam me up, Scotty” is a phrase that people all over the globe instantly recognize. Generations of inventors and scientists were inspired by the fantastic technology they saw on their television screens. People of color, especially in the United States, could see themselves in positions of authority that seemed unthinkable in their everyday lives. Star Trek is the promise of a better future made possible by advances in both technology and humanism. 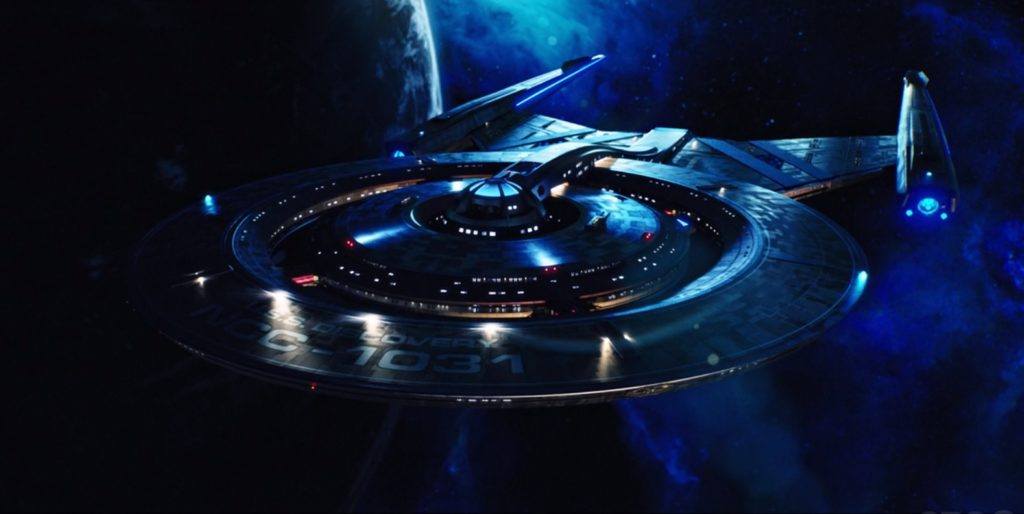 Nine episodes in, Star Trek: Discovery is all of these things. It is equal parts brilliant and frustrating. It shows us a technological future that may inspire a new generation of thinkers and explorers, even if that technology doesn’t completely match up with what we saw in The Original Series. Audiences can be inspired by the hope of peaceful exploration, although that peace is shattered quite early in the season. Discovery embodies all of the contradictions, retcons, and magic of Star Trek.

Sonequa Martin-Green’s Michael Burnham is easily the highlight of the early part of the season. I discussed her star-making turn in my review of the premiere, but it bears repeating. Martin-Green is gorgeous, confident, and mesmerizing in the lead role. She has a strong supporting cast in the crew of the USS Discovery, the ship she finds herself on after the destruction of the USS Shenzhou at the Battle of the Binary Stars. Doug Jones returns as Lieutenant Saru, now first officer of Jason Isaac’s Captain Gabriel Lorca. The rest of the regular Starfleet cast is rounded out by the bubbly cadet Sylvia Tilly (Mary Wiseman), the pretentious Lieutenant Paul Stamets (Anthony Rapp), and the late addition of Lieutenant Ash Tyler (Shazad Latif). 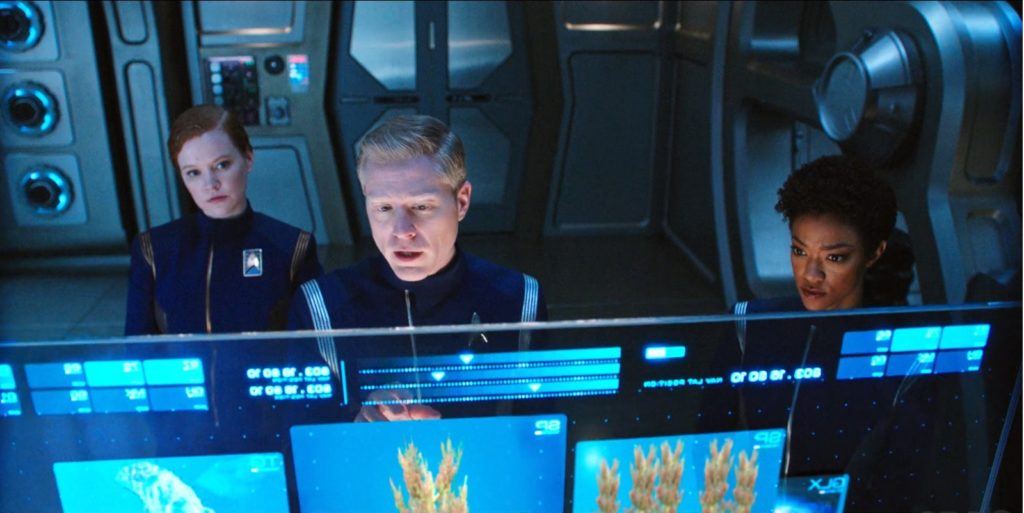 Despite setting the action of Discovery during a war between the Federation and the fractious Klingon Empire, Discovery manages to center exploration and questions of morality in its storytelling, both to good and poor effect. When the crew of the USS Discovery interacts with new life for the first time, such as the tardigrade which powers the spore drive or the lifeforms on Pahvo, we see the infectious joy of science and discovery that has long been the heart of Star Trek. When Cadet Tilly exclaims, “This is so fucking cool!”, we agree with her. We celebrate Burnham’s decision to release the tardigrade because that’s the Star Trek that we know. Starfleet officers are supposed to behave morally and righteously, even with the Klingons breathing down their necks. Despite Burnham’s mutiny and conviction, she still embodies the best of humanity in the 23rd century, as she informs Captain Lorca when he offers her a place on the Discovery:

“I’m not who you think I am. Before I was a mutineer I was a first officer in Starfleet. I’ll never bear that rank or any other ever again. But it is who I am, and who I will always be. And it’s by the principles of the United Federation of Planets that I live, and by them I will most certainly die.” 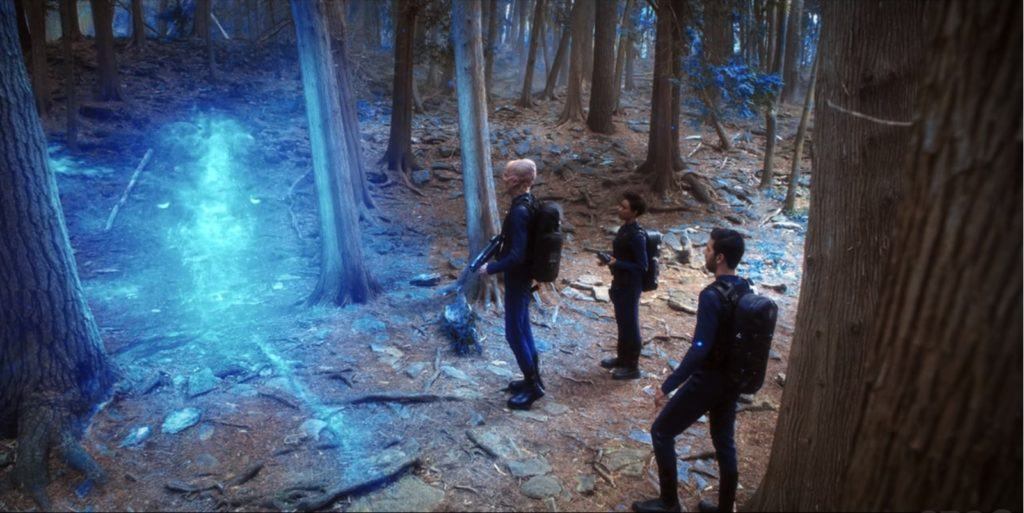 I silently cheered during that scene. While I thought it was interesting to have Burnham mutiny in the first episode, I was worried that we were heading down the ‘badass who does what she wants’ character development rabbit hole. Seeing that Burnham is moored to the ideals of the Federation made it clear that there would be a center to her beyond that one decision she made.

That strong Trek core makes the incongruous elements of the series stand out even more. There are two shows competing with each other inside of Discovery. One of them is a more modern take on Star Trek, and the other is a standard post-9/11 drama where everything is morally ambiguous and grim. Several aspects of the show play to the latter concept. For example, I’m still not sure what stripping Michael Burnham of her rank adds to her character, other than some regrets which come up now and again, particularly around the death of Captain Philippa Georgiou. The Klingon war somehow feels integral to the show but also completely irrelevant because it fades in and out of focus throughout the first season, and even during episodes. Discovery had a difficult birth, with the show being delayed twice and Bryan Fuller, the original showrunner, dropping from the series during development. Those growing pains are evident in the ways that the show’s pieces don’t always fit together in a neat package.

Discovery also comes across as dark for its own sake at times. The mutilated bodies on the USS Glenn are essentially a gory fakeout once the spore drive is described and the tardigrade’s true nature is revealed. Security Chief Ellen Landry’s death was a complete waste, and became a data point in the show’s sometimes disturbing treatment of its women characters. But perhaps the worst offender of the overly grim-dark tone of Discovery is Harvey Mudd. While there has always been an element of darkness to his character (after all, in The Original Series he basically ran an interstellar slave trade), turning him into a murderous psychopath in the episode “Magic to Make the Sanest Man Go Mad” rang hollow. Similarly, Sarek’s refusal to fully reckon with his decision to select Spock for the Vulcan Expeditionary Group while speaking to his adopted daughter at the conclusion of “Lethe” felt like an attempt to drive a wedge between them for a misguided sense of drama rather than because of any motivation Sarek would actually have. 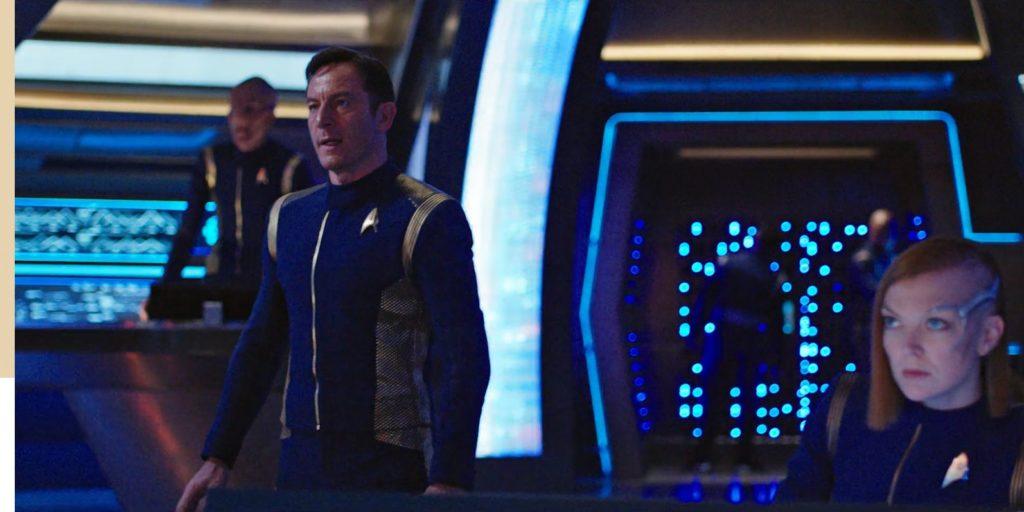 This is Discovery’s worst failing. Despite good performances by the actors, some of the characters aren’t particularly likeable because the writers of the show seem more interested in generating constant sources of conflict instead of exploring the various relationships which are possible amongst such a varied crew. Lieutenant Stamets’ condescension is borderline unbearable in large doses until his personality is rewritten after inserting himself into Discovery’s spore drive. Captain Lorca would simply be another plays-by-his-own-rules antihero if not for the outstanding performances Jason Isaacs delivers each week. Yet we see a glimpse of the true natures of both Stamets and Lorca in “Into the Forest I Go,” as they discuss the possibilities of the spore drive beyond the war, and the two relate to each other as explorers instead of an untrustworthy commanding officer giving questionable orders to a surly subordinate. The audience needs to see more of that in the second part of this inaugural season, more of these characters growing beyond the stale fights they had in these first nine episodes.

The Rest of the Season and Beyond

Which brings me to my favorite (and potentially most crushing) aspect of Discovery’s first chapter: the relationship between Burnham and Ash Tyler. Shazad Latif brings a level of likability and energy to the cast which was sorely missing, and the chemistry between him and Martin-Green lights up the screen every time they’re on camera together. Watching Tyler and Burnham fall in love over and over in “Magic to Make the Sanest Man Go Mad” was one of the highlights of the season, as it brought some joy to what at times felt like a slog through characters constantly sniping at each other.

I’m so glad to see a Black woman in science fiction find love with a man who values her and treats her well. It’s an important relationship to feature, and Discovery handles it well. In the back of my mind, though, the fan theories about Tyler actually being Voq are rattling around. I don’t want to see that relationship destroyed. I’m hoping against hope that Tyler is not a Klingon in disguise, but L’Rell ominously saying “Soon” to him in the midseason finale all but confirms the theory. 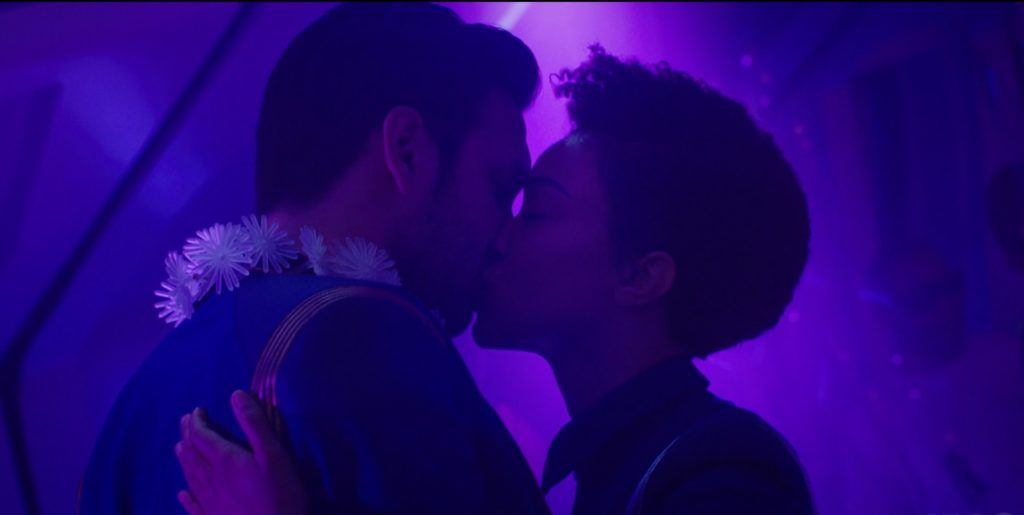 After nine episodes, Star Trek: Discovery is very much a show in its first season. There are kinks to work out in terms of characterization and plot. The legacy of Bryan Fuller will be excised as the new production staff takes the rest of the season in the direction they see fit, and the various parts of the show will hopefully begin to gel into a whole.

Still, the response has been everything that CBS hoped for, so much so that the network has already ordered a second season. We’ll be along for the mycelium ride aboard the USS Discovery for at least one more season, and I can’t wait to see where the show takes us, frustrations and all. How can I feel that way, despite spending much of this review pointing out the problems in Discovery? I’ll paraphrase Michael Burnham because I think she put it best herself:

This is being a fan. This is Star Trek.

The second half of Season One is back on CBS Access on January 7th. You can always catch BNP’s commentary and recaps on our Star Trek tag.