Before this weekend and Star Trek: Discovery, the last episode of a Star Trek television show aired twelve years ago with the series finale for Star Trek: Enterprise, but the wait for a new Star Trek has been even longer for me. I watched Voyager for four seasons until it became clear that the show runners had no intention of ever delivering on its great concept of a Federation ship lost in space. I was so disappointed by the premiere of Enterprise that I skipped the entire series. That left me to subsist on movies after Deep Space Nine ended. The movies have ranged from abysmal (Nemesis and Into Darkness) to okay (Star Trek’s 2009 reboot and Beyond). Needless to say, when Star Trek: Discovery was announced a couple of years ago, I was ready.

Discovery has the unenviable task of resurrecting “true” Star Trek. Fans of the franchise have been very vocal about their displeasure with the J. J. Abrams film franchise reboot. They’ve viewed the last three movies as Star Trek Lite, as the movies have action and comedy but none of the deeper exploration of humanity, culture, and science that has been the hallmark of Star Trek since the original series. Discovery must please the most die-hard of Trekkers, those who have stuck with the franchise since Enterprise’s ignominious end, while inviting in new potential fans and justifying the expense and bumps along the road that CBS has endured by bringing Star Trek back to the small screen.

In essence, the pilot episode of Discovery, “The Vulcan Hello,” has to be the perfect Trek. Can it deliver on such lofty goals?


*Note: This is where the spoilers start. You’ve been warned!*

The episode opens with T’Kuvma (Chris Obi) delivering a speech to his fellow Klingons — the 24 warring houses of the Klingon Empire must unite to confront the threat of the Federation, to “…lock arms against those whose fatal greeting is, ‘We come in peace.’” The scene then shifts to Captain Philippa Georgiou (Michelle Yeoh) saying those same words while speaking to her Number One, Commander Michael Burnham (Sonequa Martin-Green), as they cross a desert planet to help a species in the middle of a decades-long drought. After being picked up by Captain Georgiou’s ship, the USS Shenzhou, Burnham and crew venture to the edge of Federation space to repair a damaged relay station. In a wonderful sequence that roots Discovery in the exploratory tradition of past Treks, Burnham finds an elaborate alien structure nearby, a beacon which T’Kuvma plans to use to rally Klingons from across the empire to his cause. 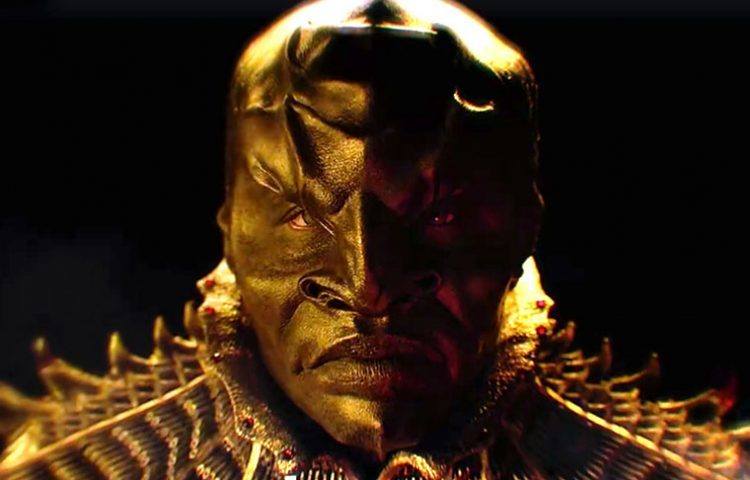 Commander Burnham encounters a Klingon warrior on the structure, and after a brief struggle the warrior is killed. The warrior was tasked with lighting the beacon; into his place steps Voq, an albino Klingon who is the “son of none.” Burnham is beamed back to the ship with severe radiation poisoning, but rushes out of sickbay to inform Captain Georgiou about the presence of Klingons on the structure. A Klingon ship decloaks between the beacon and the Shenzhou, leading to a standoff between the two sides. As the Starfleet crew weighs it’s options, the Klingon beacon activates.

Although the Klingons have crossed into Federation space, the core conflict of the episode is between Captain Georgiou and Commander Burnham, as the two fundamentally disagree over how to deal with the Klingon threat. In a line that is an instant classic, Burnham suggests that the Shenzhou give the Klingons a “Vulcan hello”- that they preemptively attack the Klingons in a show of strength and resolve based on advice from Sarek (James Frain). Georgiou reminds her that Starfleet doesn’t shoot first, and reprimands Burnham in private for questioning her orders in front of the crew.

Their argument leads to the biggest surprise moment in the episode, when Burnham delivers a Vulcan nerve pinch to her captain and incapacitates her. Burnham takes command of the Shenzhou and orders the crew to fire on the Klingon ship. Georgiou recovers and emerges from her ready room, phaser pointed at Burnham as a half dozen Klingon ships appear, responding to T’Kuvma’s beacon. The screen cuts to black, ending the episode. 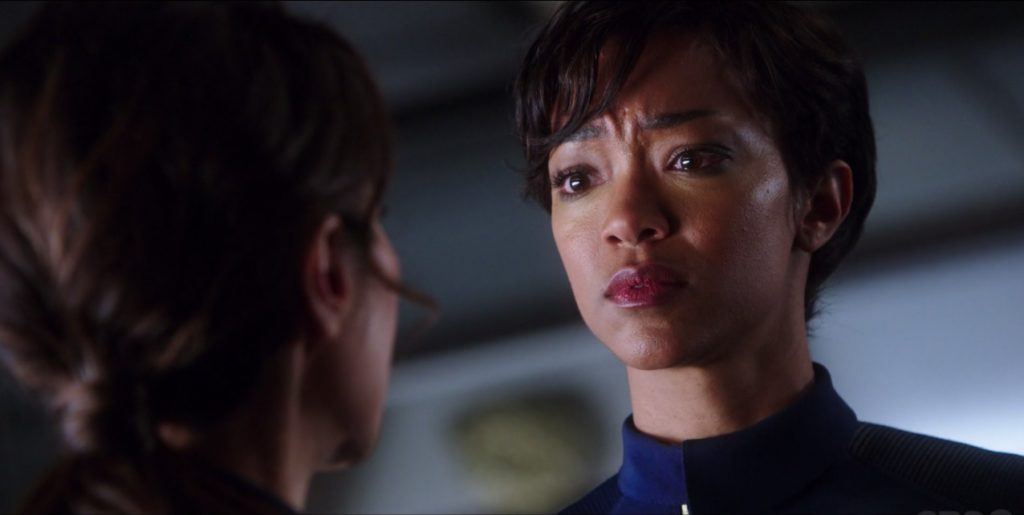 Let’s get this out of the way right now: “The Vulcan Hello” is not without flaws. The dialogue is rough in some places. It feels like Captain Georgiou and Commander Burnham are having two different conversations in the open desert of the opening sequence – Burnham is concerned about escaping the incoming storm, and Georgiou brings up the prospect of Burnham having her own command almost out of the blue. There are some slight pacing issues, as it isn’t immediately clear that the scenes aboard the Klingon ship and the Shenzhou are happening at the same time.

However, this episode is, by far, the best pilot a Star Trek series has ever had. For the TNG purists out there, I dare you to go re-watch “Encounter at Farpoint.” I’ll wait. Where past Star Trek pilots have ranged from clunky to decent, Discovery’s pilot was entertaining and fun from beginning to end. CBS has clearly invested a substantial amount of money in quality set design, special effects, and sound. The writing was sharp and the characters well-defined out of the gate. I was clutching my pillow to my chest the entire time, wondering what would happen next. I gasped out loud when Burnham nerve-pinched Georgiou.

When the episode ended on live television, I immediately opened my laptop to start watching the next episode. The week’s wait is going to be tortuous as I wrack my brain trying to guess where the story will go next.

None of those qualities would matter though if the performers weren’t up to the task. Sonequa Martin-Green is outstanding as Commander Michael Burnham. She stands shoulder to shoulder with a legendary actress like Michelle Yeoh, and plays off of the lovable snottiness of Lieutenant Saru (Doug Jones). Martin-Green captures the essential contradiction of Commander Burnham in her facial expressions, body language, and vocal inflections. She is the human trained on Vulcan, the emotion tempered by logic, in every scene she’s in. Martin-Green brings Burnham to life with energy that comes through the screen. It’s easy to see that she will take her place with Picard, Sisko, Janeway, and the other great protagonists of Trek lore. 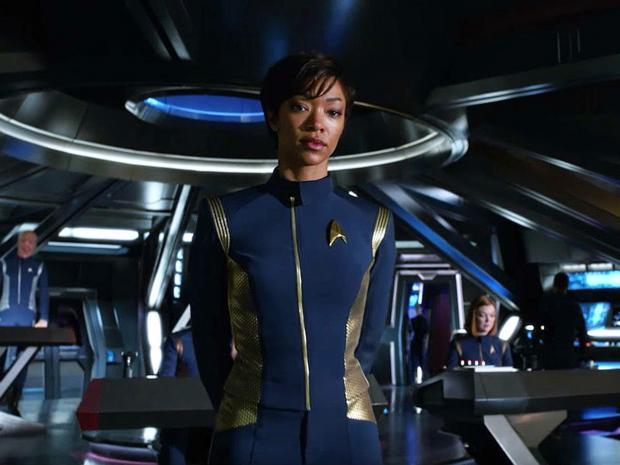 The importance of Martin-Green’s casting also cannot be overstated. Despite Star Trek’s progressive ethos and its commitment to diverse casting, Martin-Green is only the second African American woman across the 50 years of the franchise to be a main character, and the first to be a show’s protagonist. Whoopi Goldberg’s story about being inspired by seeing Uhura on the bridge of the Enterprise demonstrates exactly why this representation matters. Michael Burnham is now in place to inspire a whole new generation of Black women and girls to pursue acting, math and science, and other space and technology related fields. I know how much Captain Benjamin Sisko meant to me as a Black boy in the 1990s, and I’m happy that Black girls will now have that same feeling too.

There was some concern that Discovery would hew too close to the aesthetic and texture of the recent movies, but those fears were baseless. Discovery is quintessential Star Trek. This is not the Starfleet window dressing of the Abramsverse. It demands that the viewer have knowledge of Vulcan, Klingon, and Human culture right in the beginning. There are references to General Order #1 (aka the Prime Directive) and Kahless within the first ten minutes of the show. If you don’t know who Sarek is, you’d better go hit up Memory Alpha before you start this show. Discovery is Star Trek for the fans who have been in the wilderness for the last decade.

Even with my glowing praise for the show, there is one looming question which hangs over Discovery: to pay or not to pay? CBS has decided to lock the rest of the season behind its $6-$10 a month streaming service, CBS All Access. Unless you’re clever and a little computer savvy, the only way to watch the rest of the season is to pay for the service to watch, for most Star Trek fans, one show.

Is it worth it? Yes. Emphatically yes. Buy one less cup of coffee a week, and you have the $6 to cover the cost. If you love Star Trek, science fiction, good television, and the success of Black women, pony up the cash and let CBS know. This is our opportunity to vote with our dollars and make sure that this series is back for a second, third, fourth, and fifth season. CBS All Access is offering one week free when you sign up. Check out Star Trek: Discovery now, so that you won’t be the nerd who doesn’t know what it means to give someone a “Vulcan Hello.” 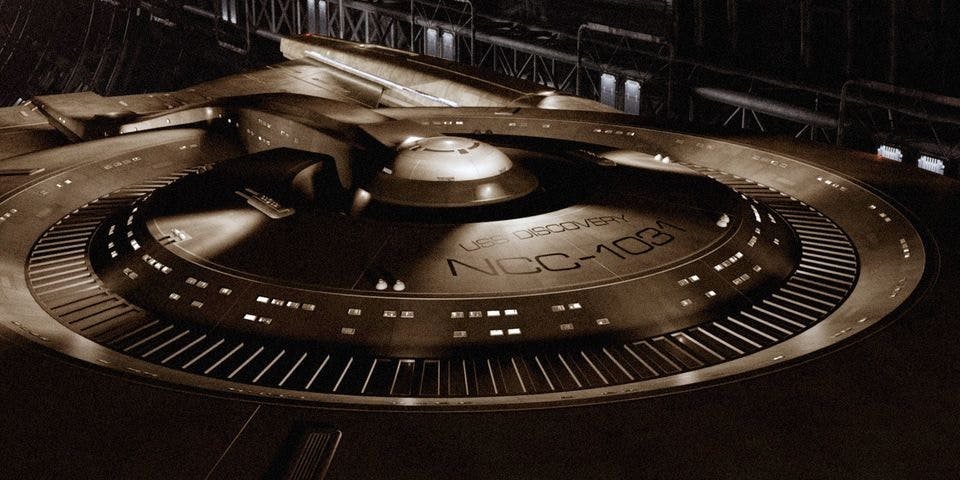