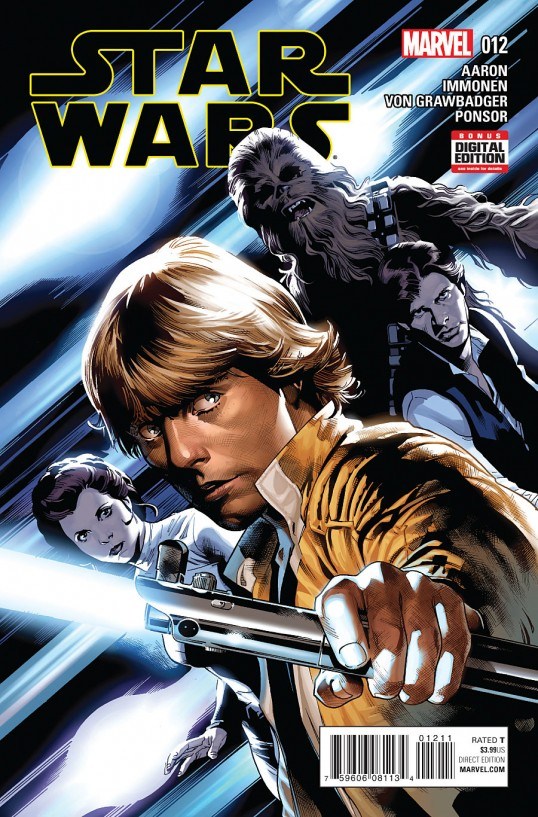 Y’all, this seems like a cheap thing to say, but if Jason Aaron’s Star Wars series doesn’t get you pumped for Episode 7, nothing will. Granted, I’ve been pumped for Episode 7 to hit theaters for a solid two years now, so I might be biased, but…well…so what? Aaron is simply batting a thousand these days and this book is a prime example of why. If you can only get one book from Jason Aaron this week….well, The Mighty Thor is really good, too, so flip a coin and choose between that and Star Wars.

Issue #6 is the big finish to Aaron’s second story arc for the series. Luke’s fighting for his life in a gladiator pit while Han and Leia meet up with Chewbacca and 3PO to try and mount a rescue. From there, the entire rest of the book goes batshit crazy, but in a good way. A few pages in, you start to feel like you’re dressed up in makeshift cosplay outfit, playing Star Wars with your friends, jumping from one random threat to another. 90% of this book is action, but it never gets stale and you’re always engaged in a healthy amount of character development simultaneously. I mean, there are points where you feel like you know a couple of characters that may/may not last very long better than I know some ex-girlfriends (take that however you want).

Stuart Immonen is easily the best thing to happen to this series in its 12-issue lifespan. I’m saying that fully aware that this is a guy who had to follow up John Cassaday. I mean, there is a certain kinetic flare that Immonen brings to any given project that he brings to this book in spades. There is a scene where the gang has no blasters and is forced to fight their way out in a manner that fans will nerd out about for years to come. The scene is so insanely awesome, only a color palette and linework like Immonen’s could possibly bring it to life.

Bottom Line: Aaron’s second arc on this book finished almost as strong as the first one. We would have liked just a little more advancement on the Han/Leia/Sana front, but I’m not convinced we’ve seen the last of her anyway, so this book really did everything I needed it to do.