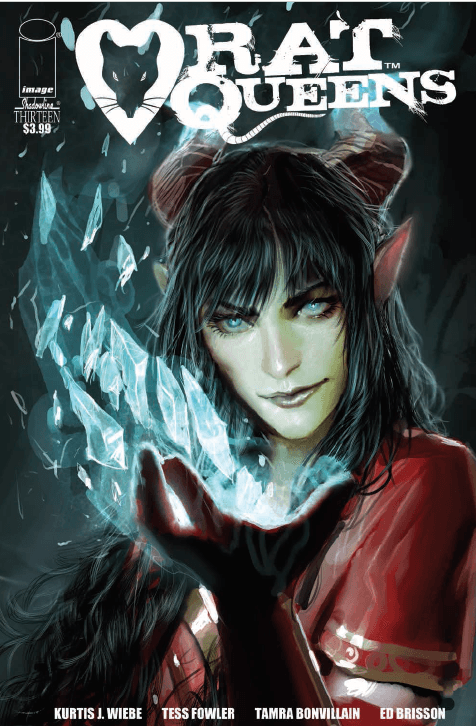 And here we are at Mage U! After the beating from Issue #12, the girls are set loose in a wonderland of candy colors and magic. Fowler’s work and Bonvillain’s colors set a scene that is exactly as crazy as Betty on a ‘shroom bender, and that’s a good thing. I love how at each turn, this comic brings me something new visually. As an aside, I also love Fowler’s work on Dee and the other Queens. With the progression through multiple artists, sometimes they have felt…incomplete visually for me. As if there wasn’t a good handle on each of them beyond a few tells — Violet’s beard, Dee’s white dots, Betty’s ears, Hannah’s horns. Now that Fowler’s been on the pens for a while, she’s spruced up their wardrobes and really honed in on what makes these characters unique. It makes each issue that much more fun to read.

On the writing front, Weibe continues to balance the main plot, here it is Hannah’s search for closure with her family just as Dee achieved hers in the previous arc, with asides for each of the characters. All of the Queens remain engaged and active in some way, even when the story isn’t about them right that minute. It takes skill to do that without drawing too much focus, to pull those threads back into the main idea in a way that feels natural and organic.

Violet and Betty are mostly comic relief in this issue, though it is their antics that trigger the big bad for the next issue. Dee’s journey of research and family continues, peaking with this gem:


[divider type=”space_thin”]
Overall, this is a solid, if not amazing, issue. It didn’t feel like it was just passing time, but there is a sense that we’re building up to something on the same level as the battle for Palisades. We just aren’t there yet, so in the meantime, we get to enjoy the ride.