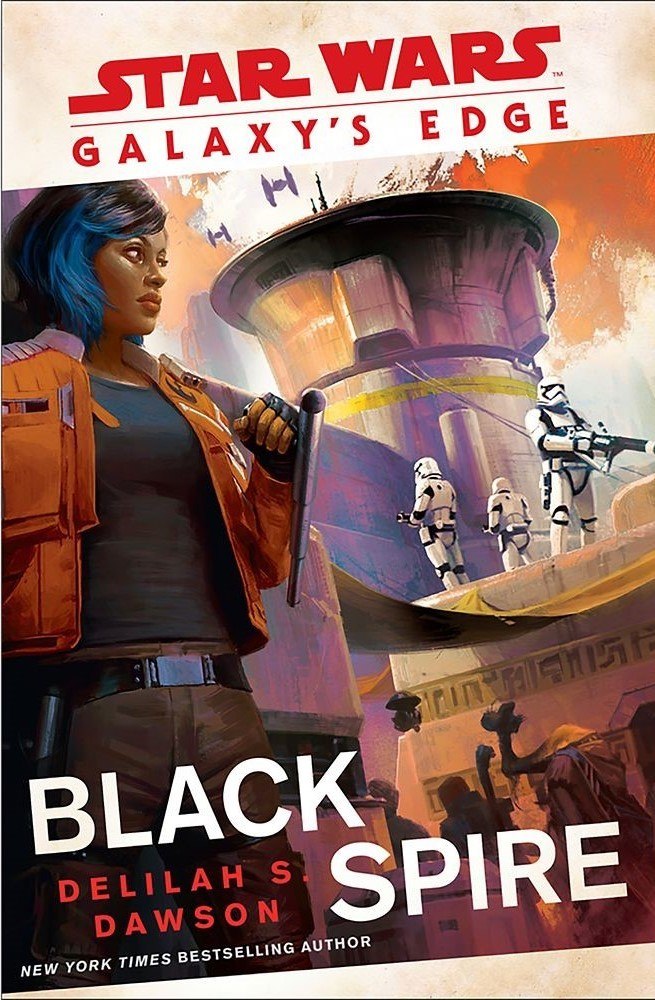 I’m on a bit of a Star Wars kick right now. Disney+ has new shows coming out in November. The comic books continue to entertain. Star Wars: The Rise of Skywalker is right around the corner. There’s a new “land” at Disneyland, Black Spire Outpost, with a Millennium Falcon ride and a cantina — I’m going next month and I can’t wait. Overall, it is a great time to be a fan.

It was with my impending Disney vacation on my mind that I picked up Galaxy’s Edge: Black Spire. The book by Delilah S. Dawson, who also wrote the NYT bestseller Phasma, promises to set up the new Disney attraction, while also introducing a new Black woman character to the universe: Vi Moradi. This was something I needed to have a first-hand opinion about. Let’s see how it went.

I’m going to put this right up front: Vi is Black. And I don’t mean that in a “she’s never assigned a skin color so we can pretend she’s Black” kind of way. She’s got dark brown skin and black hair that she wears in flat twists under a number of stylish wigs. She’s also the main character and hero of Galaxy’s Edge: Black Spire. So don’t be concerned about any bait/switch — she’s on the cover and throughout the book and wins in the end. Vi is an experienced spy and Resistance fighter, taking her orders direct from General Leia Organa herself. In her last mission, Vi turned a high-ranking First Order captain, code name Cardinal, but in the process lost a good part of herself, both physically and mentally. The book opens with her getting a new kind of assignment. She’s to go to the Outer Rim and find a planet for a new Resistance base. This is a building mission where she can put her smarts to work, while also laying low out of the aftermath of the Hosnian Cataclysm.

Riding with her are the repair droid PK-Ultra (“Pook”) and…well, this is awkward…the same First Order captain that she convinced to rebel, now going by his real name of Archex. To say that Vi and Archex have a complicated past is an understatement. Before she was able to turn him to the light side, Archex was her torturer. And even after, he’s not so much a member of the resistance as he is mostly neutral party that the Resistance can’t afford to have wandering off. Is he sent along with Vi so she can keep him out of trouble? Most certainly. But also, he’s got administrative skills, and knows all kinds of First Order things. He’ll be useful. Assuming their mutual distrust doesn’t poison any productivity between them.

Yes, this does sound like the set up for a romance novel. No, they don’t fall in love. In fact, Dawson plays with the reader’s expectations for Vi and Archex throughout the book, never letting it settle into the expected. Vi is tough, but not stubborn or foolish. Archex is reformed, but not naively following anyone. The only predictable character is Pook, as the snide droid has become a staple of Star Wars lore.

Beyond Vi, the main focus of the book is the setting itself — Black Spire Outpost (BSO). A dot on the Outer Rim, it is the sort of place with nothing to recommend it. The Outpost is full of locals and beings who have become locals, all serving a constantly revolving group of smugglers, pirates, and legit traders. You meet Salju, who runs the Outpost gas station; Oga, the local crime lord and the only government that matters; Mugu, who runs a droid depot for repairs; and Savi, owner of the scrap yard. Each of them has their own interests and occupations, which even if they’re only hinted at, lend depth to the book. You have a sense they all could fill a short story all their own.

Dawson does a good job, even as she’s introducing aliens and droids with progressively strange names, of leaning into the ones you need to remember and allowing the “local color” aliens to fade into the background. Do you meet Oga’s ex-Wookiefriend? Yes. Do you need to remember their name? No. Carving out a place in Oga’s hierarchy is one of Vi’s primary tasks. Oga, like most gangsters, likes stability when it comes to her surroundings, so a Resistance pilot stirring up opinions isn’t really welcome.

Vi and Oga come to an understanding, but only after Vi proves herself by running an errand that is part the opening from Raiders of the Lost Ark and part the Star Wars: Rebels episode “Wolves and a Door”. BSO, it seems, is built on the ruins of a previous civilization, the evidence of which forms the backbone of the local customs and superstitions. It also presents a wide number of possibilities for hiding out. I’m sure this all comes into play in the Disney attraction in terms of how the Resistance is able to stay out of sight and yet in the know.

One of the most surprising and effective things about the book is its frank depiction of the trauma that Vi has undergone in her life as a spy, and that Archex has experienced while being brainwashed by the First Order. As dashing and brave as Vi is, she’s vulnerable and suffering. She has nightmares, scars, flashbacks — she’s a realistic representation in some ways of how fighting a constant war isn’t glamorous. Even doing the right thing hurts. Similarly, Archex’s First Order experiences have a human element to them. He, and many of the other Stormtroopers, are pulled from poverty and disaster. (Archex is from Jakku, in fact.) The First Order gives them morals, food, security, and purpose. It humanizes the villains in a way that complicates so much, while not absolving them from the violence they inflict on others.

In a particularly surprising scene, Archex does try to kiss Vi. It is that awkward “I’m a human man and you’re a human woman and you’ve been halfway nice to me, so let’s kiss” kind of kiss. Vi recognizes it for what it is — a drive for physical contact — and gently sets it aside. She then adds, internally: “She’d [Vi] never cared for anyone like that, men or women, never had such urges…” It comes up again later as well, squarely situating Vi as an asexual character. It isn’t excused or explained, isn’t because she’s too busy saving the galaxy, or too strong to find the right partner. To me it seems a fantastic moment of representation for a sexuality that is so frequently erased. I would be fascinated to read a reflection on this character choice from someone on the asexuality spectrum.

As it has been said elsewhere, we live in an era where all media is multimedia. Any given piece of intellectual property can exist as a book, a movie, a video game, and an “experience.” This immersive ability can be overload. Or it can be a wrap around experience, with each piece building on and improving the next. Which is Galaxy’s Edge: Black Spire? Right now, it has done its job of adding hype to my trip to the attraction, while also deepening my connection with the overall Star Wars mythos. I suspect that when I get to the Outpost in person (so to speak) I’ll feel like an insider, like I know a little bit more about the setting that folks who haven’t read the book. Best case scenario, there will be Easter eggs throughout the park just for me.

Absent the tie-in, Galaxy’s Edge: Black Spire is an adventure novel with strong characterizations for the main characters and plenty of back-up characters to give the story good bones. The setting is well described, even if it sometimes felt already tamed or understood. The plot itself is fun, if not mind blowing, with a good villain in the First Order lieutenant who eventually comes to stop the Rebellion — Wulfgar Kath. There’s even a good twist at the end, as we all know nothing is as easy as it seems.

The plot isn’t really the driver in this book. It is about the characters and the setting. I’m not going to promise the plot will stick with me. But I’ll remember Vi Moradi and her wigs and her knitting, her determination through failure and success. She’s a good heroine and I look forward to buying her merch and maybe even meeting her in the park. And if she turns up in other books too (rumors abound of more)? That’d be great.