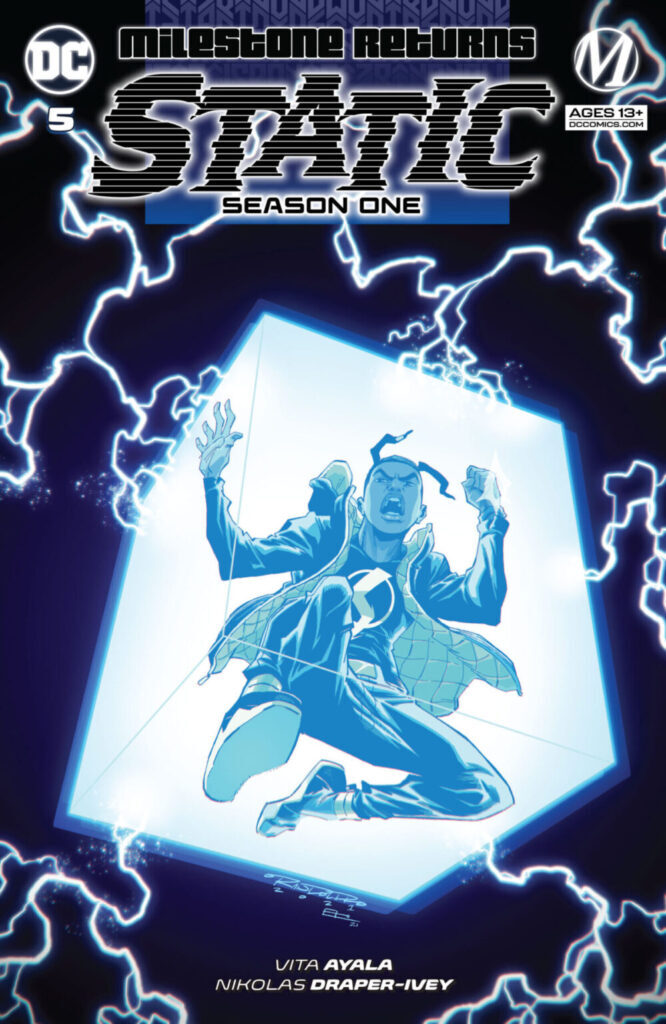 After a brief break, Static is back, providing us with the shock to our system that we’ve missed so much.

This issue picks up immediately after the cliffhanger from issue #4 when Hotstreak tried to fry Static from the inside, blasting flames down his throat. It was a wild image to even see, which Draper-Ivey conveyed with beautiful rawness. You really wondered how Static was gonna get out of something so dire.

Turns out, he almost didn’t. If it wasn’t for the glucose tablets that his sister Sharon gave him before he left the house, Static might be no more (shoutout to biology class). But those same tablets restored a lot of the energy he’d been missing. Not a leg up, but at least a puncher’s chance at taking out Hotstreak.

I really liked how in this issue Vita Ayala utilizes Static’s nerdy knowledge to turn the tide of the conflict. Like Spider-Man, Static, without the powers, is still a truly gifted and brilliant young man and his powers give him an outlet to use his smarts in more otherwise theoretical situations. It’s always quite fun to see in action.

Issue #5 focuses on Static and his friends saving captured Bang Babies from being tortured and experimented on. Lead artist Nikolas Draper-Ivey provides some stunning images as they run through the corridors and rescue other powered people. He’s bringing a unique visual flair, adding dynamic variety to this Milestone universe. It’s so different than what we’ve seen before, but it feels at home with these characters. I particularly loved a splash page toward the end of the issue when Static is rescuing some Bang Babies. It frames a multitude of characters in an abstract way where they’re lightly separated in “panels” defined by Static’s bands of electricity. It’s very, very nice on the eyes.

I say this all the time, but it’s so great to be reading these characters again after so long. I feel like a kid again. And Static, particularly, is in really good hands with Ayala and Draper-Ivey.

Reading Static? Find BNP’s other reviews of the series here