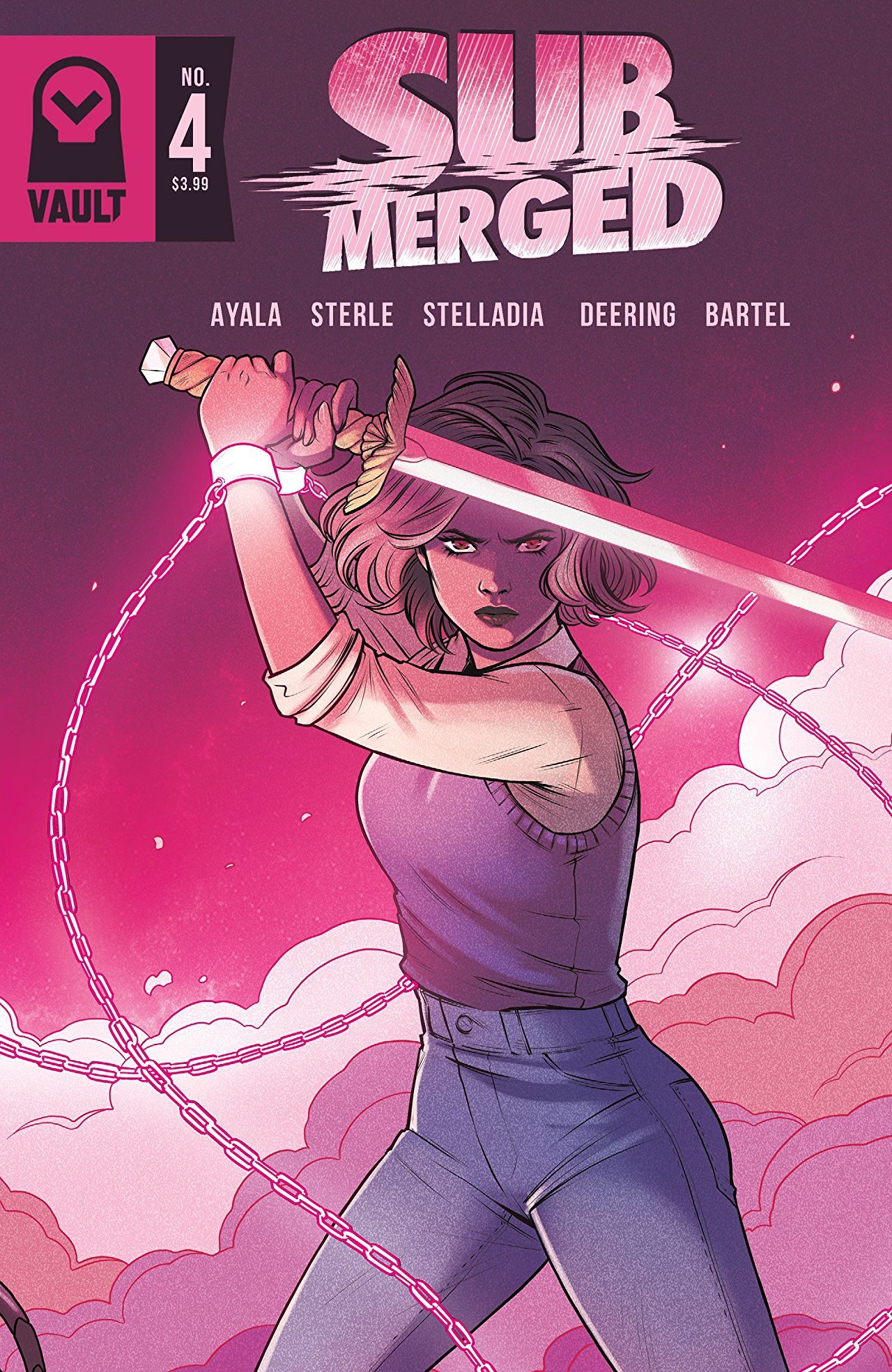 It is the final issue for Team Submerged and it goes out with a bang! Elysia has traveled a long way in this queer and brown contemporary retelling of the Orpheus/Eurydice myth set in the NYC subway and we, the readers are getting a close to her journey. This issue opens to El still looking for her lost brother and coming across not even the final villain in this story: a huge an imposing manifestation of her father on a throne, cold and demanding without an ounce of warmth. Under this seat is where Angel, her darling little brother is imprisoned. To the right of this version of El’s father is one of her mother also seated beside him yet also chained.

She looks on and speaks in such a disdained manner perhaps hoping to match her husband and their accusations for their daughter come out in both English and Spanish. El, herself is both chained and weighed down by their words. The imagery here in the art is so brilliantly a great visual cue to the heavy themes we’ve been handled in the writing by Ayala so is a writer in the comics industry that you should be watching for their fine touch on characters with nuance and depth. They really know how to introduce and expand on the backstories of characters that walk the line of being the other and give them rich, personalized narratives. 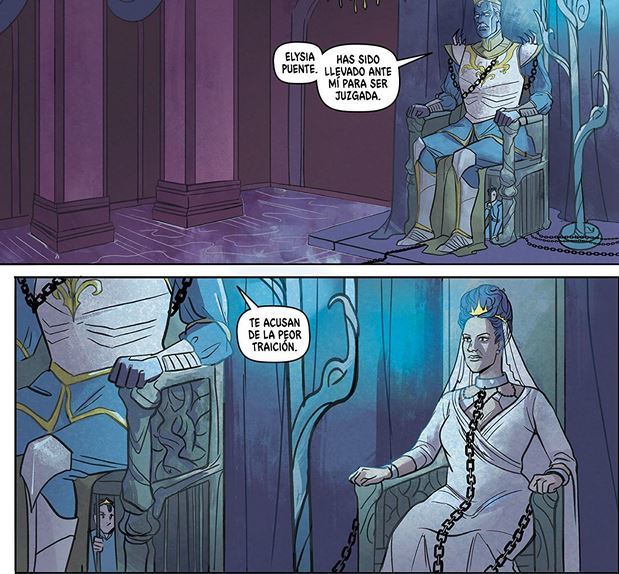 In regards to who the real villain of this story is… As Morgan pointed out in his review of issue number four on El: “But also, she’s being drowned in the deep waters of her memories, she’s immersed in a wide range of emotions, but most of all, she’s overcome with guilt.” It just may very well be–after a terrible family situation which includes abuse, strictly enforced gender roles and unhealthy codependency–guilt. (Look her father is awful, just awful. Mom contributed to this as well. I ain’t glossing over the parents here and of course, the society and culture that co-signs on this type of parenting and living to be honest.)

El is weighed down by so much and the yellowed flashbacks presented become vivid reminders of a lot of the shame and loneliness she had to endure from her family and their actions. Even before the ten-page mark we get a drama bomb by way of betrayal that widens the lens of the perceptive of the story we’ve been told: sure El has been betrayed by her family again and again. This whole descent into the subways in search of Angel has hinted at redemption way earlier on, seemingly Elysia has betrayed him by not being there for him when he needed her despite years of give and take and being the one to take the burden of his mistakes—reading on kept me so engaged. 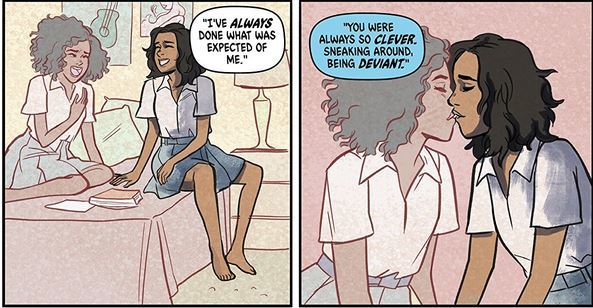 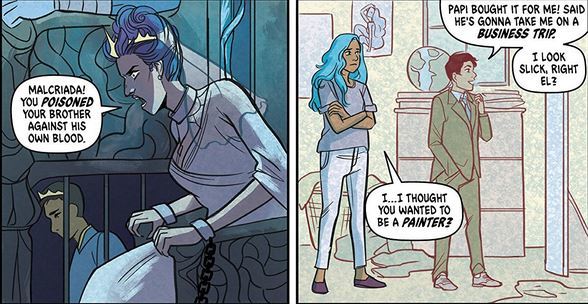 Kudos to the art, Sterle has been consistent with the artwork through this run giving us the mundane with the surreal. We’ve had glimpses of horrific looking creatures and lots of situations on the way here in the subways that genuinely frightened me. Seeing the chains of guilt, family obligation, and shame visually manifest themselves unto Elysia Puente and the variety of expressions we’ve seen from her vigorously from page to page has been a real treat and allowed me to sink into this world even more. We’ve seen El work through being chased, being scared to be queer and express herself, fight off those who would do her harm, consider college, be manipulated out of it, and most of all, try to fit in a role she thought she was born for: to be the protector of her little brother, Angel.

Stelladia works her magic as a colorist here as the further and further I read into this issue the more color was introduced. In the beginning pages, everything is so stark and blue–a present color and theme for this book. El meets these manifestations of her parents–cold, unfeeling and sterile in this throne room without much color. The flashback bring some color but it is not until Elysia starts to confront these manifestations of her parents as well as all that they’ve done and even her failings when she is physically, mentally, and emotionally able to break free—it is a marvelous sight and leads to an emotional reunion to her and Angel finally escaping–El finally setting out to do what she had intended. Deering’s lettering also helps the art achieve different emotional peaks making certain word bubbles stand out more with bolded words and sound effects that speak to the action panels. Really critical work in the overall scheme of the making of the comic that does not go unnoticed and enhances the reading experience. 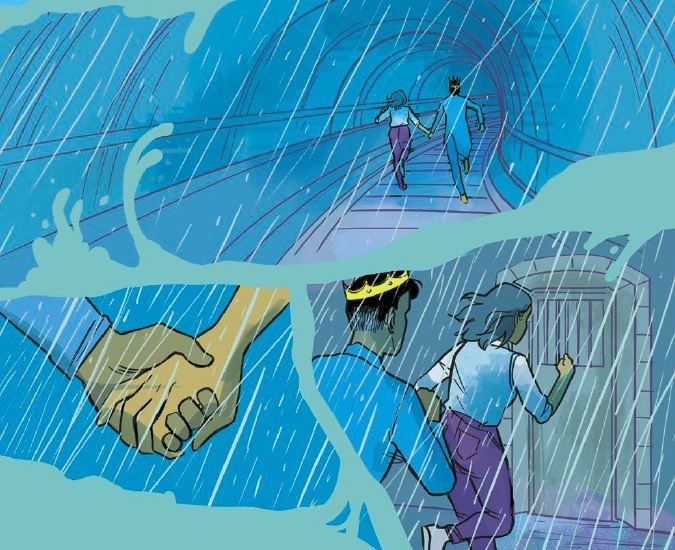 This issue ends triumphantly with Elysia finding her way back home, back from underground and finally getting rid of the chains that did bind her in the past. While she did set out to save Angel, her beloved brother she is able to come to an even bigger realization about him and her love for him. This ultimately helps set her free to be able to gain the courage to move forward and do what she’s had on her mind to do and finally get closure and bring justice to those who were wronged, including herself. This was such a satisfying (yet still heartbreaking in a sense) way to end Elysia Puente’s story as she sees a familiar face from issue number one and sets out for her new life unchained and burdened.

While Submerged is a mini-series, there is certainly enough character and meat here to keep you sustained for its entire run. I’ll miss this comic but I know it’s emphasis on the high quality of story and the stunning art was well worth the ride.

Reading Submerged? Check out our other reviews here.