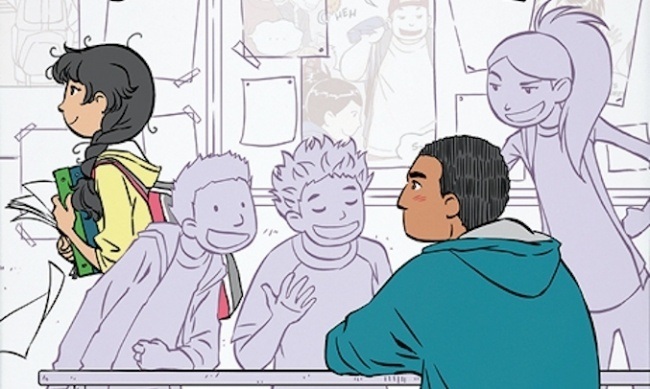 I’m familiar with Svetlana Chmakova from her earlier work like Dramacon which was published by Tokyo Pop so many years ago. A friend of mine gave me a free comic book day issue featuring an excerpt from Crush. I read it and knew I wanted to read more. I haven’t read the other entries in the Berrybrook Middle School series, Awkward or Brave, yet I read up on them enough to know that they are award winning graphic novels about middle school aged kiddos and that they are well loved.

I have twin god sisters who are finally in middle school and one of them–Rebekah–pops up with random questions and comments now, questions I’ve never heard before like: “Have you ever had a crush before?”  (To which I say ‘Yes, of course. It’s perfectly normal to have crushes on people) and comments like, “I’m just so SINGLE.” (To which I say ‘Yo, there’s nothing wrong with not having a boyfriend or girlfriend. There is NO rush. ) Hearing these types of things from her remind me that Rebekah and her twin sister are growing up and growing up means experiencing new things like having crushes, widening your social circles, and being on your own figuring out what life throws at you. 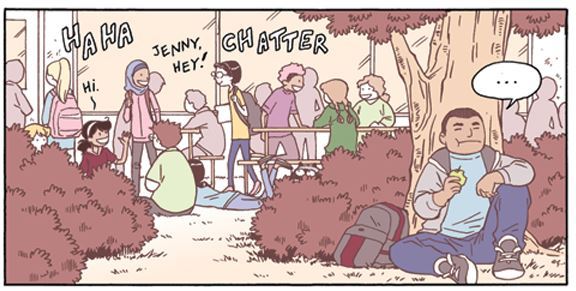 What I adore about this book is the creator, Chmakova, can craft a terrific story. A few of the overarching themes in this book that make it great are having your first crush, navigating newer spaces with new rules (elementary school is a whole new playground than middle school), and maintaining friendships—new and old. Seeing kids trying to learn to balance newer responsibilities (like getting the more challenging homework completed) while juggling extracurricular activities (like clubs), and hanging out with different social circles was something I remembered at that age. I was also pleasantly surprised to see kids verbally reinforcing the message of consent by way of body autonomy to their peers after certain kids think it’s a joke to just ignore.

I loved Jorge Ruiz, our main character who is a sort of gentle giant, who is shy and such a good-natured dude. He’s nicknamed ‘Sheriff’ for walking through the hallways and stopping those who horse around a little too much at the expense of others. He’s entered middle school with his best friends Olivia and Garrett, and they’ve been hit by wave after wave of change from trying to impress the wrong crowd to rotating boys that end up as boyfriends. Can’t say I’ve seen many boys of color as protagonists in graphic novels, and he’s a welcomed addition. His middle school experience becomes something new and unexpected when he starts developing a crush on Jazmine, the bubbly girl who is a friend of a friend who always greets him with a smile. 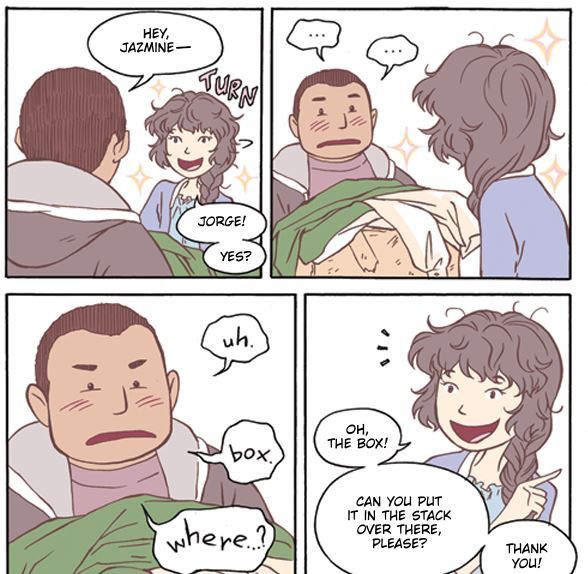 The art style is manga influenced and fun, especially when seeing the variety of the facial expressions in this book. I also felt that the coloring was a bit muted, yet I did like lettering effects. On my second read through, I noticed that there were more kids of color than I initially thought in the book. I see them in the backgrounds on almost every page, and I even see some hijab wearing students and having them in more featured roles or places in visibility would have serve this book better. I would have also liked more of them to have names. Yet, they are here in the book: on James’, the jock’s, posse and in the drama club—two groups we see often. I absolutely adored the P.E. teacher/coach, Coach Rasad—who wears a hijab as well and is no nonsense having, authoritative figure and is well respected. 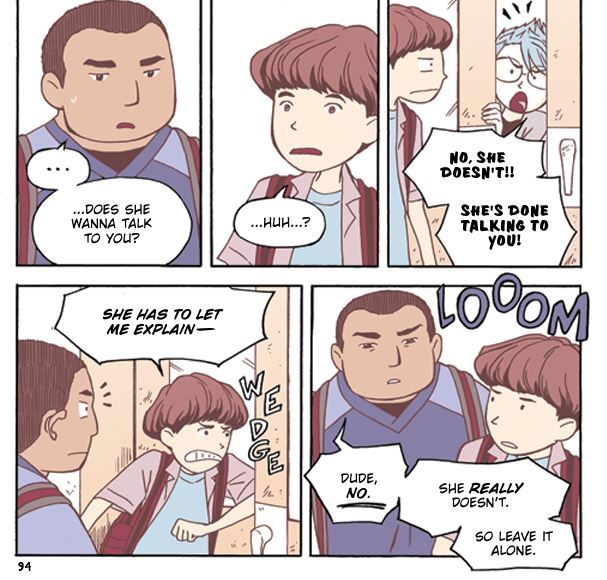 Jorge himself gets to shine, and the writing shows this in wrapping up loose ends and giving us closure which is a blessing to read after how disappointed I was remembering Bethany, the Black friend of the main character in Dramacon. Jorge gets centered, and the supporting cast is full of some swell kids which include girls who reject outdated beauty standards and serve up a big serving of sisterhood by looking after each other. This also includes boys who weren’t being their best versions of themselves and see the errors of their ways, trying to impress in the name of also outdated shows of masculinity.

Jorge goes from being out of sorts by discovering he has a crush to staying steadfast in being true to who he is and trying his best to be a good friend. He is the glue to this tale being sucked into all the drama that happens yet learning much along the way about himself, those people who make your heart flutter, and learning what type of person he wants to be: thoughtful, considerate and decent, someone you don’t doubt, and someone folks will always want to see coming. It can’t be understated that having a boy protagonist respect his female peers and hold other boys to that standard is excellent to see and something that I want to see more of. Seeing a boy protagonist view and treat girls as whole persons and not just the sum of parts is super cool in my book. 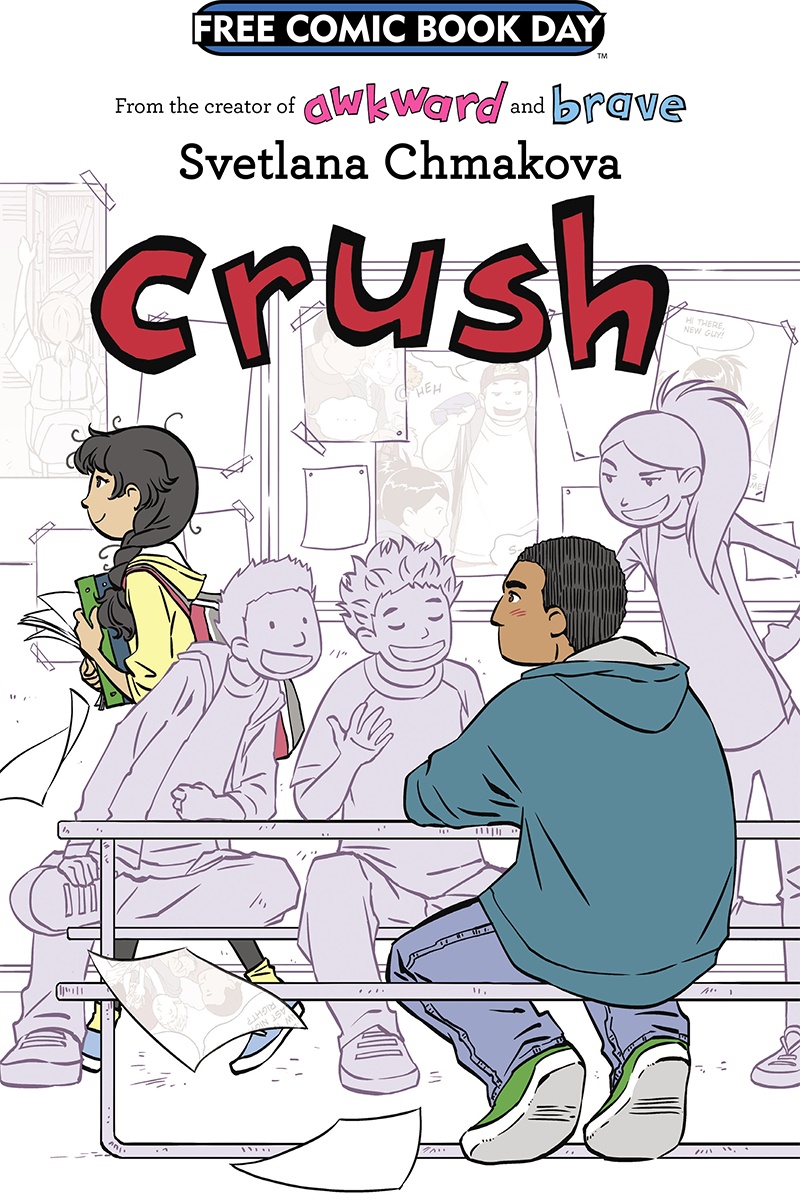 The pacing of this book flows fine ,but I was surprised to see the book’s length of 240 pages which is more than I usually see for graphic novels for this age group. This book also ends on a good note: on choosing your tribe—the people who are your friends and being chosen by them. I also really dug the respecting others–regardless of gender, regardless of if they’re your BFF or just a passing kid in the hallway. There is also something to be said about endearing friendships and how people, not just you but also your friends, change after time–some of the changing being good and bad.

Growing up will eventually happen, and there is no official manual– yet such a fun read like Brave comes along and makes me wish I had it way back when I was a terribly awkward middle schooler. Chmakova’s Crush is an adventure for the tween/preteen age group that carries all the feels and makes the ordinary seem extraordinary by how relatable it is. 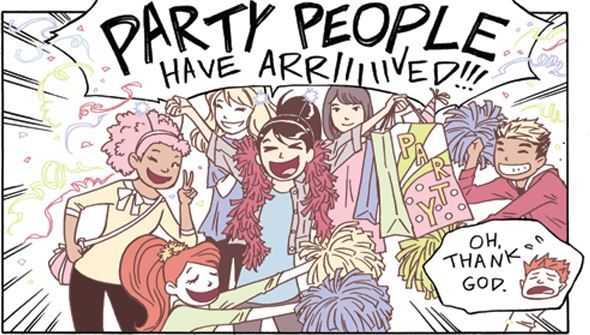 When I think about on my little god sister Rebekah, a freshly minted sixth grader and her never-ending well of questions about what dating is and what’s the correct way to wear this or that and what to do when the kid that sits next to her that doesn’t know they stink to high heavens, I’m going to be make time for those questions. And I’m going to slide her over a copy of this book and heck, the other entries of the in the Berrybrook Middle School series, Awkward or Brave because Crush has made me a believer.

8 Not So Secretive Glances In The Hallway Out Of 10

Pick up Crush when it drops on October 30th!