When I first saw news of Kodansha saying that they would be debuting Ichimon Izumi’s Blissful Land after reading a few preview pages, I had Kaoru Mori’s A Bride’s Story vibes. For the record, A Bride’s Story did come first by manga-ka Kaoru Mori (Emma, Shirley) with an English translation available in 2011. It was a nineteenth-century tale of two engaged folks located in probably northern Kazakhstan; a young woman from a nomadic tribe betrothed to a twelve-year-old boy eight years her junior.

A Bride’s Story is a beautifully detailed series that was an educational look into how culturally marriages, families, and societal expectations were different in different time periods and parts of the world. Art wise, it was also incredibly detailed with all the period clothing I remember seeing and being awed about. Here’s an in depth review about the series if you aren’t familiar and you’re curious. Lastly, outside of the historical manga genre, it fits nicely in the slice of life genre.

Whereas Blissful Land comes with a later publication with a similar story and incredible art, our protagonist here in this tale is Khang Zhipa, a 13-year-old doctor’s apprentice living in a mountain village. Set in 18th-century Tibet, he is going about his daily duties of collecting medicinal herbs and such and comes home to unexpected guests! A bride-to-be around his age and her wedding party stay the night, and Khang is due for the biggest surprise the next morning. The bride’s name is Moshi Rati, and it turns out she’s actually Khang Zhipa’s fiancee from another land! I initially pegged this book for the slice of life genre for the slower paced focus on everyday life and such, and I don’t think I’m wrong.

Yet, I love that Blissful Land can also be defined in the Iyashikei genre (a subgenre of Slice of Life) which “are very slow manga that focus on the everyday activities of people, the tiny, happy moments in life, and nature as a calming, healing read” as noted in a review of the manga by Looking Glass Reads. (Here’s also an essay that makes a better attempt to define Iyashikei which I found extremely helpful.) Healing certainly describes not only Khang’s future occupation but the journey this book takes in his efforts to heal others and how heart warming reading along was. 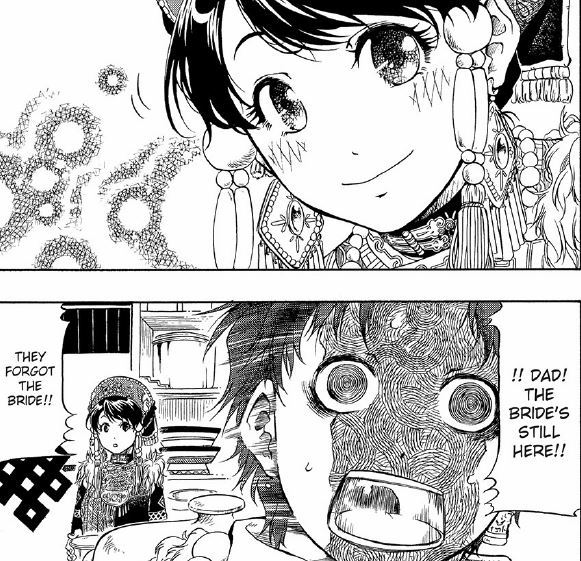 Now, Kodansha debuted Blissful Land in a new campaign called KC 4 ALL : Manga For All Ages late last year in November with some fantastic looking titles such as Good Dog, Cerberus! by Moha Arimura. The campaign released 4 new and unique digital-first manga that they’d recommend “to readers of any age—because they are too funny, too epic, and just too good!”. 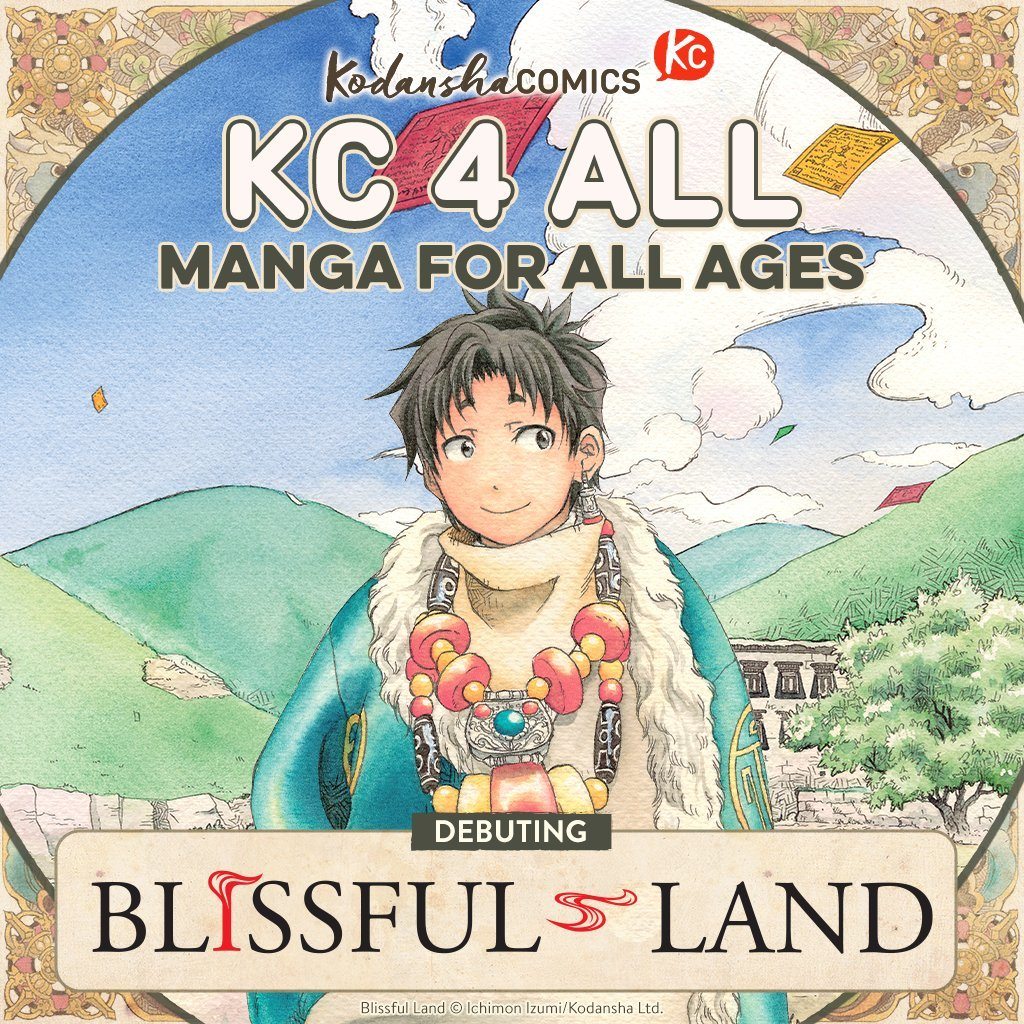 So, that means that this particular volume of manga joins a curated collection that includes Chi’s Sweet Home and Tokyo Mew Mew and also such titles like A Silent Voice, which personally I LOVE but because of the content matter I’d keep for 13+ aged readers. While there’s nothing that strikes me as ultra violent or with content that is geared towards more mature readers that would make folks label Blissful Land with a age restriction sticker or try to wrap it in shrink plastic (WHEW. Do y’all remember those days?!), I feel this manga can be considered an all ages volume but will probably be read and appreciated more by readers that are least 13+. Curiously enough on the Comixology page for this volume, a suggested 15+ age is labeled.

For those who like their historical manga and/or are history buffs, this manga is set in Tibet, and we get to learn proper Tibetan honorifics. For example, early in the book when Khang approaches Tenzin and calls out to him with “Tenzin-La” it is noted that “-La” is a honorific similar to the Japanese “-San” so it is a formal way to greet and refer to someone, in this case someone older and more established than him. “Pema-ga” is in the same vein as “Pema-chan”, an affectionate honorific sometimes assigned to equals like friends or affectionately given to those younger than you like children.

Learning about the different customs such as how Brides-to-be traveled: on the backs of their fathers–or on the backs of their husbands! Seeing the different herbs collected for certain medicines for certain ailments is also worth looking into (Barberry for eye drops, the Pelt of an Otter to stop bleeding) –which I’m certainly pretty sure many of them are still collected and used today. Seeing certain Tibetan foods like Tingmo, steamed bread, and Shapale, meat pie, sent me down a rabbit hole on YouTube looking up videos and getting hungry. 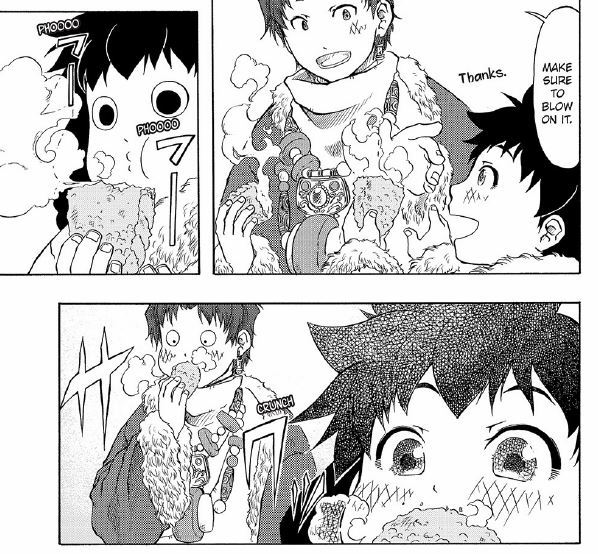 The artwork is a real treat to look upon and immerse yourself in from the opening shots of the mountain village with the farming plots and animals to the elaborate clothing. I got sucked into whole pages of interiors of buildings like the kitchen with such elaborate details where herbs, cooking items, and cupboards are all on the page. The pages that feature cooking and preparing medicines alongside chanting and conversation alone are worth their weight in gold. Khang has a variety of silly and intense expressions that are shown on his face and can be seen in his body language throughout the book that speak to his boyish charm and innocence. Such captured moments are hilarious fun while others touch upon the severity of the situation.

At just fifteen, he’s still very much a child on the cusp of becoming a man, yet old enough to be considered to apprenticed and relied upon to help his household. I started off reading thinking the story would center on this boy and found that it focuses on Rati, his future bride, his family including his younger sister Pema, and other fellow villagers. As adorable as it is to see him be wowed by Moshi in their first meeting, it is equally enjoyable to see him slowly learn about who she is and what her passions are. The two teens are still growing up and maturing emotionally and physically: they’re still figuring out each other and trying to process not just what being married will be like one day but who they’ll be marrying. I had worried that Rati would be a side character, a means to an end–but she does have some budding agency. She’s along for the ride but manages to be helpful.  She is a key player in helping to resolve some of the conflicts in the book along with starting to find her voice in a new home, in a new village. 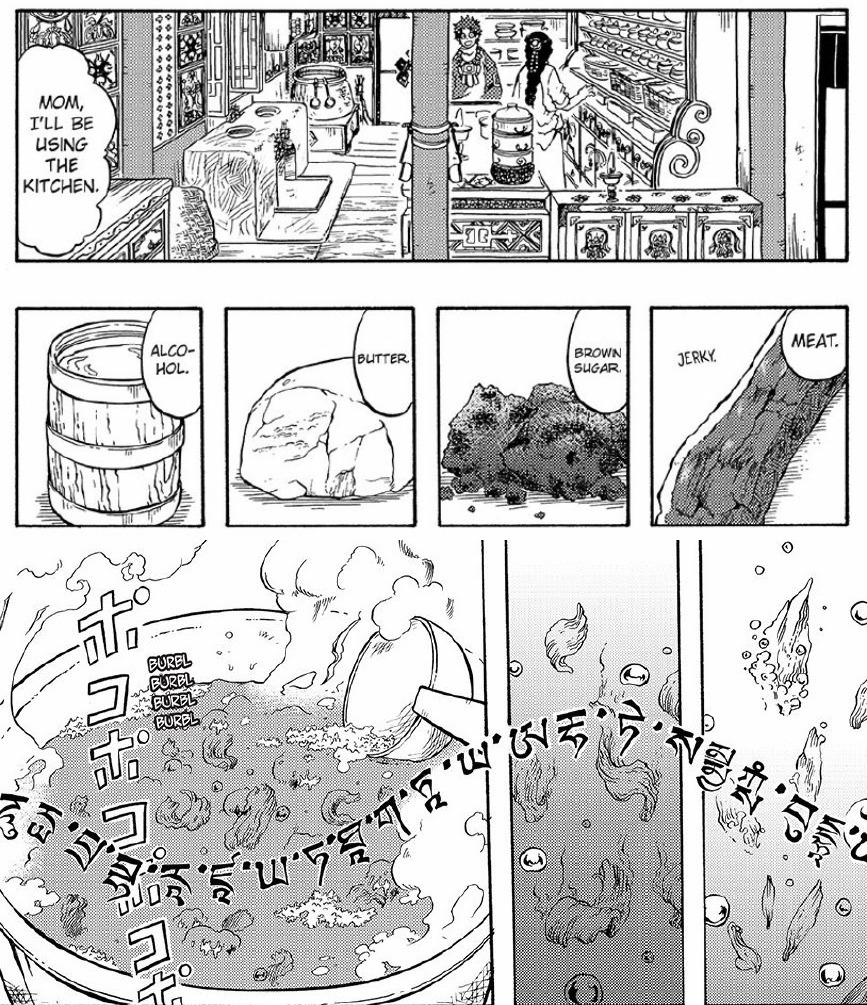 I’m a sucker for the focus on crafting the medicines and food items with healing properties of that time period. Young Khang’s dedication to his doctor apprenticeship and his consideration and care of the people around him really comes across the more and more I read. He happens to think beyond himself to the people in the villages and surrounding areas without a doctor or healer and how he wants, at least the people local, to have blissful smiles–with one less worry because he’s around and can serve them. And tied with that is his blossoming relationship with Roti, and how they’ll figure out how to move forward.

I’d hate it if people pit Blissful Land with A Bride’s Story in the fashion that folks are pitting Bird Box and A Quiet Place against each other. Similar slow-paced historical narratives with exceptional art by Mangakai, yet I believe that there is room for both series in the world. Not sure how long a series or how many volumes Blissful Land will be but if the first volume is any indication of what the heart of the series is about, I’m game for the next volume following Khang and Roti’s journey. Come for the slice of life premise, stay for the absolutely endearing journey of food and family and young adults figuring out how they can heal those around them with more than just medicine.

8.2 Buddhist Chants Sang by Enthusiastic Young Doctors Out of 10

Read more of our manga reviews here. Kodansha released volume two of Blissful Land this week so if this look up your alley regarding your manga tastes, pick it up where books are sold.