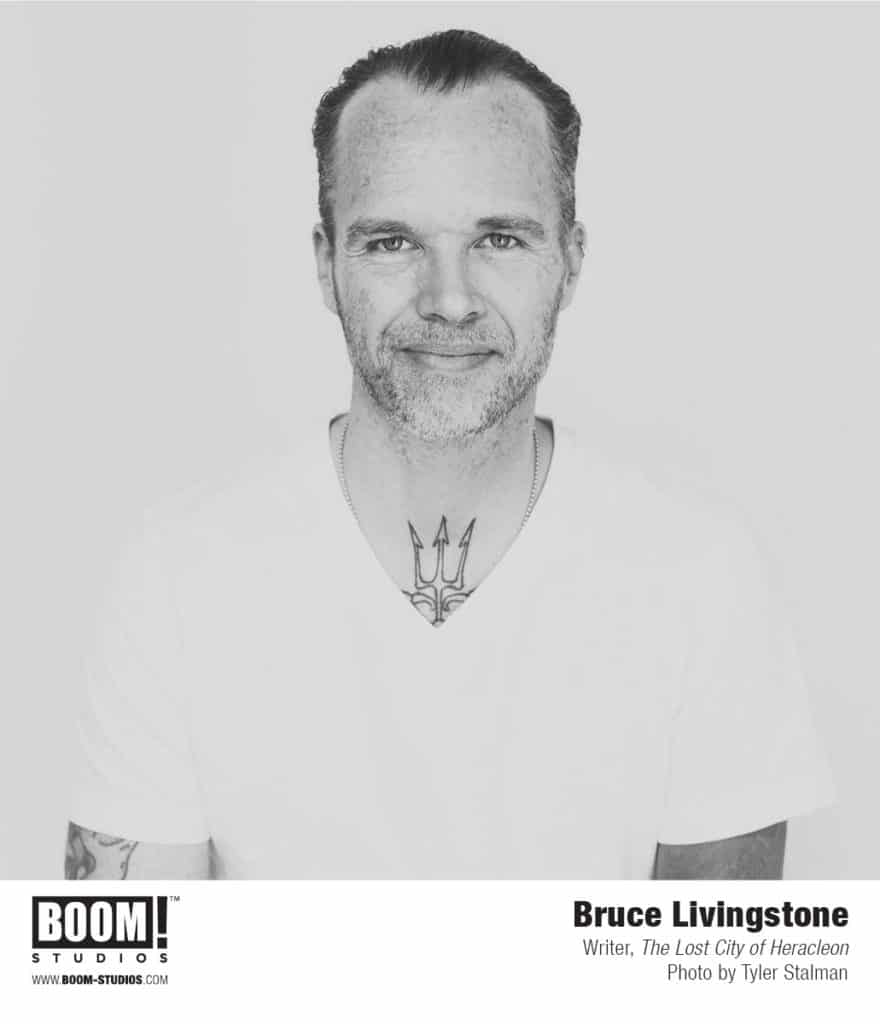 Last week, you might have seen our advance review of BOOM! Studios’ graphic novel, The Lost City of Heracleon. Well, this week, we are happy to say that we got a chance to interview with both the writer, Bruce Livingstone, and artist, Mike Willcox. Be sure to read both ahead of the release on August 29th.

BNP: To introduce our readers to the story, how would describe The Lost City of Heracleon.

Bruce: Called to adventure, young boys Lou and Shiro find themselves on a time-slipping craft made by the ancient gods and captained by an off-the-hinges old man. They soon discover Lou’s missing father might still be alive as they are transferred into fully grown warriors headed straight for the battlegrounds of Ancient Egypt. After re-uniting with Lou’s father and battling the God’s army of monsters, they travel to the Lost City of Heracleon. As the gods tinkering with fate become reckless and apathetic, the boys become part of a legion hell-bent on restoring balance to humanity, ending in 1914 Sarajevo attempting to prevent WW1.

BNP: The Lost City of Heracleon is heavily rooted in a familiar trope of young heroes-to-be getting “called onto a grand adventure”. So to speak, what “called” you to the story? How did this book start and transform? What were some major influences?

Bruce: This all started when I set out to write a story for my son, Sozé. It was meant to be a short book and ended up over 240 pages. Most of my ideas in the first part of the book stemmed from a fascination with the ocean, boating, and scuba diving. The story just spewed out of me as I got it all down on paper over the next two years. Most of the characters are based on friends and family, some who[m] have left this life. This was my way of honoring them and keeping them alive in the hope that my own kids will someday feel connected to them. I feel like our modern culture doesn’t have a way of passing down our knowledge and spirit after we die. So this was, partially, my way of doing that.

BNP: What type of research did you complete while scripting the story and did any of your discoveries make you or Mike adjust course?

Bruce: Quite a lot of research went into writing about the old gods and monsters. This was probably the most fun we had creating the story. We looked at a lot of old mythology books to get the creatures just right. We also took some liberties making some new creatures as described by the ancient god’s war council. The most difficult part of the narrative was setting up the events leading to what is believed to be the start of WWI. We wanted it to be accurate, but also wanted to mesh the story with how to ancient god’s restored their benevolence and started to come back to participating in world events. Probably the area with the most research was the clothing, fashion, architecture, munitions and machines in 1914 Sarajevo. Most of the visuals were pieced together by looking at old photographs and drawings.

BNP: The one unique framing device of the graphic novel is that the narration is told within a sort of “radio play dramatization”. How did you approach blending the longer prose segments within the comic?

Bruce: It’s interesting you recognized that. When I gave the chapters to Mike, he removed much of the narrative and descriptive elements because they weren’t needed after he created the illustrations. I had to not be precious about that, which was kind of difficult for a writer to see words disappearing. It required a huge amount of trust. We trusted each other instantly when he started showing me storyboard sketches. The voice of the narrator, I think, is still present. It’s the voice that we all have that sits behind our eyes that is omnipresent from the moment we open our eyes in the morning.

BNP: What do your hope readers will get out of the experience of reading your work?

Bruce: I wrote the book for my son at a pivotal time in his life, and mine. As a young person having to navigate difficult situations like watching his parents getting divorced and death. He struggled with some indecision about himself and even larger questions about the purpose of life and religion. I hope that he, and other young people, will find some life lessons ingrained in the characters about free will and the importance of what we do for others and how we navigate those relationships.

BNP: Between the two principal characters, Lou and Shiro, which one do you relate more with?

Bruce: Definitely Lou, his character was created after my son.

BNP: What piece of media do you wish more people knew about? Not necessarily your favorite, but a book/comic/TV show/etc. That you think deserves more shine.

Bruce: “The Forged Coupon”, a novella about mischief from Tolstoy, Carl Sagan’s “Cosmos” and anything by Jean Giraud (Moebius), but especially “Edena”.

BNP: Anything you want to share with your audience at Black Nerd Problems?

Bruce: I just want to thank you for your insightful questions and [for] giving new authors/artists a chance to be seen and heard. Much love, BNP!