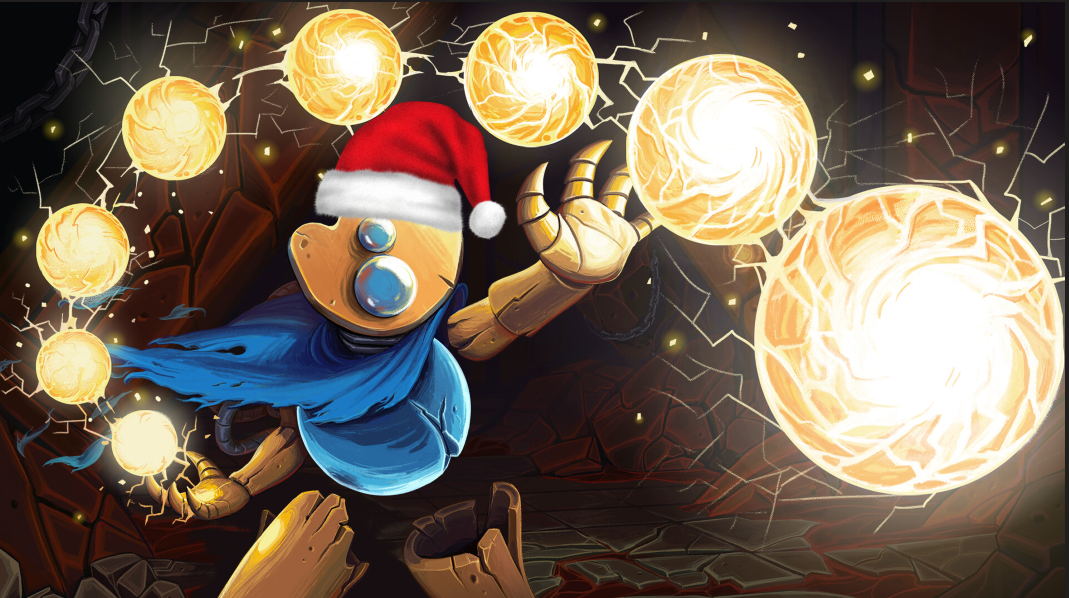 As the holiday season approaches, we take this time to partake in the capitalist tradition of showing our affection and care for others in our lives by the purchasing of digital and physical goods. And as a cynical as they may be, there is something nice about getting something for that special someone, and we here at BNP wanted to take the opportunity to share some of the games we think the gamer in your life might appreciate this holiday season. It’s not a comprehensive list by any means but consider it a jumping off point for the Cyber Monday shenanigans.

Of course, when you’re buying things for others, sometimes it’s a good idea to get something the whole family/community can enjoy. Here’s some recommendations for games that only one person needs to own but several people can enjoy.

You remember that trivia game you saw on 90’s TV commercials, You Don’t Know Jack? Well, apparently, they went on to make digital party games. Lemme tell you now, you buy one pack, and you’ll be set for hours. You buy multiple packs, and you’re gonna be set until the next pack comes out. Jack Box perfected a system where one person owns the game, but multiple people can play on their phones or laptops. Each pack features a grab of games ranging from trivia to drawing to social deduction, and there’s always at least one game you’ll manage to latch onto. –Mikkel

I’m biased as a technical writer, but never has there ever been a game that triggered a guttural response to rewrite an entire game manual because of how intentionally poorly written it was. Originally intended for VR, but perfectly compatible with a PC or Switch, Keep Talking and Nobody Explodes is an asymmetric co-op game, where one player is the diffuser and everyone else is the trusty bomb expert. It’s up to clear communication to quickly save the day. You’ll start up describing odd symbols and then end up reading Morse code by the end. –Mikkel

For the Masochist Roguelike Enthusiast

The whole point of roguelikes is to keep the player guessing, and these entries will have the gamer in your life on their toes like Misty Copeland.

Due to… *gestures wildly around* everything, we haven’t exactly had a plethora of console exclusives despite the next generation of consoles being here (well, as long as you were lucky enough to acquire one at some point). However, I am duty bound to make sure to give a shoutout to Returnal. This game is visually enthralling, mechanically challenging, and tonally terrifying as you navigate Atropros. It’s a much more visceral experience than your typical roguelike especially with the haptic feedback in the controller. The good news is that if you grab it now, you will benefit from a recent major update that allows you to save runs midway through (yes, it’s weird that it wasn’t an option before) and a photo mode. But every death brings new knowledge of patterns and a new urge to get just a little bit farther. –Mikkel

As a fan of roguelikes, a friend recommended Slay the Spire as a potential timesink, and now I’m 1000 hours deep and counting and a disciple of Neow, always at the ready to spread the good word. With a simple starter deck and a single relic, you play as one of four playable characters as you navigate the titular Spire. Easy to learn, impossible to master, Slay the Spire is intuitive in play, but with a plethora of interactions and combos that will constantly surprise you and keep you hooked at conquering the denizens that want to end you. -Mikkel

For the Casual Roguelike Enthusiast

If you like the idea of roguelikes but don’t necessarily want to hone your mechanical skills to utter perfection or compile an encyclopedia knowledge of esoteric interactions, there are games that serve as a much better entry to the genre.

Slay the Spire can be thought of as one of the originators of the roguelike deck-builder game, giving you not just cards to play but the context of an RPG character to play them as. Griftlands evolves the formula, where both combat and conversation can be decided by what’s drawn from your deck as your character tries to keep their back knife-free. – J. Mason

Hades’ high-speed combat discards the deck entirely. In place of cards, earning the favor of the Greek pantheon and its many members earns new ways to play. Roguelikes make death and failure part of their mechanics, unlocking tangible rewards for another attempt. Anyone who’s ever had ‘one more round’ turn into dawn the following day, get ready to meet your newest addictions. – J. Mason

Kids Just Want to Have Fun

Shopping for your children can be daunting especially when it comes to video games. You don’t want to be that parent or relative that gives them some bargain bin knockoff of the latest game. However, if you’re not in the know, what do you know? Thankfully, we know. If you want to guarantee that your kid has a good time, here are a couple of games that can get the job done.

Back in 2005, Double Fine’s Psychonauts charmed the heck out of everyone with its quirky characters, premise, and stellar platforming. Sixteen years later, Psychonauts 2 has finally arrived and doesn’t miss a step. It’s almost as if Double Fine took an “If it ain’t broke,” approach and refined what they already had, which works to their advantage. Every level is an amazing dreamscape to wonder through and filled with its own unique set of challenges. Psychonauts 2 is more than just an excellent game. It’s about as creative as a game can get. That’s because it wants you to enjoy your time with it, making Psychonauts 2 one of the best games I’ve played all year. –Chris

Ratchet and Clank has been going strong for 19 years and shows no signs of stopping. This year’s Ratchet and Clank: Rift Apart made a great showcase for the PS5. If you happen to snag one for your kid, this is the game to get. In our review, we came away impressed with how much it takes advantage of the PS5 hardware, letting players instantaneously jump from one world to the next. It meshes perfectly with the series trademark run and gun gameplay as you blast your way through hundreds of enemies with a variety of wild and crazy weapons. It just goes to show that there’s still life in that old PS2 era of mascot gaming. –Chris

For the Old Heads

There is no school like the old school. We all have people in our lives who can’t quite let go of the past. Thankfully, that just makes it easier when it comes to shopping for gifts. When it comes to video games, there are plenty that scratch that old school itch. Here are a few suggestions for that retro fiend.

[Insert Jadakiss Laugh] The streets are calling! Let me paint a picture for you. It’s 1991, and you’ve just blown the dust out of your copy of Streets of Rage. You insert the cartridge into your Genesis and that sweet, sweet soundtrack starts playing. Now you only have three choices with who to lay the smack down with – Adam, Axel, or Blaze. Now, it’s the future and the retro gods have brought us the long-awaited sequel. Last year’s Streets of Rage 4 made waves as the perfect follow up to the classic beat’em up. It hits all the right notes for retro head, from the tight gameplay you remember to the dope ass soundtrack to crack skulls to. -Chris

Okay, I know what you’re thinking…a remake? Damn. YES DAMMIT! A REMAKE! You know the vibes! Three starters, the sudden call for adventure, and to top it off a customized rival name (so you can handle that secret beef you got with your coworker). Now you might be thinking, “why would I buy something that came out years ago?”

*mockingly* For nostalgia that’s why!

Sinnoh needs you to stop playing games, pull through with the Piplup, and bubble beam Team Galactic in their Pokémon grubbing hands. Admittedly, this is my first-time playing Diamond and Pearl. At midnight, I waited patiently for the game to download as my partner slept, so that I could squeal and nerd out under the covers for hours. What makes Pokémon so appealing is that for kids it’s a fun adventure, with memorable creatures they’d love to hug or ride on their backs to victory. For adults, it’s all of those things along with a hilarious dialogue filled with character tropes and the imagination we had to sacrifice for capitalism we always had buried in us all along. –Khadjiah J

For the Non-Digital Folks

Also, while we love video games here, we always want to take time to spotlight some things that can be played around a physical table (we need to have hope in that way).

Machi Koro literally translates to “Dice Town” and as such, me and my friends have a running joke where we talk about it as though it were an HBO Prestige Drama. Dice Town, where different towns are run by extensive gambling network to buy natural resources and establishment to build four monuments to prove their dominance. It’s a lot less intense than that I promise. Machi Koro is a nice low-key game that’s easy to learn with a wonderful aesthetic and is much less competitive than the violent capitalism of Monopoly. -Mikkel

Ever wanted to dive into a dungeon without the complexities of role playing? Well, Munchkin’s got you covered. Munchkin is a simple game where several players basically race to the end of a dungeon. As the game puts it – kick down the door, fight the monster, grab the treasure. Every monster defeated gets you one step closer. However, other players can help or hurt your chances at defeating it. Every time I play, Munchkin has probably been some of the most fun I’ve ever had playing a board game. It doesn’t take itself too seriously, and there is plenty of loot grabbing and backstabbing that will make any session with friends an eventful one. -Chris