Now you know when they give you the WHOOOOLE season recap before the episode starts that some epic battles and traumatizing shit is going down in the season finale!

So Zoom done chopped up Poppa Henry Allen, the second greatest dad on television, all up in Barry’s face. You know villains and their desire to turn all good things evil? Yeah, Zoom is on that tip. Barry sobbing all over the ’96 Ikea furniture and linens. Nah, let me stop being petty, this was some serious ass pain that Barry went through. He just got the ol’ man back and Zoom gets all maniacal on our boy. That top notch race and battle through the streets though?! These show runners have perfected these scenes when they go down. The Flash eventually catches Zoom and starts putting the Bruce Lee BEATS on the Earth-2 evildoer. Filled with rage and vengeance, Barry is inches away from killing Zoom but holds back when Zoom slices through his own time remnant (that he had created seconds earlier during their race through the streets) and tells Barry that he’s almost ready. Uppercut dash and zoom out of there.

They hold a beautiful ceremony for Henry Allen as the CW soft violin music soothes us and Joe delivers a heartfelt speech. Barry’s so caught up in his feelings he cant give a eulogy. Instead, all he can do is drop Euron Greyjoy lines over his father’s grave. “Where is my nemesis? Let’s go murder him.”

Then we got Wally who takes the first chance he gets, turns into a Flash fanboy and thanks him for his sacrifices. Barry just standing there like, “Yeah, I does this.” Team Flash in the cut discussing ways to stop Zoom and they all just standing there staring at each other like a group of teenagers trapped in a cabin at Camp Crystal Lake.

Barry goes outside for some air. Iris follows suit. *Cue the piano music* Zoom got Barry out here trippin’ because he had finally accepted his mother’s death then had his father slaughtered before his eyes. The realest shit he ever felt. Zoom whips on by and Barry chases him down, of course. Zoom lays down a challenge. One race to end it all.

S.T.A.R. Labs: Team Flash is discussing the legitimacy of this offer when Harry Wells, the bringer of all melancholy, the mood murderer, the sunshine eliminator, flings his 2 cents into the mix when he mentions that Zoom is a lying sack of moose shit. He’s 99.98% sure that Zoom stole the Magnetar that was being developed by Mercury Labs which can act as a pulsar. What is that, you ask? A power amplifier with a highly magnetized dense rotating core. What could that do, you ask? THAT GETS WEAPONIZED. AKA with the right power source (the siphoned energy from the Flash during the race) he could use the Magnetar take out all the planets in the multiverse. Barry shoots back with the last response that should’ve been dead last on his Bad Responses List: “I have to race him.”

Barry dons his costume and is ready for war! He’s down in the basement getting his Pre-PPV fight night mind right when Joe West, the greatest dad on TV, tries to talk him out of this extremely evident trap that Zoom has laid out so openly that it would take a Forest Gump level of idiot to miss it. We all know the Flash these days though. As dumb and cocky as ever. That’s what friends are for… ZAP! Barry gets shot with the The Boot and sedated by his crew. He comes to, in a Pipeline cell wondering how this all happened so swiftly. He on some “Et tu, Cisco?” shit. The team knows what’s best for him. Now whats best for the team… that’s up for debate. They come up with a plan to take down Zoom, sans Flash. Caitlin lures Zoom out into the open so Joe and Harry have a decent shot. They hit him with The Boot, Cisco opens up a breach and Joe has a rare fuckboy moment! His gun jams and he has to go erase the fuckboy from his tarnished name. Homie grabs the tranquilizers like grenades and runs out there straight Rambo status. Joe shanks Zoom with the double-fisted tranq flow while Harry Wells comes flying in with the follow up Max Payne shot that sends Zoom through the breach. But not before yoking up Joe as both get sent back to Earth-2.

Earth-2 Ascension Cliffs: Zoom has Joe chained up lookin’ miserable. But there was one more person in the spot looking a lot worse, the man in the iron mask. Joe asks who it is and Zoom being the brag king that he is, finally reveals what we’ve allllll been debating for the last month or two. Turns out Zoom has been to quite a few places in the multiverse. He even hopped over to a little place called Earth-3 and imprisoned that planet’s Flash. He tried to take his speed, but it didn’t work so now he lets the sad sap sit in a cage as an interplanetary trophy. And that man in the mask, ladies and gentlemen, is the real Jay Garrick.

S.T.A.R. Labs: Iris has to break the bad news to Wally and he doesn’t take things very well. Actually, he takes things so badly that he somehow manages to sneak away from the ENTIRE group to release Barry from The Pipeline. Barry comes storming out demanding a trial by race! Cisco vibes Barry to Zoom’s crib and accepts the race challenge.

The location is staggering. The rules are simple. Every planet in the multiverse but our focal point Earth-1 is on the line, and this piece o’ shit Zoom steals our boys hype music when he says:

They’re off to the races. Zoom got the homie by a few feet but Barry gaining on him. Barry feeling himself. OH BARRY DONE CREATED A TIME REMNANT OF HIS DAMN SELF? Oh yes he did, folks! Looks like our boy is ready to do whatever he has to if he wants to take down the bad motha shut-yo-mouths he’s gonna face his whole life. One Flash continues to chase down Zoom as the other frees Joe. Zoom is caught but it’s too late. The multiverse is already starting to open up like a pregnancy fully dilated. Good thing the Flash has become an absolute boss and master strategist because he already knew he would have to do some crazy shit to save the day, including sacrifice his life… or his time remnant’s life to be exact. The remnant circles the base of the Magnetar repeatedly and creates his own pulse in order to counteract the phase of the Magnetar, even though he knows that his body could never survive AKA the time remnant just killed himself to stop this “apocalyptic destruction of an infinite number of worlds” shit from going down!

The Flash now has to take some action before this power-hungry mongrel Zoom gets away. What happens next was the biggest surprise for me all episode: the Flash beats the evil psychotic snot out of Zoom’s punk ass! Surprise, surprise. The new master strategist had a hunch that going to grab that time remnant might rub the Speed Force enforcers the wrong way and homie would be a rich man in Vegas with his odds tonight! The time wraiths come ghoulishly floating out of their breach, eviscerate Zoom’s body, yoke that boy up and haul him off to face The Speed Force justice.

[title type=”h4″]Late episode shockers[/title]
The team releases the man in the iron mask from his confinement and Jay Garrick winds up being the doppelganger of Barry’s father, just like we predicted 3 weeks ago. Barry is bugged out by seeing his father again so suddenly and unexpectedly. Luckily, OG Jay Garrick is eager to get home and the team gladly helps him get there.

For now being dubbed the master strategist, Barry sure makes some dumb decisions. This guy is really going to go back in time and save his mother and expect everything to be okay? Ya’ll just gonna sit there sippin’ hot cocoa, Barry? Telling your mother how much you missed her? I don’t approve. It’s extremely frustrating but I understand as someone who has lost one of his parents. Plus, it capped off an amazing season finale. Could I have gone for a little more action? All the way YES. But the finished product was superb so I ain’t even mad… although I know somebody who might be! 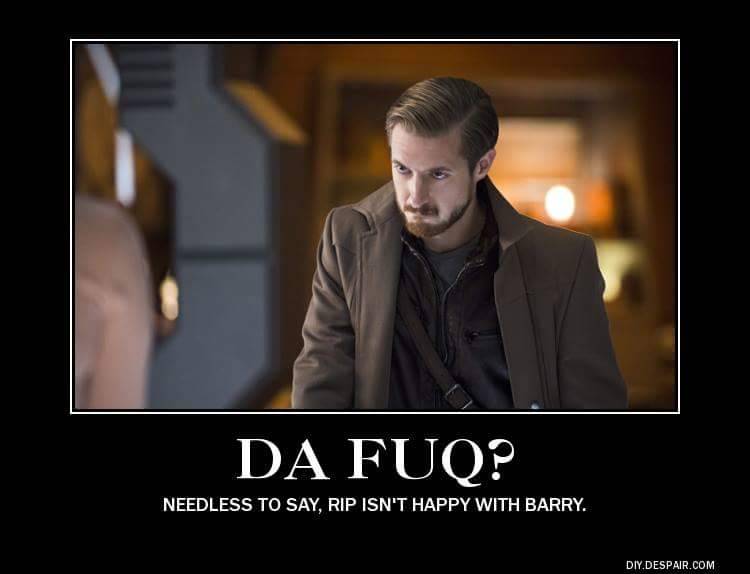 [title type=”h4″]Flash Facts[/title]
That was pretty steamy and romantic kiss between our now openly loving pair in Iris and Barry. Too bad Barry needs to take some time to go ruin the timeline!

The world to Barry right now:

Harry called Cisco by his first name for like the first time ever. It was adorable.

Harry and Jesse are back off to Earth-2. Don’t think this will be the last time we’ll be seeing them though.

Flashpoint: It’s looking like we might get the Flashpoint storyline in season 3, which leaves open a whole lot of crazy possibilities.

It was a hell of a season 2. Catch up on all of our previous recaps here!