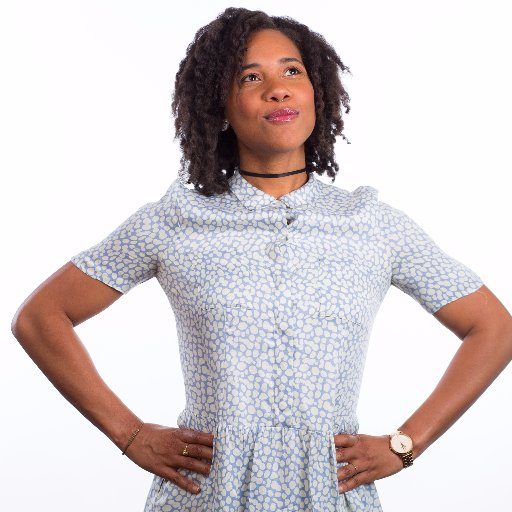 Soft spoken Che Grayson commands the stage in her TED talk video with her focus on the power that fictional characters, super heroes even, wield and how they inspire us. (Also? She killing it with that outfit. That look surely is Pinterest worthy!) Looking back at her video I couldn’t help but immerse myself into her presentation as she spoke on being the super hero we need, as the title suggest. I was able to chat a bit with Che and learn more about her through her work and what has inspired her.

Black Nerd Problems: As a film maker, comic book creator, writer and nerd what is the importance of a good story? What do you feel is the significance of story that audiences and readers gravitate to and enjoy?

The importance of a good story is to have the chance to be exposed to a world much bigger and different than your own.

Che Grayson: Stories saved my sanity growing up. Any time I needed an escape from feelings of alienation and otherness, all I needed to do was pick up a book and wrap myself up in the characters and the world. The importance of a good story is to have the chance to be exposed to a world much bigger and different than your own – and maybe even to believe that you’re not alone. I think audiences gravitate to a story because they see either a piece of themselves or who they aspire to become in the story. 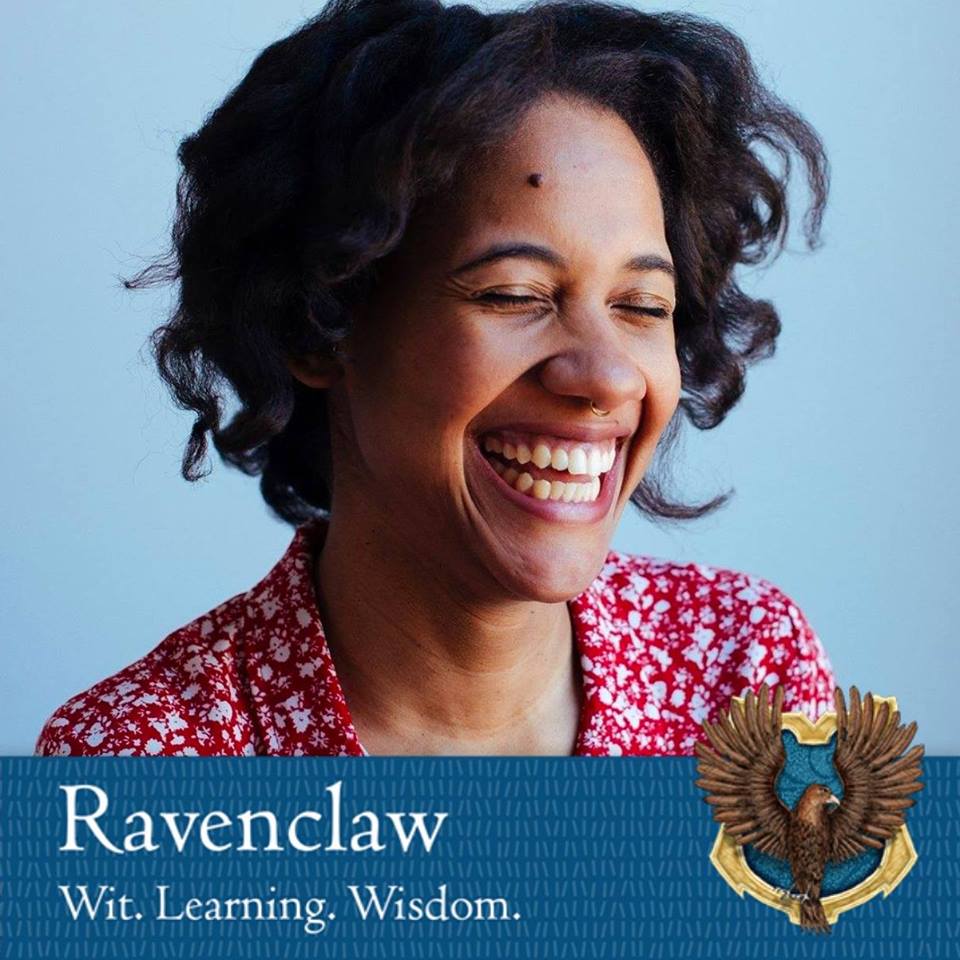 BNP: We’re both BIG Ms. Marvel (Kamala Khan) stans, I see. *Emibiggen Hand Fist Bump* Have you been reading up on how she’s grown and branched into other teams outside her own book like the newer Champions? And while we’re on the topic of comics, as you so eloquently described as “the cave man paintings of our generation” what comics, mainstream or indie stood out to you last year that you’d recommend?

Grayson: Yes! I absolutely love Kamala. She’s so funny and so fierce and as someone who grew up and one of the only people of color in the suburbs of Long Island, I totally relate to her experience being a Muslim girl in the suburbs of Jersey. I actually haven’t had a chance to read Kamala branching out (I have a lot of catching up to do) but I definitely look forward to seeing her in the context of the larger Marvel universe.

As for other comics that I’ve ready lately – I’m really into Indie comics mostly: Bitch Planet by Kelly Sue Deconnick and Clean Room by Gail Simone are my absolute favorites. You can also never go wrong with Brian K Vaughn, specifically Saga and Paper Girls. I also adore Moon Girl and Devil Dinosaur and had a blast reading Monstress.

BNP: If 2016, as tough as it was a year, has taught us anything is that 2017 is a year to not sit back or take it easy in any regard. 2017 must be a year of working harder to make sure hate isn’t normalized further and that everyone deserves basic dignity and to not have their humanity checked constantly based on the grounds of their skin color, sexual orientations, religion or faith, etc. With this in mind, what else would you say those who want to be superheroes in this day in age? What else, if anything would you add?

Grayson: For anyone who wants to try and be a superhero/superheroine, or their best selves, I would just say to never be silent. Silence is deadly. And to surround yourself with people with different perspectives than you so that your exposure can broaden and hopefully your compassion too. And I know we all get tired sometimes, and can feel utterly hopeless, I would say make sure to practice self-care as often as you can. I think it would be impossible to be a superhero if you didn’t prioritize self-care as well.

BNP: I saw that you were tweeting about finishing up watching Queen Sugar—what’s the importance of seeing more women, especially Black women visible in the film industry as directors? As we see, love and keep seeing Ava DuVernay on television, in the headlines and in conversations about the place of women as creators (and seeing her bring other women to opportunities) what do you think she’s bringing to the table as one of today’s leading creatives?

Grayson: I think Ava DuVernay is a gift from the gods! She honestly is at the forefront of contemporary storytelling and I think seeing more women at the forefront who I feel look like me and challenge the status quo is completely vital for me as a filmmaker. It’s important to the next generation of filmmakers to see not only a POC woman break the glass ceiling but to, most importantly, to creating a community of people who will help continue to subvert the status quo, which I think she’s doing. It’s not enough to just accomplish on your own, I think it’s also our duty to make it so that in the future POC women directing films is no longer a novelty.

It’s not enough to just accomplish on your own, I think it’s also our duty to make it so that in the future POC women directing films is no longer a novelty.

BNP: I also see that you’ve studied under the mentorship of Kasi Lemmon, another Black female director who was at the helm of one of my FAVORITE films of all time, Eve’s Bayou. What are few of your favorite films and directors that influenced you as a film maker and artist?

Grayson: Before Kasi Lemmons was my mentor I was just a huge stan. Eve’s Bayou was definitely an influential film for me both narratively and aesthetically. Lynne Ramsay and Andrea Arnold are also women who have blown my mind with their work. Every filmmaker has to watch Lynne Ramsay’s short films and Andrea Arnold’s film Fish Tank. Alien is my favorite film of all time and could do a whole TED talk about how incredibly feminist that film is. And I’d say that Guillermo Del Toro is my all time favorite director because he plays a lot with my favorite genre, magical realism.

BNP: So, I know you are the creator of Rigamo, a comic book that features a black girl lead but also an animated series titled Scatterbrains, toted as a “psychedelic space odyssey”. What can you tell us about those two projects and why they are important to you?

Grayson: Rigamo was my response to the death of my aunt during a time where police brutality against Black people was being heavily highlighted in the media. I felt powerless and that all I had were my grief and my tears, that’s when my character Kera Moore originated from. I thought, what if a young Black girl could bring people back to life with her tears. It felt very empowering to imagine a superhero like that. But of course her power comes with a huge sacrifice (it takes years off her own life and ages her every time she uses it) the story of Rigamo was incredibly cathartic and also Kera was before Riri Williams and just proves that there needs to be more Black women conceiving Black characters in mainstream comics because while Kera actually looked her age Riri of course is problematically distorted to look ten years older than a teenager realistically does.

I did Scatter Brains to explore a story that was on the lighter side of things. My main character is Ava and she a curvy, brown-skinned alien who’s not afraid to kick ass and take names and actually loves food (just like me) I also have other character, Kit and Kat who are twins, Kat is non-binary and I think it’s important to look at womanhood through an inclusive lens so it’s fun to make characters in all genres who address the complexity of our identities both in the Black community and as women. 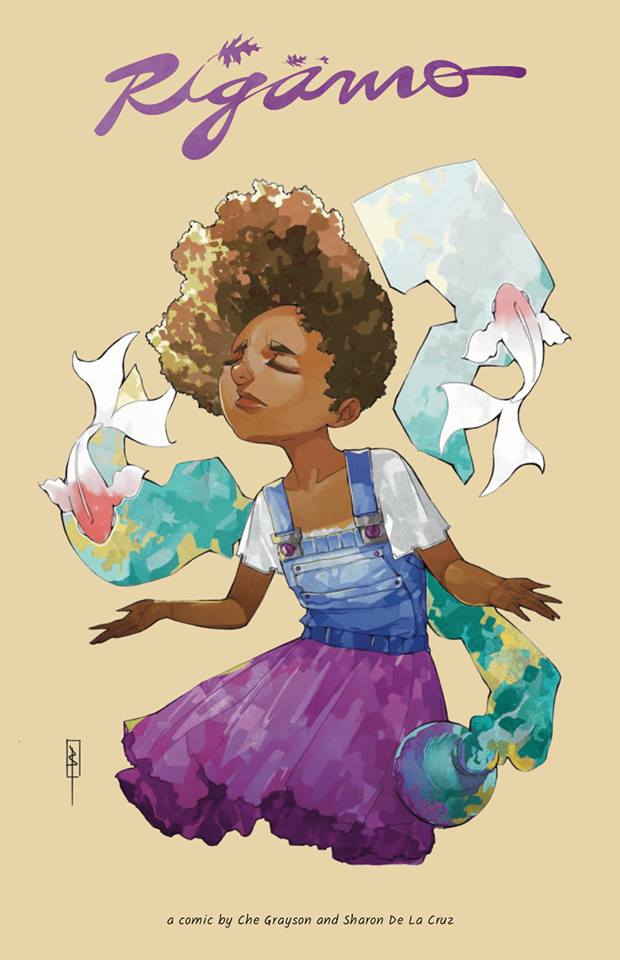 BNP: Both projects sound incredible! Can you elaborate on Rigamo which is a mutli-media creation?

Grayson: So Rigamo is both of a comic series and a short film. The short film runs 12 minutes and then ends on a cliffhanger and then the comic book picks up where the film left off. It was really fun to work on the same story in the two mediums I love most, film and comics. Rigamo premiered at River Run Festival, which was a lot of fun. Also the Black Star film festival which was in Philly, which was probably my favorite because it was a festival dedicated to Black and African Diasporic stories and creators. It also had it’s international premiere at the Kerry Film Festival in Ireland, which I had the chance to attend and also happens to be the place I’d like to shoot my first feature.

BNP: R.I.P. to one of my “space moms”/ one of my favorite Princesses of all time: Carrie Fisher! What con were you at when you met her AND Gary?

Grayson: I’m crying as I try to answer this! I met Carrie at NYCC 2016 and it was truly one of the most glamorous experiences of my life. She was glowing and she smelled like heaven! And that photo with her is something I will always cherish.

BNP: What are your big plans for 2017? Anything you can hint at? Lastly any cons or big events people can find you at this year?

Grayson: So I have some pretty cool things in the works. For the first time I’m actually getting paid to write. Two comic stories for two different anthologies and I get to write about amazing young Black girls and women (can’t say for who yet, but it’s pretty big!) I’m also in development for my feature film debut, Red Bones, which I’m trying to shoot in the Summer or Fall of 2017, will most likely be a Kickstarter in the works. Fingers crossed!

See more of Che’s work online at her website here.