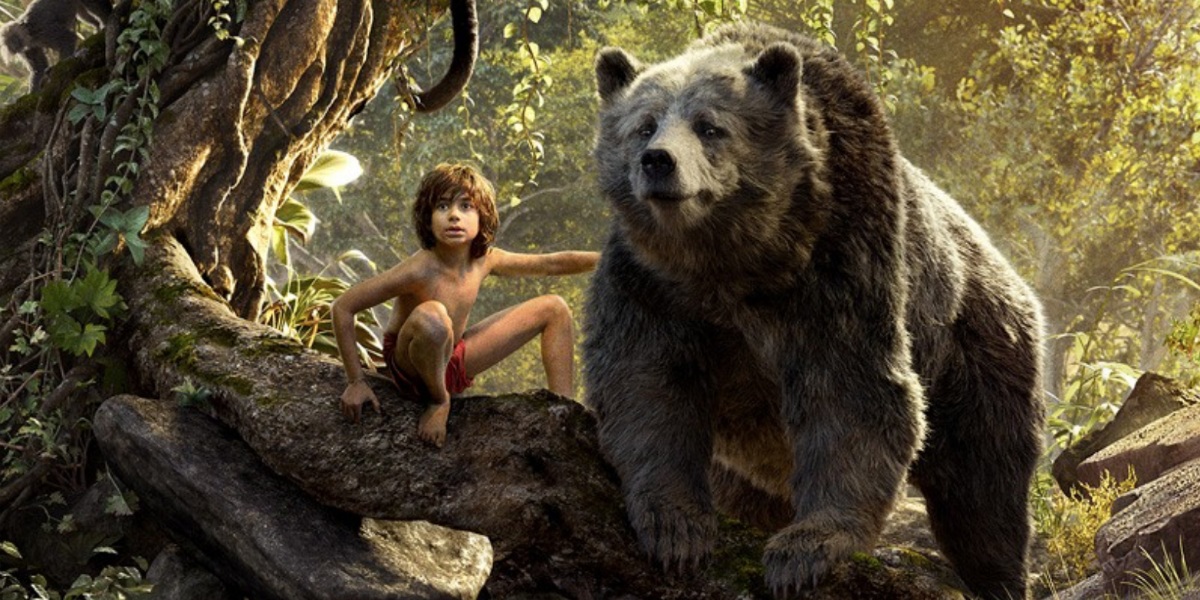 There’s something to be said about constantly reliving your childhood. I’m going to be honest with you: I never believed that the day would come where all of my favorite childhood and adolescent things would be remixed and repackaged for consumption in 2016. Which is to say, I never thought I’d be/feel old. Yet and still (redundant, I know), Disney has done it again.

The Jungle Book is Disney’s newest remake and I’m all the way here for it. They were drawing me in when they leaked Lupita Nyong’o and Idris Elba as voices of the characters and they completely had me when they released the ad with them and the rest of the cast next to those amazing animals. That was complete badassery. Now that I’ve seen it in 3D? Yo! The Jungle Book is flipping gorgeous! Rudyard Kipling has to be doing somersaults somewhere in the clouds. 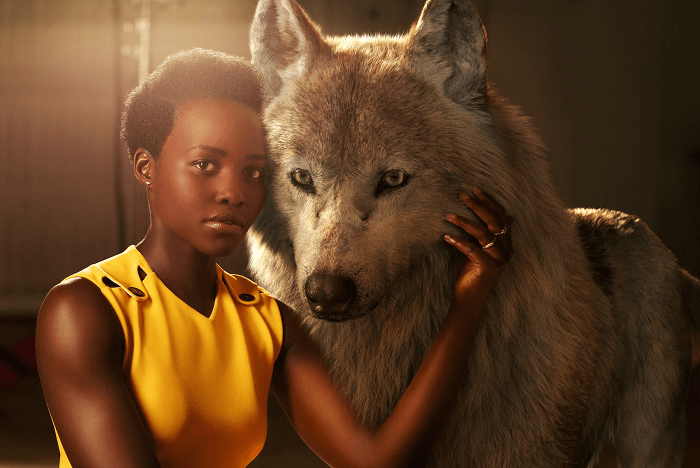 When Disney decided to take the 1894 classic that was written for Kipling’s eldest daughter and turn it into animated glory in 1967, folks lost their minds. It became an instant classic with voices of the heavy hitters of that time. I can’t tell you how old I was when I first saw The Jungle Book, but I know it was my great grandfather’s favorite Disney movie (outside of Fantasia). I have vivid memories of him toiling over his plants while whistling “Bare Necessities” and of me squeezing these kiddo hips next to him in his favorite arm chair after running and hitting play on the VCR in order to shriek from Kaa’s mesmerizing stare one more time.

Watching these scenes brought back to life through CGI was breathtakingly refreshing. The nostalgia is not lost in this adaptation, but for me it was enhanced. If you see it in 3D like I did, don’t look for any of the characters to jump out at you (unless you sit and watch the credits roll). The 3D in this aspect gives you the feeling of sitting in front of a 70 foot 4K Ultra television. The details are sick! I couldn’t believe the look of the water as Mowgli sat upon Baloo’s belly floating down the river. At some point, I think I actually reached out to dip my hand in. It glistened as though the sun was shining upon a million diamonds. The realism will leave you awestruck. 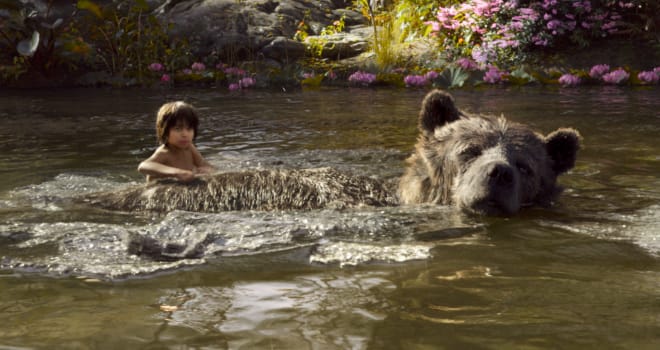 I feel like the animation really kicked in during a scene reminiscent of The Lion King where Mowgli is trying to get away from Shere Khan in the midst of a terrifyingly terrific stampede of water buffalo. Some of the darkest and most intense scenes turned out to be strikingly beautiful. Deep in the darkest part of the jungle, Kaa (Scarlett Johannson) is all up in Mowgli’s face lulling him into her cunning prowess, damn near choking homeboy to death and it’s both tender and frightening. Her tale of “the red flower” is stunning. Each and every animal is personified to the tenth degree. Speaking of tenth degrees, wait until you get a load of King Louie. That narcissistic singing orangutan from the 1967 animated version ain’t got nothing on this Hulked-up Christopher Walken King of the Apes. I have to say that no one could have played a better Baloo than Bill “I don’t hibernate, I just nap a lot” Murray. It’s like they gave the animals the eyes of their actors, but Baloo’s facial expressions? I swear, no one else could play the slothful uncle-type bear better than Murray.

The remake also gave way to erasing the underlined racism that could originally be found in King Louie’s character, who in 1967 was written for Louis Armstrong. Yes, you heard me. Louis Armstrong was to be depicted as an ape. *unrelenting side eye* Thankfully, this version’s King Louie left the racial stereotyping in the 60’s and allowed Christopher Walken to make him as ambiguously creepy as most other Christopher Walken roles. The Jungle Book of 2016 brought in more female voices than were cast in Disney’s original animation and — thank all of the gods — brought in more than just white male actors for the lead roles. Neel Sethi, a kiddo of Indian descent, cast as Mowgli, a kiddo of Indian descent is likely baffling to the cast of The Gods of Egypt and for good reason. *insert additional side eye* 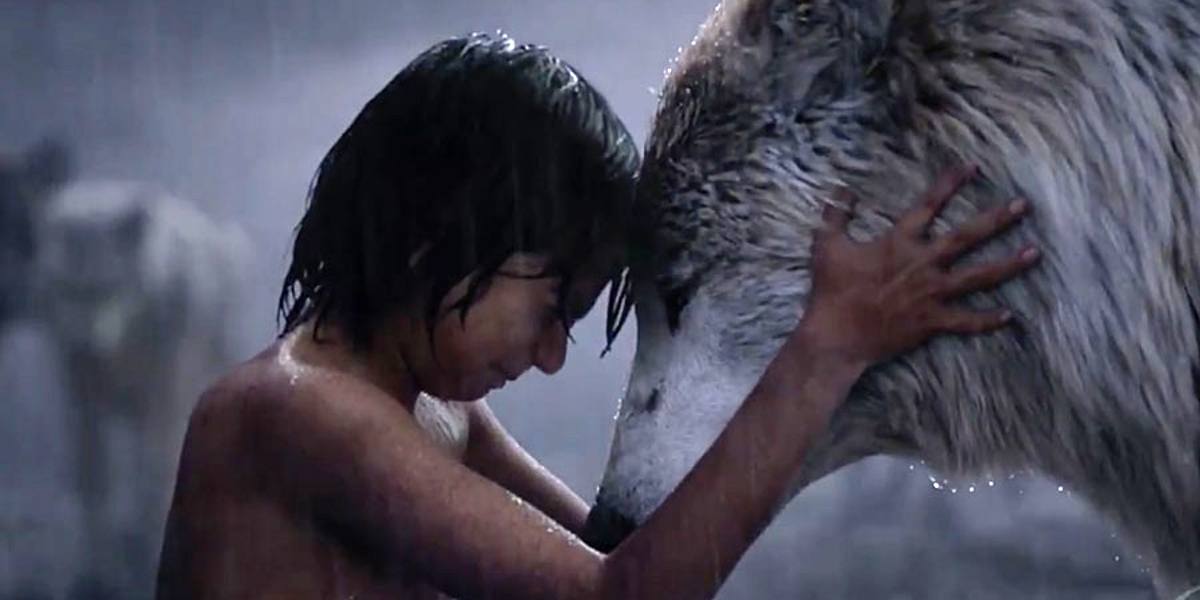 I don’t want to give it all away, but listen… If you’re looking for the CGI tricks and surreal cinematography of Avatar, give it up. If you’d like to see a beloved classic evolved into a star-studded gem of nostalgia wrapped in the velvet yet stern mamma’s voice of Lu’Pita topped off with bravery and love, pay a couple of extra dollars and see The Jungle Book in all of it’s 3D/4K Ultra HD glory. See it, experience it and let the future continue to pay beautiful homage to our childhood. Amen.