Back when we thought we were a long ways from another rebirth of the DC Comic Book Universe — mostly because we just had one — DC started putting out animated movies that reflected their most recent reboot. The first was The Justice League: The Flashpoint Paradox, a very loose and bloody interpretation of The Flashpoint event in the comics, namely the story of The Flash rearranging the timeline to the one we presently have. Paradox the animated movie? It was terrible. But that’s not really the point, it was marketed brilliantly and set up the next series of films to do a pretty specific job.

I love comic books and I love comic books in motion, but even I can admit that the saturation passed ridiculous a while ago. Marvel got spin-offs for its spin-offs while DC finds a more obscure protagonist to give a whole TV show every month. Anybody else from DC you might have an interest in has probably appeared on Arrow at this point. And still, the big dogs have always been, and will always be, the major release movies. Despite how they bill it, DC at least wants the box office sales and critical acclaim that Marvel gets, even if they think they can get there with a completely different philosophy. What they do share however, is the propensity to make movies inspired by somewhat older comic book stories that are populated in the most monochromatic ways.

While Marvel is doing a greatest hits of recent storylines they have licenses to (as long as it occurred at least a decade ago — Civil War was 2006-07), DC seems poised to do the darkest and most serious storylines from their main protagonists. This is where the DC Animated movies try to pick up the slack that the major motion picture studio can’t, or rather is unwilling, to carry themselves.

I totally understand why comic book films move towards older storylines. Serving as many masters as a comic book movie demands is pretty tough to pull off, but obviously has a huge payoff. Your old school comic book fans weigh in first (“Oh man, the Ragnarok storyline is one of Thor’s best, you should be excited for that!”). Non-comic book fans don’t know what’s new or old, and hell, half would probably be surprised that new comic book storylines exist. If your audience consists mostly of comic book snobs who can tell you exactly when the Silver Age ended and non-comic book fans who just want to see a flawless-looking Henry Cavill fly through a flawless blue sky and punch a bad guy through a building, then doing old story lines is a pretty easy call.

Also, for DC, there is so much venom that exists for the 52, if you put a $150M budget based on one of those storylines, you have no idea how hard you’ll have to work to get that back at the box office. The DC Animated Films have attempted to make up this ground by focusing exclusively on story arcs after the jump, so to speak. Justice League: War, Son of Batman, Throne of Atlantis, Bad Blood, etc; all films that have been released in the last couple of years, all films that come from storylines in the 52. While I don’t disagree with the masses who feel the whole of the 52 lineup has been disappointing, there are some definite gems that stack up against the best of DC’s catalog. Stories like Azzarello’s Wonder Woman arc, John’s Justice League (which have 2 films already, let’s hope they make it to Darkseid War) or the surprisingly great Grayson (that spun out of Justice League’s Forever Evil). All these are the types of stories you want to see movies about in some capacity. Of course, let’s not forget Snyder and Capullo’s Batman, possibly the best comic book run in DC’s history since John’s Green Lantern run. Speaking of Batman…

Till the Batmobile’s Wheel’s Fall Off

You’ll notice there’s a common theme for all these DC Films so far. Dat dude in the cowl. It’s basically been two Justice League Films (with Batman, of course) and a bunch of Batman films. I’ll talk about diversity later, but it sure as hell don’t apply to which movies the animated films put out. Now, this isn’t a strength of the animated films, and to be honest, it’s pretty damn annoying. What it is, is pretty damn smart. Doesn’t matter that Superman is the face of the DCU movies right now — for at least the last decade, Batman been ruling from the iron throne and that ain’t gonna change anytime soon. You dance with the one who brought you, and Batman is responsible for DC’s current popularity outside of your diehard DC fan who has every issue Gail Simone wrote of Wonder Woman.

Beyond the shrewdness of riding Batman into the ground (or cave), there is a mathematical reasoning for this. In the DC comic book catalog, there’s just a lot more Bat-books than anything else. If you’re sick of Batman, that sounds like a self-fulfilling prophecy or the snake eating it’s own tail, but the delineation of the of the animated films coming from a huge catalog of Bat-books isn’t exactly nonsensical. And still, seeing the Court of Owls in motion is one of the coolest things I’ve seen from DC in the last couple of years… even if they felt the need to give Dick Grayson’s storyline to Damian (don’t get me started). So, yes, it’s annoying to be pounded over the head with All-Batman Everything, but from a business stand point it makes sense… annoyingly. 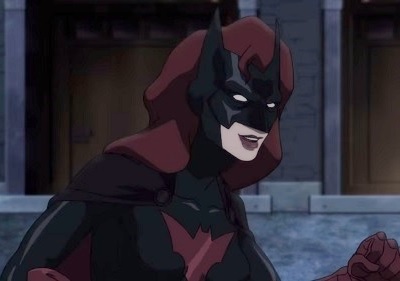 I know, I know, we are getting (notice the use of future tense here) more diversity coming in DC’s major motion pictures. Aquaman (who makes sense to be portrayed as Polynesian) and Cyborg (one of DC’s few Black superheroes) and… damn, did I run out already? Considering that DC is more than happy to keep their TV and movie properties separate, we can’t even give them credit for the work that The Flash, Arrow, or Supergirl are doing with diversity (all White leads in those trailblazers, but whateva). Dwayne Johnson bailed them out by choosing to be Black Adam (who is Egyptian anyway) instead of Billy Batson, but that’s not even a DC film, per se (it’s New Line Cinema).

Fast forward to the most recently released Batman: Bad Blood that prominently features Kate Kane as Batwoman and Luke Fox as Batwing, and that film has more diversity in its third act than the first two DC major releases by the time Superman and Batman have beat each other enough to call it a truce in Batman v Superman. It can’t be understated that Kate Kane isn’t just acknowledged as being gay in Bad Blood; she has dedicated moments of flirtation, initiation, and romance with another woman in the film. How long before we see a hero do that in a DC film that’s live action?

Now, maybe that’s just an amalgamation of the current comics’ focus on diversity or a more cynical approach; maybe its a heat shield when people complain about the lack of diversity in the major films thus far. DC could’ve done anything in the world they wanted to with their reboot of the movies, and their holy trinity is still White as the Oscar nominations. Even when the push was for Green Lantern to be represented by John Stewart in the next films, they went Running Back by committee and announced Green Lantern Corps. With all the Green Lanterns out there (literally hundreds) if we get four or more protagonists and 3 or more of them are White dudes (like Hal, Guy and Kyle), we gotta call bullshit on all of this.

Now, an important question I haven’t spoke on: are these animated films actually good? Ehhhh… some better than others (way too much focus on Damian for my tastes), but that doesn’t really matter, sadly. This is good business. You build continuity with the films having the same animation, voice acting, and in-sequence storytelling. You keep your most popular character at the center of them all and you throw some meat to those howling for diversity.

I don’t think any of these movies have been as good as the generation before that included Under The Hood, Dark Knight Returns I & II, or dare I say, All-Star Superman. But they don’t need to be. Because I’ve watched every one of them. And for every bad decision they make, I go, “But Wonder Woman’s owning this Justice League film” or “Oh my God, that’s Snyder and Capullo’s creation” or “I can’t believe they letting Grayson do work like this.” And sometimes, those moments are all you need to grab on to. Even if it’s exactly what a corporate conglomerate like DC is planning on.