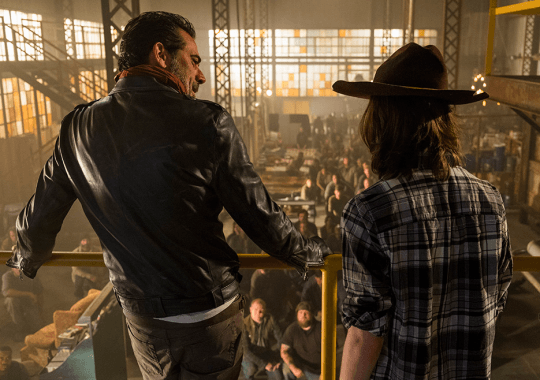 If I am forced to watch while one and then another of my friends is beaten to death, almost have my arm cut off, and watch my fathers spirit break…

If I leave my home, my father, my sister, my adoptive mother with the flawless skin, and my I-eat-raw-meat-and-watched-my-parents-die girl…

If I hide out in the back of a hot ass box truck, convince a dude who looks like he does nothing but deep condition his beard and moisturize to jump out of a moving truck, and find a conveniently located box of guns…

If all of that happens and you are the person at the end of my hero’s quest, you are going to die. No questions asked. Let’s assume I asked and answered those questions while I was walking to Hilltop (minus the time I spent wooing Enid). Or while I was in the truck.

So why, why, why did Carl have a gun pointed at Negan and not kill him?

In what world is that a reasonable turn of events? Carl shot his own mother and he can’t shoot this motherfucker? [looks longingly at the door]

Sure, I guess that’s totally reasonable.

The rest of the episode was Carl’s first day as a intern at the Savior Sadness factory. He shadowed Negan as he maimed, mauled, humiliated, and sexually assaulted almost everyone he came in contact with.

We got to meet his harem of wives, if “wives” is Latin for women coerced into sexual servitude through fear and intimidation. We, the watchers, are supposed to understand that Negan is a man with a code: he says explicitly that he has never hit any of his wives. Sherry then delivers that trauma-survivor realness: There’s worse things. Like making a woman believe she’s responsible for the full face scar the man she loves will wear for the rest of his life.

The worst thing Negan did to Rick wasn’t killing his friends, it was making him understand and accept that he would cut off his son’s hand because Negan told him to. That’s the thing that broke Rick; that’s why Rick is about to spend episode 8 trying to pay his taxes. Sherry knows exactly how Rick feels. So does Dwight. Daryl is getting there. Carl sees this: the wives, the iron, Daryl in what amounts to a prison jumpsuit with a mop, his father broken, and the opulence of Negan’s private quarters. And what does he think of it? It’s a stark contrast to his father’s current position.

But like any boss drunk with power and/or abusive people, Negan oscillates between friendly and frightening. One minute he’s pep talking his subjects (and “giving” them fresh fruit without warning) and the next he’s forcing Carl to take his eye bandage off so he can ogle both the gaping socket and the boy’s embarrassment. And so I come back to this question, why didn’t Carl kill him? It wasn’t a lack of desire. Because he kept threatening Negan.

Simpler is why Negan didn’t kill Carl. He says because Carl is a badass, but it seems like he’s bored. He doesn’t kill Olivia when Olivia spurs his advances by slapping him because it was unexpected. Everyone bows kneels to him. Everyone gives him what he wants, including their bodies. Everyone kills themselves to deliver the best of what they have. So what do you get a man who has everything? A pet, evidently.

Because Carl wasn’t willing to give him the fade.