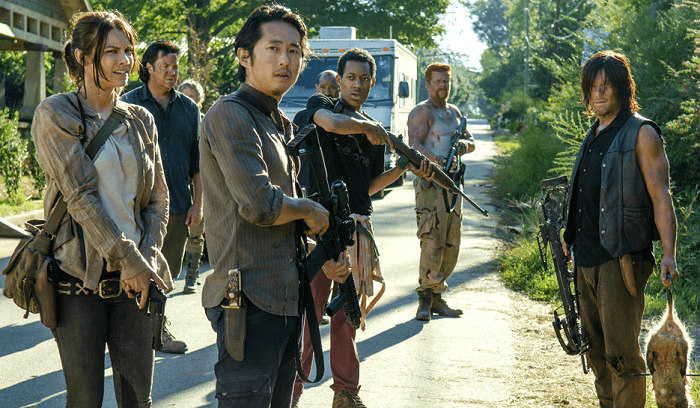 Cue the next glimmer of hope and salvation for the group in AMC’s The Walking Dead. It’s already apparent that there’s going to be some differences between our favorite survivors and the locals of Alexandria. Daryl does what Daryl does and kills some form of wildlife for “dinner” as a sign of good grace, much to the disgust of a hesitant local. Before entering Alexandria, Sasha delivers a headshot to a walker outside of the gate, further showing the value of their arrival. Rick has a sitdown with the head honcho of Alexandria, a woman by the name of Deanna Monroe, a former congresswoman from Ohio. Deanna precedes to introduce herself and explain how this Virginian safe-haven came to be. Realizing that she hasn’t left the safety of her walls since the beginning of, “all of this,” Rick takes it upon himself to give Deanna a crash course of what life is like on the outside. Rick is then offered an opportunity to help the locals of Alexandria survive because Deanna feels that she can trust him. The group turns in all of their weapons, with not as much of a fight as expected, even after how things turned out the last time they did. *cough* Terminus *cough*. Aaron escorts Rick and Carl to their future home. It has running water, a full kitchen and a razor for Rick to shave off his neanderthal-inspired beard he’s been sporting for a while now. Rick is offered a haircut as a housewarming gift from Jessie, a friendly neighbor with kids of her own. While checking out his new spot, Carl hears mysterious footsteps coming from upstairs. He pulls out a kitchen knife and kicks open the door to find what appears to be a kid’s secret clubhouse.Later on, the group elects to stay in the same house the first night to play it safe. Michonne compliments Rick on the fresh shave (shoutout to the #Richonne shippers). Deanna stops by and lets the group know that she’s looking for jobs for members of the group. The “audition for membership” that Aaron mentioned in the previous episode hasn’t been referenced yet, which is concerning.

Meanwhile, Daryl’s ostracizing himself from the group due to his own suspicions. While reminiscing on better days, Rick loses sight of the group and is reminded of the the world they’re living in. Luckily, Carl and Judith were off getting to know some of the other kids. Carl, who now has more battle experience than a Vietnam vet, feels that the locals are weak and is afraid that, if they stay, they’ll come to the same end result. While on a walk, Rick meets Jessie’s husband, who’s smoking a cigarette, hidden by the darkness of his porch which doesn’t help Rick rest easy or feel any safer. That’s not ominous at all. [See: sarcasm]. Rick does a lap around the outer fences of the city and Carl catches a glance at a young girl who climbs over, the same one he saw watching their entry from an abandoned house just outside of the city. After being startled by a walker, Rick goes back for the gun he left behind, only to find out it’s gone. He’s joined by Carl to fight off a handful of walkers that trailed them. Not presenting much of a struggle, it appears that the father-son pair are making this more of a sporting exercise, to remain sharp.

Glenn, Tara and Noah go out with a couple of locals for a run. They’re told that the group recently lost four of its members to a walker attack and, as retribution, found the walker that did it and strung it up from a tree. After realizing that it’s recently gotten loose, they draw the walker back and fail to gain control of it. Glenn gets fed up with this backwards operation and kills it with a stab to the skull. On the way back to the camp, the locals express their frustration and challenge Glenn. Showing his superiority in the survival department, Glenn easily knocks Aiden, one of the locals, to the ground and almost starts a brawl. Deanna steps in and makes a declaration that Rick’s group is welcome and equal to everyone else before appointing Rick and Michonne as the town’s constables. She then thanks Glenn for knocking Aidan on his ass, which was probably a long time coming.

Rick then decides that it’s a good time for the group to start letting their guard down and living in their own, separate homes. After Carol expresses concern that this could make them weak. Rick then reminds them of their strength and says, that if it comes down to it, they’ll take over Alexandria if need be.