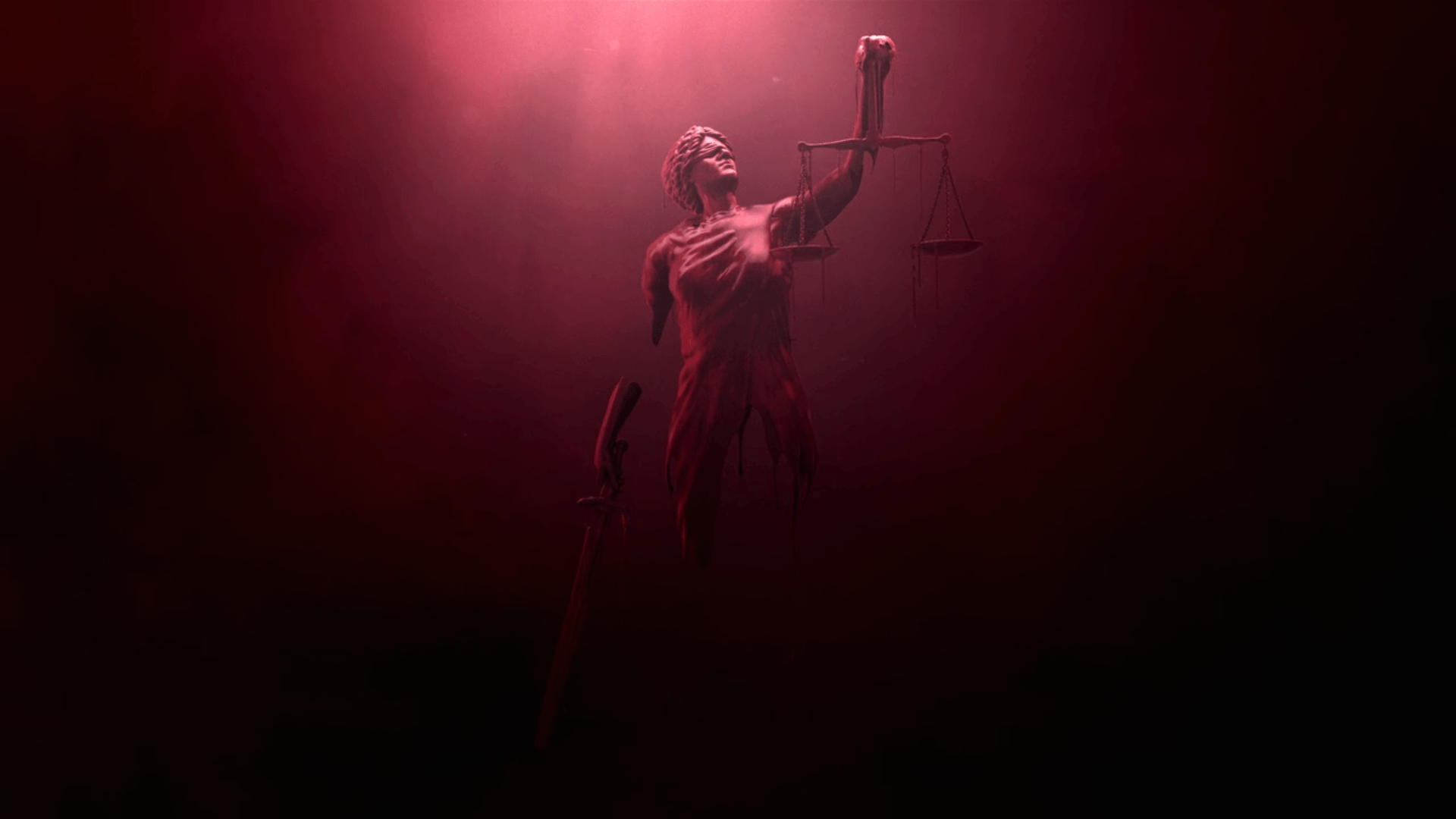 Daredevil season 2 hit Netflix on Friday, March 18 and I was hype! Season 1 was the show I didn’t know I was missing until I had finished it all in a week. It introduced a smaller super hero setting, where no one is saving the world. Where, in fact, the world is really getting worse every day, but there are people holding back evil with their own will and the gifts they’ve got. What’s a better inspirational hero than that?

In the end, these ten great scenes aside, Season 2 has left me more lukewarm than Season 1.
I adore Matt Murdock — Charlie Cox gives him a charming head tilt when he’s flirting that would totally slay me in real life, combined with the occasional rage of his alter-ego that feels very fitting. I continue to be terrified of Wilson Fisk. Like check under the bed, leave the light on, lock all the doors twice terrified. Like Donald Trump has become President of the United States terrified. And adding in Frank Castle this season felt like a perfect balancing point. There is right, there is wrong, and there are all the questions you ask yourself when you’re somewhere in between. The success of these characters didn’t surprise me – they were the stars of the show, I had tuned in to watch them do their do and they (mostly) served purposes well.

The characters that did surprise me were the women of Daredevil. Each actress turn in nuanced, non-stereotyped, complicated performances that lit up the darkness. Each female character became something more than just a paper *character,* moving from stereotype to reality in ways that draw me further into the mythos. Matt Murdock isn’t the only hero in this story. In Season 2, the women characters bring their own nobility, style, and ass-kickery to the small screen.

Karen Page is not my type — skinny, blonde, reliably “I’m from a small town in the big city, but I’m spunky!” Ugh. Plus I feel like the sexual tension between she and Matt is about as interesting as a Twinkie – it is sweet but utterly flavorless and when you’re done you have to wonder what the hell you just did and why. But when, back in Season 1, Ep 11, Karen looked henchman Wesley in the face, listened to him threaten her and the people she cared about, and without hesitation SHOT HIM IN THE FUCKING CHEST… I put Karen on my team.

[divider type=”space_thin”]
Here in Season 2, her growth continues. She follows her own interest in the Frank Castle case, even as she gets involved with Murdock only to realize that whoa, he’s not the man she thinks he is. As Nelson and Murdock proves unable to provide her with the reach and justice she’s looking for, she moves on up to the New York Bulletin, taking over Ben Urich’s old office, which has a nice narrative closure aspect to it. Even as she’s playing our spunky new reporter, she isn’t stupid. She has a gun and knows how to use it; she accepts police protection when she knows she’s in over her head; she regularly tells Murdock to stop playing Boy Scout in her name. She is not going to be the precious White woman that he capes in the name of. She’s neither invincible nor constantly being saved. While her closing monologue, picking up from Ben’s final article to wax poetic on the everyday heroism of New Yorkers, is corny, it has her own truth in it. Look at yourself in the mirror and be a hero. That’s it. Now to find out exactly what happened in upstate Maine that made Karen…Karen.

Elektra Natchios: I don’t even care that she’s the Black Sky. Whatever that means.

Elektra starts out occupying another one of those White women stereotypes: rich girl who gets her kicks off of odd, dangerous, illegal things. The character deepens from there, however. There’s something beyond rebellion in her behavior. A certain (terrifying) joy. Elektra does what she wants, not to impress or scare, not to win men’s attention or anything else. Elektra is good at killing people. Her unapologetic approach to her skill set is refreshingly guilt free, even if it isn’t something I aspire to (most days). Further, her arc illustrates what it is about Matt Murdock that makes him an actual hero: he believes in people. In her words, he has a light inside of him that she didn’t snuff out. And his faith in her (or his faith in Foggy as a lawyer, his faith in the justice system in the face of all facts to the contrary, the list goes on) is what enables her to face “her destiny” and just do her thing: flirt with sexy French assassins while waiting for private planes and then kill them with a one-two to the torso.

Now, her motivation gets real weak in the last two episodes, I admit that. To keep it 100, if I had a cult of fanatical ninjas ready to kneel before me and crown me as the harbinger of the end of the world, I’m not going to promise you I’d turn them down. At least I’d *think* about it for a bit. In any case I’m glad they killed her (sort of) in the last episode so as to spare us all the awkward “let’s run away together” thing she and Daredevil were half-way planning. Because really, nothing would suck the joy of being a globe-trotting assassin out of me like having to take a dude with a bad haircut and a guilt complex with me. Ah, the bitter DA! The Ice Queen steps forward, the powerful woman who has clawed her way to the top and gives no shits for no one. In other words, the woman doing that WORK that we wouldn’t even think about if she were a man. This is actually my favorite stereotypical woman, as she always has me torn:

This DA…Do I love her? Do I hate her? Do I want to be her? This is too many feels! #Daredevil #MurdaMurdock

This was the woman I wanted to be when I grew up. But then I decided to pursue art and here I am. *shrug* Enough about me. The thing about Reyes is that she gives as good as she receives and has Nelson and Murdock on the defensive just from walking in with her high-heels shoes. Until the (fake) Punisher threatens her family and she melts right before your eyes. Yes, she’s made mistakes. Yes, she’s ruined some lives. But she did her best and things have gotten out of control. What makes this notable is that, while she’s emotional, she’s not a blubbery begging mess. She’s genuine and she asks for help when she needs it. She was building to be a great character, but then she got that hot lead shower through the wall and all her possibilities were gone. Bye bye Ice Queen with a heart of gold. Carrie-Anne Moss’ Jeri Hogarth will just have to keep holding this one down. 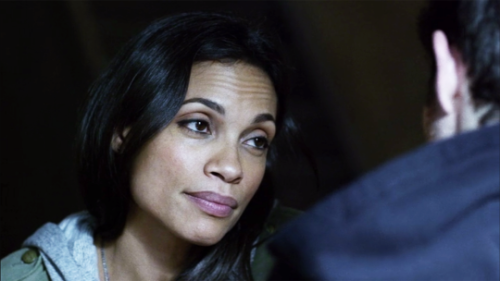 The Night Nurse is a standing character in the Marvel Comics universe. She’s had many incarnations. Claire Temple, in particular, has been associated (by which I mean been naked with) Luke Cage in the comics. Here in Daredevil Netflix style, she’s Matt’s not-a-girlfriend. Not a girlfriend mostly because she’s smart enough to know not to get the crazy on you, no matter how cute that head tilt is. In all of her interactions, Claire borders on being the Sassy Black Friend – she dispenses a brutal honesty about Murdock and his motivations that we all know but won’t say aloud. But she never crosses over into stereotype. She doesn’t talk in folksy metaphors, never refers to Jesus in his magical incarnations, and continually takes no shit from anyone, including the administration of Metro General.

As much as I appreciate her martyrdom speech to Murdock on the roof, I thought her interactions with Foggy were more revealing. There she is genuine in her affection for Matt, and her love for the city, but she doesn’t let either of those things cloud her ability to make good decisions for herself and her patients. I am starting to believe that Temple is going to be the pin that all of the Defenders stories spin around. She’s already shown up in Daredevil and Jessica Jones…we know she knows Luke Cage. Could Claire Temple be the actual damsel that must be saved? Not that she’d let anyone save her.

I continue to enjoy and applaud this series, and most of Marvel’s small screen offerings, for the variety of female experience that they showcase. From Jessica Jones to Agent Carter to my personal bae, Agent Melinda May, there’s always a good surprise in these women. Now if only they could bring this kind of thought to their big screen offerings, I would be a happy critic.