If you were to ask me when I knew I wanted to be a writer my answer never be the same. I don’t have any one defining moment; I have multiple.

There was the time my English teacher told me I was a good writer and I was confused because I thought she was referring to my handwriting, and, to this day, I still have trouble reading my own. Maybe I’d tell you about how I was inspired to retell the story of my cousin’s birth when I was eight and that my aunt still has that piece of paper somewhere. But a story that I haven’t shared much ties back to the early days of my nerdy childhood.

Spider-Man is my favorite comic book character for a long list of reasons, including his backstory, villains and mid-fight banter. I even own the DVD for that MTV series that starred Neil Patrick Harris and didn’t make it past one season. This fascination with the wall-crawler started with the Spider-Man series that aired in the ‘90s. It still serves as my base for Spider-Man lore.

Like most young children, I wanted to be like my favorite superhero – even if he didn’t look like me, shoutout to Miles Morales, by the way. I even got some “web shooters” for my birthday one year (a.k.a. crazy string and a Velcro strap) and ruined plenty of walls and ceilings due to an overly active imagination and lack of a distinction between reality and fantasy. I knew that if I were to really be like Spider-Man, I’d have to work at The Daily Bugle under J. Jonah Jameson. To most people, Jonah came off as a loud-mouthed, yellow journalism supporter that was never satisfied. Which I won’t even try and argue with; he’s all of that and more.

But an undeniable fact is that Jameson and The Daily Bugle had enough power to convince an entire city that the same person that saved their lives time and time again was, somehow, the bad guy. I looked forward to having that kind of influence one day.

Marvel’s Daredevil series is universally considered to be one of the best things not on television right now. It successfully captured the spirit of the source material crafted by Frank Miller and many other writers before and after him, while introducing the origins of character to the new Marvel Cinematic Universe.

But, to me, the standout of the series wasn’t Matt Murdock or even Vincent D’Onofrio as Wilson Fisk, albeit both performances were spectacular. As far as I’m concerned, the best character in Daredevil was the late, great Ben Urich.

Urich has been a mainstay in the Marvel universe for years as a supporting character for both Daredevil and Spider-Man. Working as a hard-nosed investigative reporter for The Daily Bugle (which was changed to The New York Bulletin in the Netflix series), he works closely with Peter Parker and often uses Daredevil as a source. Using the investigative journalism skills he developed at New York University and through years of practice, Urich was able to determine the secret identity of Daredevil, but ultimately chose to keep his silence for the better of society. Chances are, he’s figured out Spider-Man’s as well, but is staying true to his values.

In Daredevil, I saw a lot of things in Urich that I either related to, or one day hope to. He was a successful writer that once took down powerful criminal organizations through his words and worked to take care of his family.

One of the most heartfelt moments of the series came when we saw Ben hold a conversation with his wife, who gave him some much needed and appreciated motivation and guidance, just to have a mental lapse and forget the past few minutes happened at all. Ben sat there, loving her all the same, hurt at what he knew the love of his life had to deal with.

We went on to watch Ben shake off the dust that undeniably coats the old school ways of newspapers and transition into the new age of writing in the digital space. Unfortunately, he didn’t live to have a prosperous second career as one of the world’s most noteworthy bloggers. But his departure from the series was no small moment, which further solidified his importance.

In a universe where all of the brightest minds are one bad turn away from becoming supervillains – often due to a deeply rooted inferiority complex – it’s refreshing to see journalists, Urich being my personal favorite, serve as a middle ground between evil genius and the notoriously naïve civilians that can’t figure out that the richest, most damaged man in Gotham City is Batman or that 235 pounds of solid Kryptonian muscle can’t be hidden under a suit and a pair of glasses. In a sense, journalists and reporters are consistently the closest thing to the average reader within the comic book universe.

They’re also great tools for exposition, whether you’re reading an article written by Iris West-Allen as a peek into Barry Allen’s possible future or watching talking heads debate the crime fighting methods used by Batman in The Dark Knight Returns. My favorite part of the classic Batman story is actually the article from The Daily Planet that shows Batman’s old foes licking their wounds and reliving the glory days. 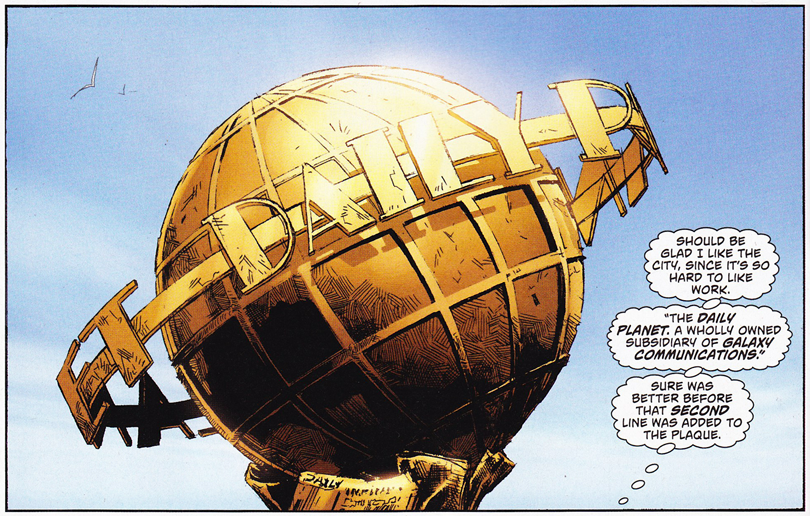 My early interest in writing eventually led me to enrolling in the highly competitive, sink or swim journalism program at the University of Missouri-Columbia. During those long nights when I didn’t leave the newsroom until 10 o’clock or spent hours rewriting the same story, I found myself daydreaming about writing for The Daily Bugle, or at least something close to it.

J. Jonah Jameson was my first look at what an editor could be, so I expected the worst from those I encountered – to my disappointment, my assumption was often proven to be wrong. Peter Parker’s continual rebuffs of his verbal lashings were my first example of how to deal with an editor like JJ. So, as a rule, I’ve never shied away from a rough edit and done my best to keep my chin up and emotions in check throughout.

As a relatively new journalist, writer and/or blogger (still figuring that part out), I wanted to take some time and show appreciation for one of the many sources of my writing interests.