From the jump, it’s very clear that this is a movie about women, for women, by women. Usually that’s a good thing — and then there’s the 2019 Charlie’s Angels. I didn’t think this sequel would amount to anything until Elizabeth Banks was attached to direct. Optimism washed over me. I saw the trailer and hit my TV with the Regina King side eye of disgust. Banks’ acting is usually spot on, and I ride for both the Hunger Games and Pitch Perfect movie series (Don’t get Omar started on PP2), so I had pretty high expectations for Elizabeth Banks. 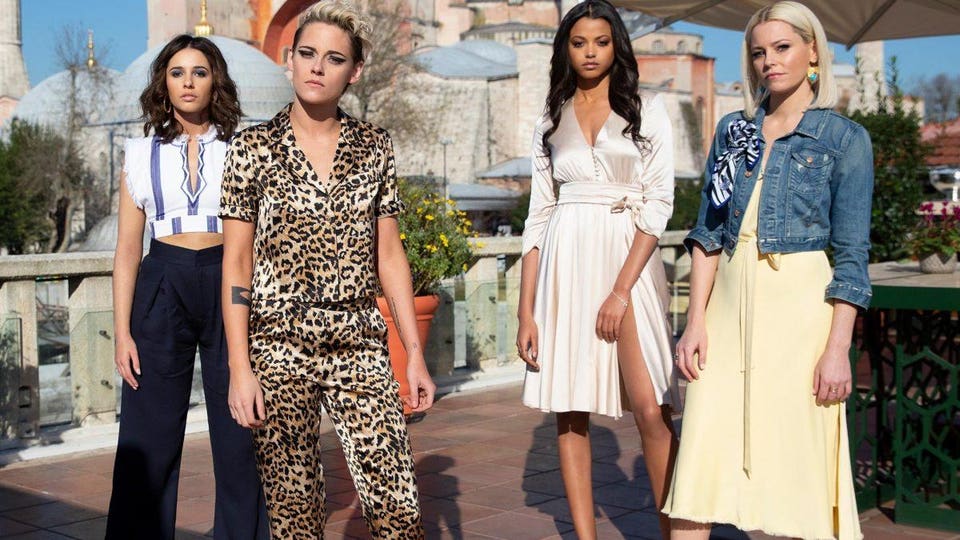 The high school quality montage of girls playing soccer, a woman plowing through white water rapids, and every visual iteration of empowerment sets the assertive tone that the Angels are here to slay in every way. This strong messaging will please plenty of people who see Charlie’s Angels, but the way it repeatedly happens during the 118 mins too long of a run time, was too much for my tastes. It’s as if Banks and her team binge-watched every Fast and the Furious movie for research and thought, “This…but with fists and Angels”. If you go into the theater hoping for a beautiful rendition of woke culture in 2019, temper your expectations because you’re in for many eye roll inducing moments during this ride on the pain train.

Placing Kristen Stewart in this movie was a red tide rotting fish, hot garbage move. How do you take the 2nd most mundane actress in Hollywood (sorry Liv Tyler, you hate to see it) and give her the one seductive, exxxtra and tryna be comedic role out of all three angels? How sway?! Sure she looked good for most of the movie and..and..that’s all I got. Landing 2 jokes in just as many hours and having a handful of respectable scenes is a bottom of the barrel measure of success, and she barely scraped it. All I’m saying is when you find yourself running around like a baboon in a wild bowl cut, you washed fam. Thank Bast for Ella Balinska, who makes many scenes in Charlie’s Angels bearable.

Ella’s Jane Kano balances sex appeal and ass kicking prowess, and she plays well with Stewart’s Sabina Wilson, creating a decent dynamic from time to time. She crushed my favorite parts of the movie, which excelled on different wavelengths. One featured the hot nerd from those high school romcoms on Netflix the last couple years. You know the guy. It’s a cute, flirtatious scene that happened out of nowhere and came full circle by the end of the movie.

A Baddie but a Goodie

My other favorite was a series of scenes between Jane and our villain known simply as The Assassin, played perfectly by the damn-near silent Jonathan Tucker. This man said nary a word and was on a rampage for the entire movie. T-1000 on steroids was not afraid to deck a woman in the face, shoot dudes in the head, or ram a car into the river to get his mark. Unless his mark was named Jane.

I love seeing a badass leading lady of color in movies and television. It’d be nice if this could be the case in every film moving forward, but unless the right balance is struck it just feels like you’re getting beat over the head with poorly written, over the top “anything you can do, I can do better” dialogue just for the sake of it.

Luckily, it’s not all terrible. While most moments in Charlie’s Angels are laughably aggressive, a few scenes showcase impressive insight. This movie does a decent job of finding time to sound off on the various types of toxic workplaces that are still systemically and forcefully holding women back 200 years after the Women’s Suffrage Movement. Naomi Scott’s Elena is the one “normal” person in this entire movie, so she serves as the vehicle that reminds us that more often than not, men ain’t shit. After basically creating the entire piece of technology that the movie is centered around, she wants to warn her silver spoon, man-baby of an investor CEO that it’s not ready to go to market. Leave it to her very stale white bread ass boss to place his crusty hand on top of hers and tell her that she’s too “smart” to keep pushing this issue and silences her. Then we have the smaller, yet more disturbing instance of the head security guard running from his camera room the moment she walks into the building so he can do his Crash worthy invasive metal detecting wand body check. THEN has the audacity to tell her to smile more?! I cringed.

There will be some people who leave the movie feeling a rush of vigor and determination, and I encourage all of that. Let Charlie’s Angels resonate with you. As the woman behind me on the escalator put it after we left the theater, “Didn’t that make you want to do a boxing class?” If that’s what they were going for, then you’ll probably enjoy the ridiculousness. But like Hobbs & Shaw and the rest of that franchise, we all know what we’re getting when we sit down for one of these movies; we want to turn our brains off and enjoy some mindless entertainment. Those looking for just that, Charlie’s Angels is for you.