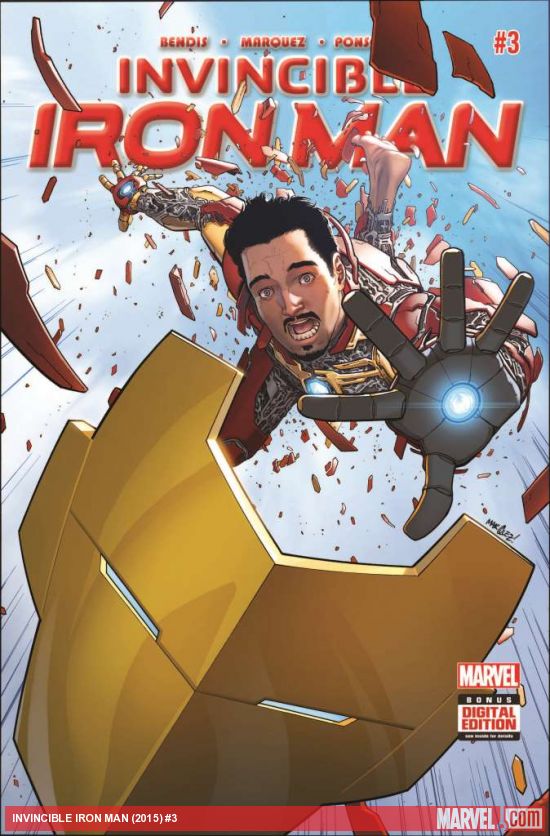 This month, Brian Michael Bendis finally says a long delayed farewell to his run on the X-Men books. However, last month marked the beginning of his time writing Invincible Iron Man, a character he’s written in one book or another for many years now, at least since his decade long tenure working on Avengers. So far, Bendis has managed to ambush us with the “All New All Different” in this era of the Armored Avengers exploits, not really making the differences clear until the second issue. Now, things turn up a little bit more.

Issue #3 sees the Doctor Doom storyline take a backseat as Tony Stark finds himself up to his servos in trouble with his psychotic, magic seeking ex, Madame Masque. As intriguing as the concept of Victor Von Doom’s attempt at reform has been thus far, I have to admit that Masque has never been as insane and entertaining as when Bendis was writing her over the years (possibly tying with Matt Fraction’s foil for Kate Bishop in Hawkeye). The very idea of one of Iron Man’s worst villains being an ex-girlfriend he didn’t treat very well when he was on the sauce has always been so fitting before. But now, the fact that she’s in control of magic, something has forever confounded such a technocentric mind as his is definitely a subtly awesome approach to the whole “All New All Different” theme. 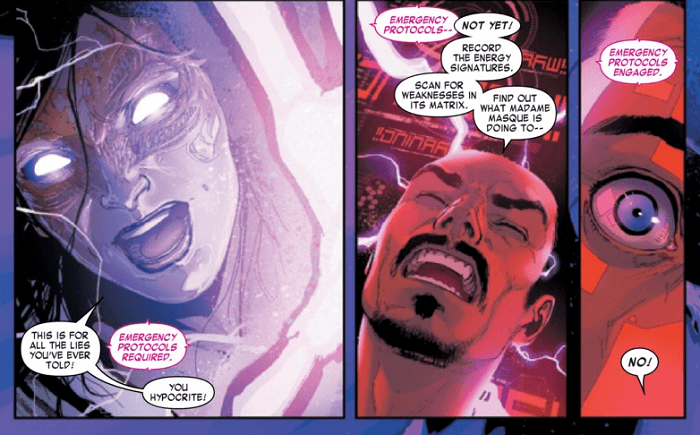 It’s like that thirst trap movie where Michael Ealy is a stalker….except for the fact that it’s actually nothing even close to that. Also, we get a wonderful superhero cameo that I dare not give away because its payoff is unbearably hilarious and you deserve the same unexpected chuckle that I got out of it. Visually, David Marquez is stealing the show. The facial expressions and body language are all on point. I couldn’t imagine anyone else being such a perfect choice to depict the fluid versatility of the new armor. The showdown with Madame Masque was a gorgeous sight to behold.

Bottom Line: This book has been picking up speed exponentially with each issue. Although this issue doesn’t have quite the same sense of fun as #2, the intensity and wit are both still firmly in place.

9 Violated Restraining Orders out of 10