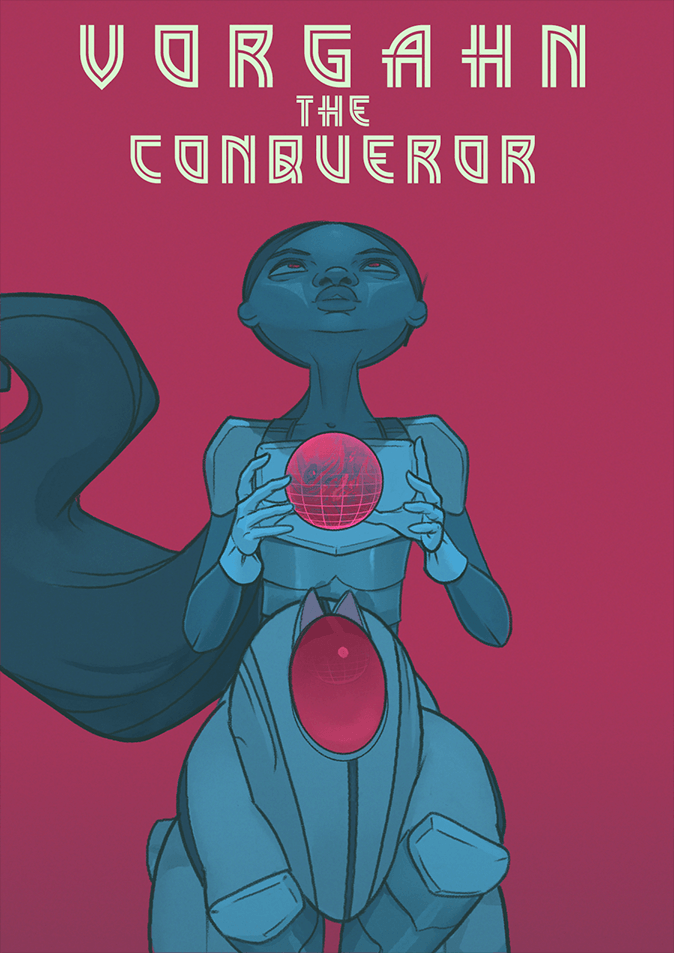 In her words: “Vorgahn the Conqueror,” she’s the lovely sci-fi lady with the blue hair and orange jumpsuit. Vorgahn is one of many descendants of the few countries that made it off earth and, with some intergalactic help, colonized current a homeworld Goldilocks planet: G3, two thousand years ago. Working as a Government ‘Auditor’ she’s sent off to unexplored planets to evaluate their population and decide whether or not they meet the criteria to be invited to join the flourishing Planetary Fellowship that G3 belongs to.

She’s under-funded and over-worked, her ship is a floating death trap, her AI assistant Z’iebn is held together with hope and duct tape, and even though she hates her job she just isn’t sure what else she should be doing. There’s a lot of action and space exploration, but the biggest theme is how Vorgahn handles her dissatisfaction with where she’s at in life, her long periods of isolation, and most importantly the tough decisions she has to make knowing for many planets she’s their desperate population’s last hope for salvation.

We caught up with her after the webcomic officially launched and we have a exclusive look! 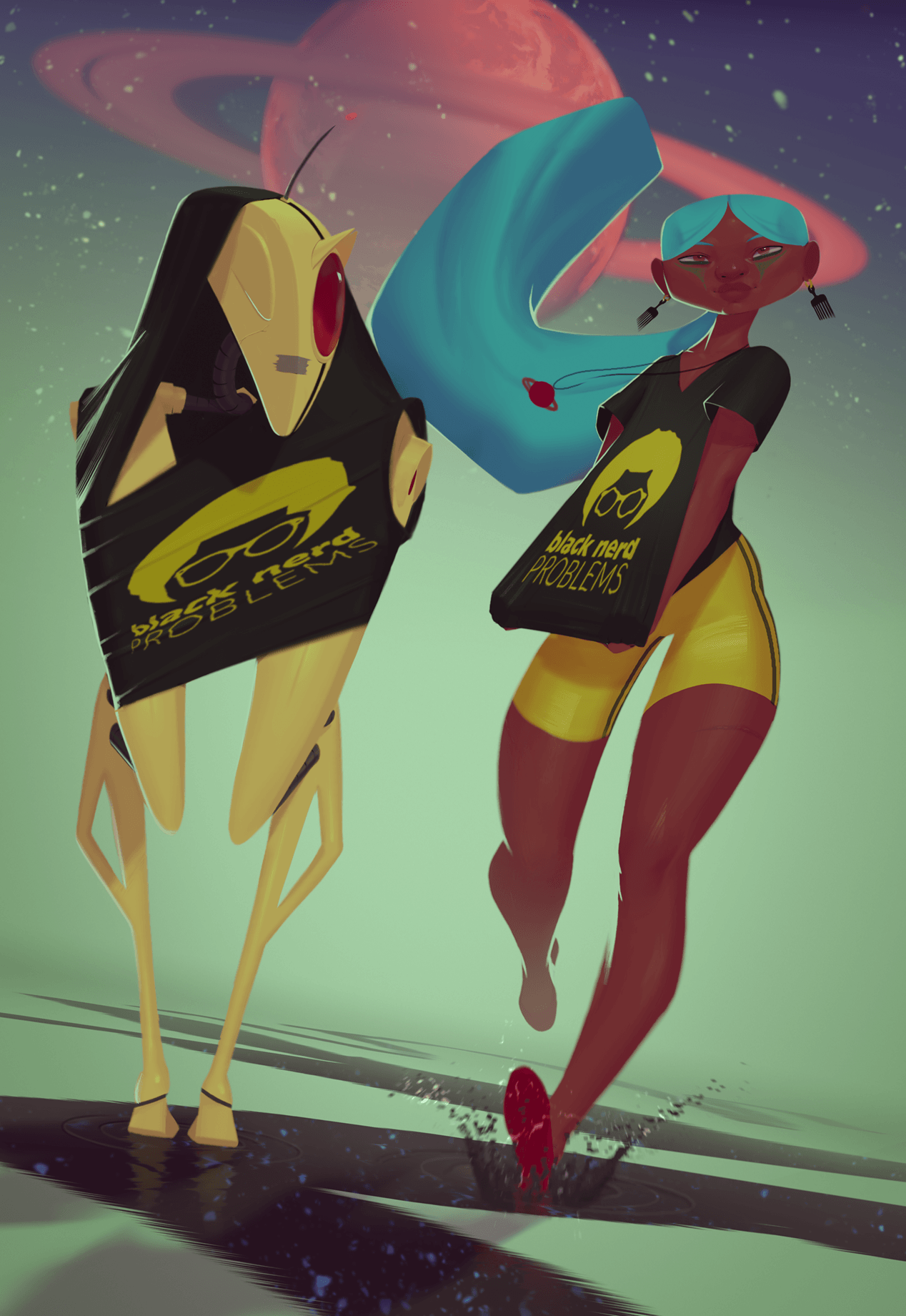 BNP: Living, navigating, and exploring outer space sounds awesome but I wonder how technology would make things easier for us when space travel and colonization is an actual thing. I gotta ask as someone who faithfully wears her satin bonnet (I got scarves too) to bed: what exactly is V wearing on her head to help keep her hair laid?! 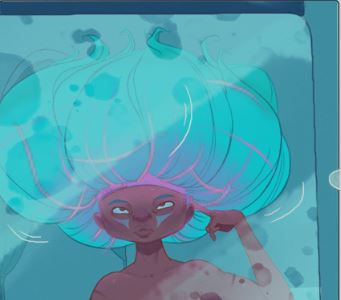 Deni: The Miku Kiku bonnet! I thought it’d be neat if in 1000 years hair technology finally caught up and invented a bonnet that could suspend your ‘do in space-time. Now literally the only time you ever need to wash your hair is when you want to change it up. We never really see everyday kind of items all teched out in a lot of sci-fi I noticed! In Mass Effect, Battlestar Galactica, the Stargate Universe etc. everything kinda looks like Apple and Ikea had a baby. Everyone’s got holograms and iPads and laser guns but like are tampons gonna be a thing in the future? Is mouthwash still around? I just refuse to believe things like we can completely master the mass effect cores and bend space and time, and yet the height of oral hygeine is still running bristles back and forth over your teeth. Either every kid at 13 is getting Adamantium veneers or there’s some kind of hyper re-enameler gel we’re all chewing but in 1000 years there’s just no way toothbrushes are still a thing. Its 3015, damnit! It’s time!

BNP: Set in outer space, I would reckon that there many dangers to be aware of: hostile aliens, faulty spaceship (WELL she actually has one of those! Ha!), running out of oxygen, etc. But for Vorgahn, our main character, her biggest problems are mostly internal—dissatisfaction, boredom, and mostly heavily, as you put it, “the tough decisions she has to make knowing for many planets she’s their desperate population’s last hope for salvation.” That’s heavy. In a sense, she is a character that many people can relate to. Being tasked with big responsibilities and not being properly equipped and feeling some kind of way about it as you do your jobs. As a millennial I feel I can relate to her. Did you model Vorgahn after someone? Or perhaps are there elements of different people in her, maybe even yourself?

Deni: I’m not sure if Vorgahn’s modeled after any one person but I definitely feel she’s a reflection of our generation in a world that bares very little semblance to ours. Vorgahn’s history is very different, she and everyone on G3 are descendants of the 7,000 scientists that basically did a ‘sneaky’ mass exodus off Earth. Because of their environment and influences a culture of cooperation, curiosity, solidarity, and technology blossomed. Unfortunately problems also arose from that.

One being that people on G3 retire at 40 to make way for the newest generation to keep development relevant and innovative. Vorgahn’s almost in her mid-30s and has been at the same job since she was out of high school, leaving her between the rock and hard place of not being young enough to be competitive in a new career and being too old to be considered relevant enough for a promotion to a leadership position. I think most millennials can relate to that sense of being prepped and groomed for some kind of promised land only to be thrust out into an apocalypse, having to come up with some random coping skills on the fly. 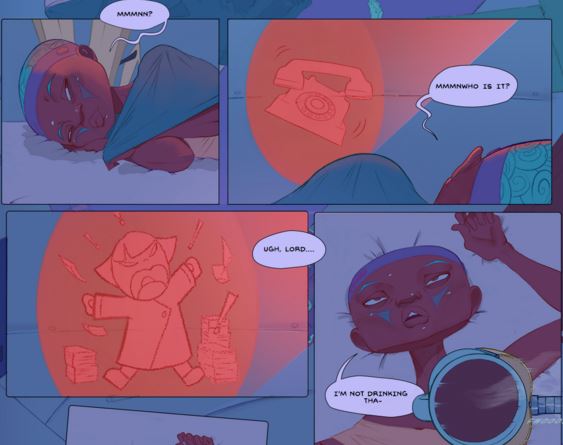 BNP: I want to backtrack a bit, I’m still a bit stunned by the title: Vorgahn the Conqueror. It just has a nice ring to it. It sounds confident. On first hearing it, I instantly thought, “Whoa. That person is a big deal.” Without knowing the gender of the main character of your webcomic, I’m sure maybe a few folks naturally assume that the main character was male. (Possibly due to society and history taking a liking to adding to such titles like “Conqueror” and more relevant to us, “President,” to be by default for men.) When you chose the title, was there anything you wished to convey to readers about Vorgahn as a person? As a woman?

Deni: I think the most powerful thing about Vorgahn is her ability to be an absolute mountain when she must be, and inconsolably weak and vulnerable when she can’t not be. The title itself actually comes from many native peoples’ initial reaction to Vorgahn. They usually mistake her for some sort of Conquistador set on conquering their planet, LOL. Her mother named her after a Theoretical Alien Anatomy professor she had a bit of a crush on in Uni. I initially chose the title because it was the first thing a native alien calls her before she even gets a chance to introduce herself in the first chapter.

Though, the situation with Vorgahn is she is this one person existing in the middle of space while her planet continues to grow and move on without her, often making her feel small, inconsequential, unalterably lonely. However Vorgahn is a big deal, she’s a massive deal. To her own planet, who has thousands of government auditors, her experiences and adventures seem very ordinary. To certain planets, however, that she’s assigned to evaluate she could literally be the difference between a cultural, technological age of enlightenment or the inevitable extinction of the dominant species barely hanging on.

I’m very excited to see where Vorgahn’s adventures take her and very curious to see what she ends up accomplishing professional and personally…will she make her deadlines? Will she be at the mercy of some new alien race upon setting foot on their planet? Will that one door in the ship ever be serviced correctly and work the way its supposed to? Be sure to check out the webcomic here.  Recommended for ages 12+ for very slight nudity and coarse language.