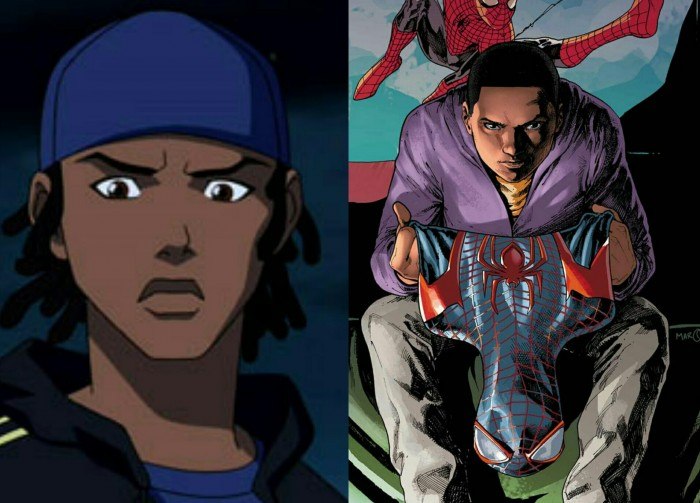 *Raquel Ervin (Rocket) is speeding through space heading towards Wakanda. Tonight, after months of back and forth on Twitter, Virgil Hawkins (Static) and Miles Morales (Spider-Man) are doing a roast battle where all the proceeds will go to charity.*

Rocket: Ohmygodohmygodohmygod–come on–come oooooooon YES!
*Rocket lands in front of the Wakanda Barbershop. She opens the door to see a flood of people. She makes her way through the crowd, stopping once she finds Anita Fite (Empress) *

Rocket: Ugh, how much did I miss?

Anita: They’ve already been through the first 2 rounds.

Anita: They both took a round, but Virgil is saving all that savage for the third round. He’s handing him the torch, but still gonna come for Miles’ kicks, web shooters, and hair line.

Rocket: My Heroooooo, yes! I love that this is Miles’ official initiation. He’s really done a lot of work for the Spider-Family at Marvel and dealt with a lot of hate too. Almost as much as Sam got for takin the Cap title.

Anita: You goin be Spider-Man, then you best be prepared for the hate.

*Cut away to Duke Thomas & Eli Bradley sitting with microphones and cameras around them. They’ve been color commentating the battle all night.*

Duke: Never in my life, except for last week when Monica was hooking off on Rhodey, have I seen such a display of no-chill. Static is still at the top of his roasting game.

Eli: Bruh, Miles barely made it out for a win in round 2. That boy better get the web shooters shooting cause he can’t take another round like the first one.

Duke: Hey, Miles wanted this initiation man. This is how we welcome new blood round these parts. Remember when John Stewart and Luke Cage battled?!

Eli: How did they shake hands after that shit, man? What did John say about Luke’s yellow shirt again? *throws his head back with hands over his face* ahhh– “I’ve put up too much of a fight for-

Both: This broke ass Dolomite!”

Eli: Yuuuup! Yuuuup! That shit was so reckless and the reason we still carry this tradition on, man. It’s just so much fun when you go back through the history books and see how everyone held up when they were sworn in.

Duke: Looks, like we’re heading back to our moderator, Misty Knight. I think we’re ready to jump into this last round. If you’re watching at home or online, remember this is live from The Wakanda Barbershop. Wakanda Barbershop, the only fade you’ll catch here is a caesar.

*Misty Knight calls Static and Miles to the center of the audience as everyone else backs up and forms a circle around the three of them.*

Misty: Last round boys. No bars barred, get it all out here. Static it’s on you. Miles, good luck.

Little Miles, where my royalties? You a clone of me/
Young Black kid turned superhero by science forced to face the system?/
Sound familiar? You did it last, I did it better, you a remix song of me/
You & the 100 Spider-Mans before you call that flattery — but me & the rest of DC just call that PLAGIARISM/

I rep Dakota City proud, you think it’s country? Guess you bout to lose to some hicks/
Better learn what time it is Miles, you always gonna be under me/
Now that’s what I call Views From The 6/

The darker Peter Parker got on and got a white girl,/
Got his card pulled by Spider-Woman, then tried to fight girl,/

Gwen Stac’ a better Spider-Man than YOU, and ya label rather write girl,/
Everybody back up, we all know Miles ain’t got the stomach for real conflict, lil homey might ‘earl/

I got bodies on my fitted, Dark Side Club alum/
Bodying Holocaust was work, I’ll squash this baby black spider for fun/ 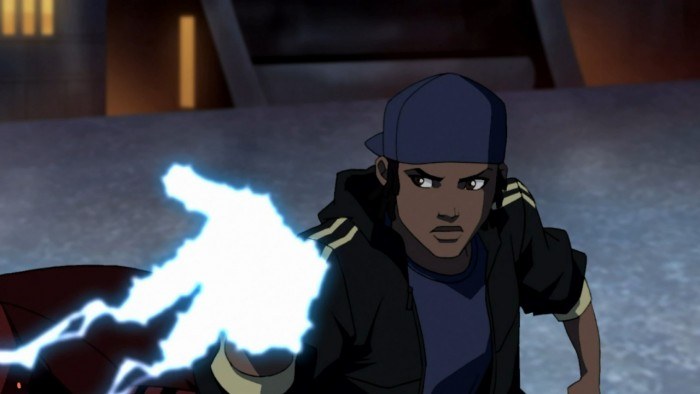 Duke: Why’d he take it to the pops doooooooe.
Eli: That went no chill to “I said god damn” real quiiiiick.
Duke: There are very few in the business acknowledged to be better than Static at this game. Now let’s see what Miles is really made of…

Misty: Alright. Hold it down, hold it down—Last Round. Miles Morales it’s on you kid. Let’s go.

The 616 God. Goin’ Darryl Dawkins on Virgil Hawkins/
You from DC, you know alllllllll about parallels and universes, don’t you?/
Since ya stories are just… ehhh… straight- so how YOU talking?/
Bitcoins will make’m Paid in Full. And I’m Rico with the web-shooter/
Still the man when I come home to New York/

You from where? DAKOTA city? Whatchu out there fighting? Hedge Gouda?/
Sharp Cheddar? Views from the 616 here get deeper than the Ocean Blue/
And you reppin’ a Midwest don’t nobody know, so I’m fiending to put the roast on you,/
Guess I’m West (Wes) Krave in (Kraven) your mind, Kruger Morales turn dream to nightmare/

How you gon’ duff me without McDuffie, G?/
You went from Milestone to file gone/
To Justice League, don’t eeen pick up like “just leave it at the dial tone”/

I’m New Avenger, you just Teen Titan/
They freshened my squad but canceled your show- TWICE -/
I mean why you ‘eeen fighting?/

Had a talk with Sam the other day, said “I look around and there ain’t any of us”/
I told him “I’d agree but, thanks to glorified mild thunderstorms like Virgil…./
Nah….there’s PLENTY of us” *6-1-6 is being chanted by the crowd. Miles turns to the crowd surprised by the reaction and is caught off guard by Static tackling him while laughing.*

Misty: And that’s all she wrote, folks. Take it to the Twitters, comments, to decide your winner. Let’s give it up for Static returning once again for this tradition and to new young gun, MIIIIILES!

Static: *Pulling Miles’ head into his chest* Seee?! Seeeee?! Told you it’d be easy, how do you feel?

Miles: I know I’m breathing but it feels like I’m not. That was the scariest thing I’ve ever had to do.

Static: Pshhhh, you think that was bad? Come on, I’ll tell you bout when Cyborg was goin’ against Hardware, and Curtis called Vic a “WiFi hot spot.”