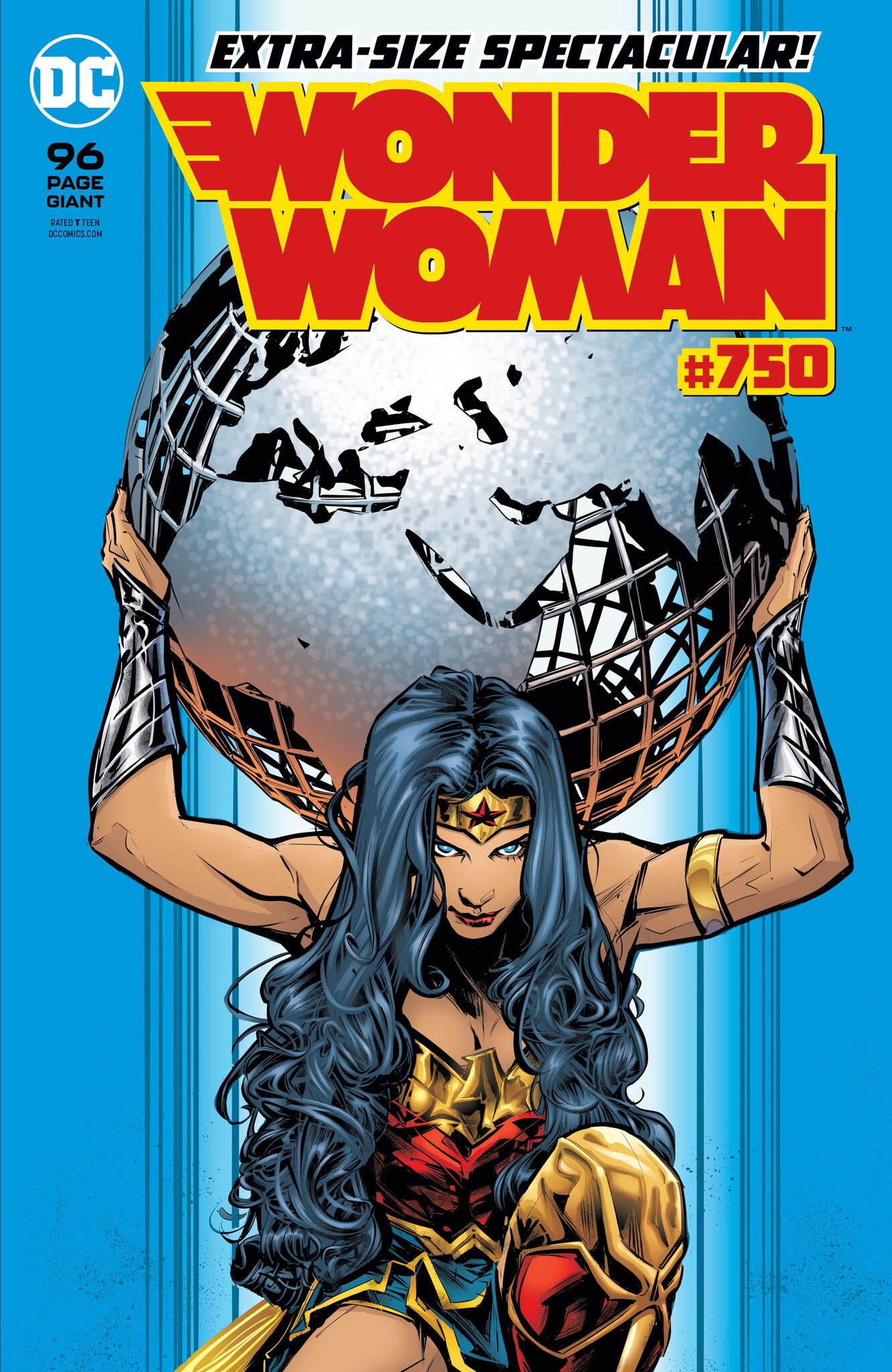 Wonder Woman is the last of the DC Trinity to reach her milestone issue count, but it certainly has received the same fanfare as Detective Comics #1000 and Action Comics #1000. And there is perhaps no better time for this particular comic considering how it’s heralding the new year that is 2020 and marking a beginning for Diana, Princess of Themyscria.

Wonder Woman #750 opens immediately with the conclusion of “The Wild Hunt” arc found in Wonder Woman #82 and #83, and in many ways poetically represents the new world order with the return to legacy numbering. Orlando and Merino do not disappoint with the epic conclusion of the arc, staging the future of the character and setting up the milestone issue.

Cheetah, who has been armed with the Godkiller and other iconic equipment from the Amazonian Armory, has been literally raging against the heavens, attempting to strike down all of the gods in an attempt to free Diana from their influence. All of the rampage has finally drawn both the Silencer and Hera to Boston. The conclusion to “The Wild Hunt” starts with Wonder Woman looking at her friend engaged in combat with her god, and telling Silencer that even after all the turmoil that “Even now, despite all she’s done… I must find the strength to care.” It’s a perfectly iconic piece of dialog that captures Diana’s empathy and aspirations, and Orlando masterfully manages to convey that as powerful as Wonder Woman is, her true strength comes from wanting to reach a peaceful conclusion first and foremost.

Merino’s artwork works in perfect tandem with Orlando’s narrative. Wonder Woman’s body language slowly evolves over each page as she gains more resolve. Her certainty falters for only a moment, before she emerges from the darkness as a beacon of hope, posturing herself defiantly between adversaries, stalwart and powerful as she puts a swift end to the conflict. The panels are truly majestic and complete the comic, creating a curtain of magic and mystique. 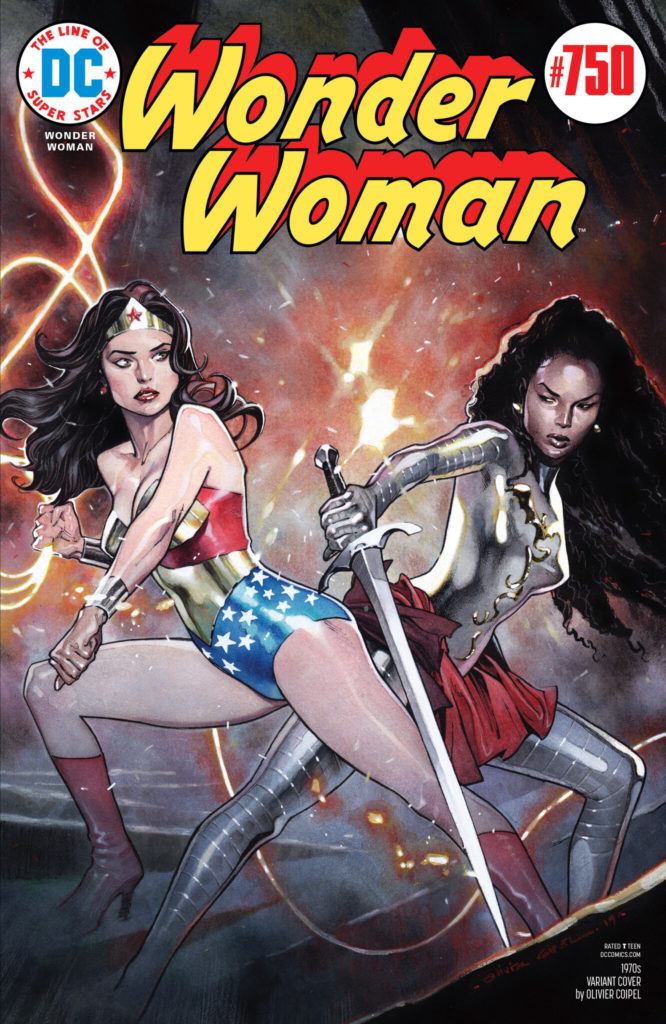 Without going too much into spoilers, it’s safe to say that Orlando has set up Wonder Woman’s next saga beautifully and also the rest of the stories within the giant. The rest of the issue features wonderful one-shots from a variety of writers and beautiful pin-ups. The diversity of the creative teams is evident. There’s a wide range of narrative and art styles — whether it’s the classic interpretation of Simone and Doran in “From Small Things, Mama” to the retro-style from the Bombshells reprisal from Bennett and Braga in “To Me.”

My personal favorites out of the collection are “The Interrogation” from Tamaki and Casagrande and “Always” from Ayala and Nahuelpan. The fact is that each of the stories are strong in their own right and explore the different aspects of Wonder Woman. You’re going to find one at least that resonates with you. The shifts in style and tone truly let you appreciate Wonder Woman in new ways.

That’s always the best part of anthologies like this: it reintroduces you to the character. It inspires you with the perspective of different writers and artists all sharing what they love about the character, how much their existence has impacted them, and it shows. Even if you haven’t been keeping up with Wonder Woman, this is the time to jump back in. It’s a roadmap to where we’ve been and where we’re going, and 2020 is looking like a good year for Diana. 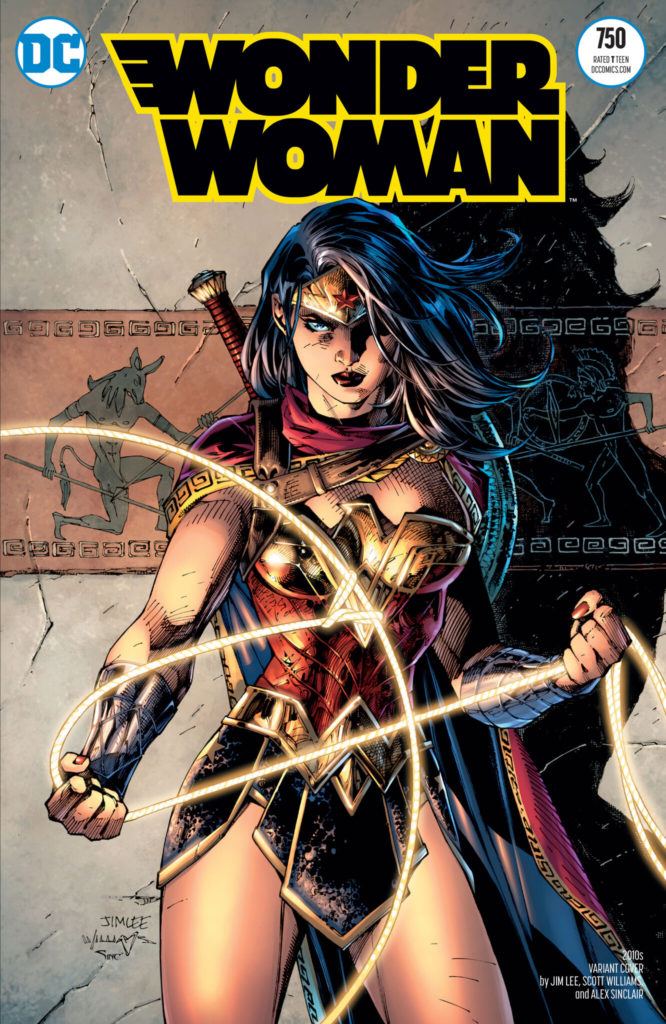