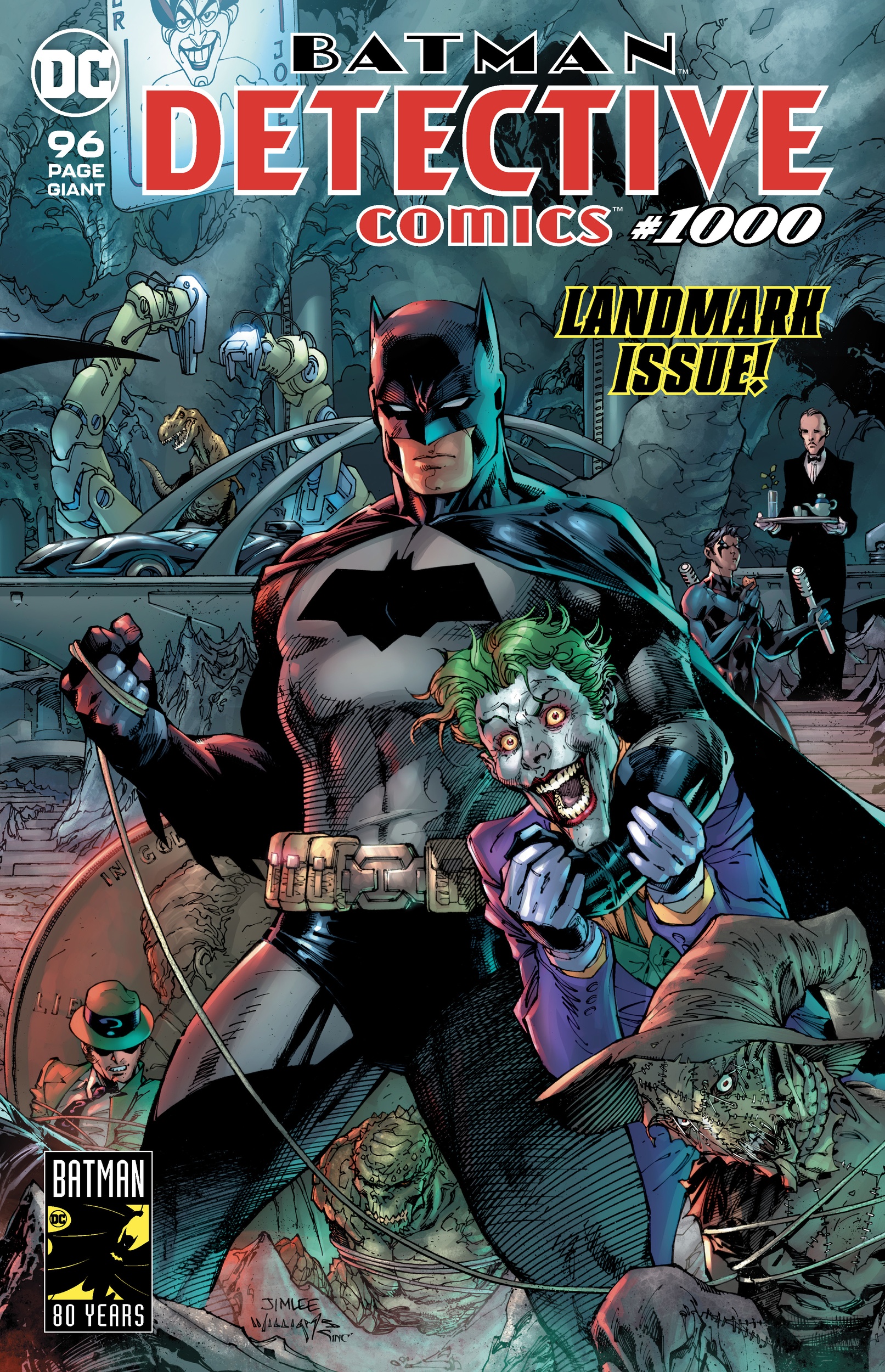 Batman is the second of the World’s Finest to reach his #1000 issue milestone, and it comes at such a poetic time. Batman turns 80 this year, almost to the day and the character has become so incredibly engrained within mainstream media. At any given time, there are at least half a dozen Batman-centric stories. It is very possible that Batman may very well be the most celebrated character of fanfiction. The byproduct of Bob Kane and Bill Finger has had countless movies, animated series and anime, live action series, comics, video games (beat em up and visual novels), and action figures. You name it, Batman has probably been preserved in that media in some way shape or form. Which is why the 96-page giant that is Detective Comics #1000 is so special, because we get to experience a veritable gauntlet of the different aspects of the Batman.

Scott Snyder and Greg Capullo open the anthology with “Batman’s Longest Case,” a brilliant showcase of the more pensive side of the character, a heavy emphasis on the “detective.” Snyder, being one of the best Batman writers pound for pound (according to one Uber driver), continues to bring his A-game as he yanks Batman around the globe, giving Capullo plenty of stellar set pieces and dynamic moments to illustrate. It’s truly a fitting way to open the anthology.

In that same vein, Kevin Smith and Jim Lee revisit the origin story as Smith adds a new wrinkle into a familiar scene. Smith makes excellent use of the Rogue Gallery to elaborate on Bruce’s psychology, a trait that can also be seen in Paul Dini and Dustin Nguyen’s “The Legend of Knute Brody,” as Dini opts to explore one henchman in the form of an oral history that ends up being one of my favorite vignettes out of the entire collection.

Warren Ellis and Becky Cloonan then pivot into the headspace of the Batman in hot pursuit. Ellis does an exceptional job of exploring Batman’s harsh mercy and his clinical approach to taking down bad guys in a stunning visual spectacle of Cloonan’s artwork.

Denny O’Neil and Steve Epting’s “Return to Crime Alley” focuses on a conversation between Batman and Leslie Thompkins and is one of the darker stories in the anthology, although it does more fully flesh out of the Dark Knight. It’s only fitting that it pivots into Christopher Priest and Neal Adams’ “Heretic” which examines Batman’s training period, including a callback to Batman Vol. 1 #43.

Following that is a story from Brian Michael Bendis and Alex Maleev centered on Cobblepot. The Penguin is one of the more prolific of the Rogue Gallery, but the character seems to oscillate on how much of a threat he actually is. Here, Bendis tells a tale of an aged Cobblepot recollecting the past to an equally aged Wayne and every “weyp” punctuating how Batman’s presence constantly haunted the minds of his villains making for a compelling anecdote. 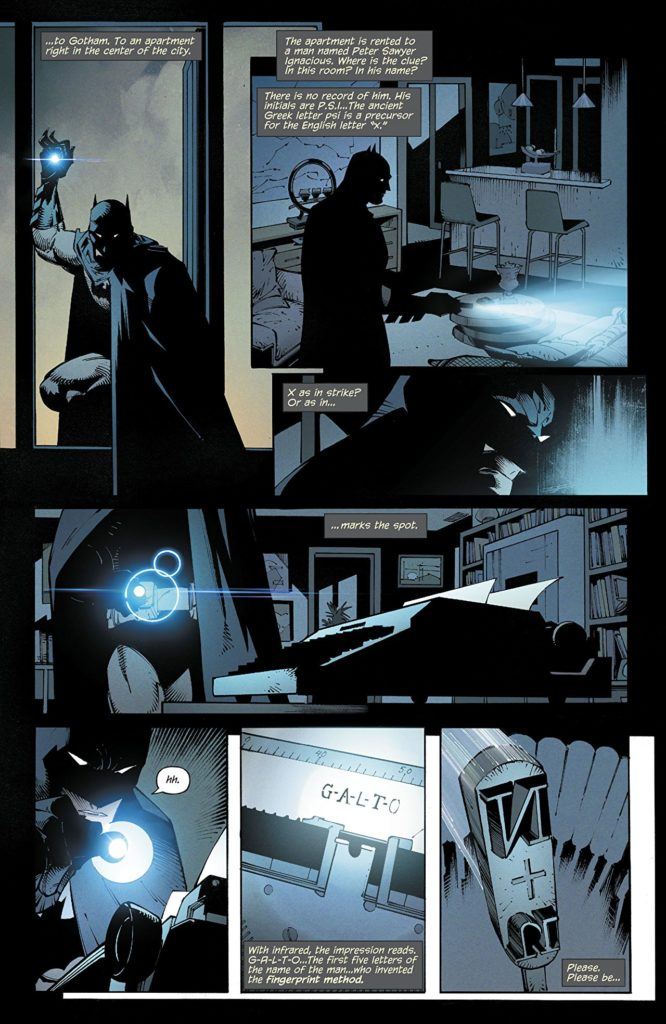 Geoff Johns and Kelley Jones tail the story with their “The Last Crime in Gotham,” in what is the most jarring switch in tone and art, as a future Batfamily tackles one last case, along with Ace, on a very special day. It’s probably the oddest story of the bunch, but Johns does stick the landing.

After that, we see “The Precedent” written by Justice League Dark veterans James Tynion IV and Alvaro Martinez-Bueno. It gives Bruce a chance to have a one-on-one with Alfred and meditate on their father/son dynamic, and how Alfred’s actions have impacted Bruce raising his own children, adoptive or otherwise.

The penultimate story, written by Tom King with art by Tony S. Daniel and Joelle Jones, carries this theme of family for a couple dozen pages, as we are greeted to a dual narrative of Bruce Wayne visiting a graveyard while the extended Batfamily waits on the roof for the Bat. It’s classic King storytelling, honed and focused that dives deeps into the psychology of the character and pokes and prods at what makes them tick. The end result is my favorite story of the anthology, if only because we get to see a proper Batfamily reunion. You got a Dick Grayson Nightwing, Batwoman, Damian, Signal, Jason Todd, Tim Drake, Spoiler, Batgirl, Huntress, Orphan, Catwoman, and Ace all in the same place. And it continues to probe at this singular idea that King has been going on about forever: can Batman be happy and be Batman? A question I look forward to reading in the mainline.

The issue ends in a similar fashion to Action Comics #1000, with the author of the series hinting at what’s to come after the milestone. In this case, we get a glimpse of a proper Arkham Knight. And it’s something you should probably experience.

Much like the last #1000 milestone, the anthology itself is not with fault. However, the sheer monument of the occasion and the wide versatility and story and aesthetic mesh together to pain a pretty goddamn good picture of the Batman and everything the character means. You can’t review something like this. You merely share the good news that is Batman and that the creators have put their heart and soul into a character that in turn means so much to us, the readers. That’s something you can’t really put a number on. 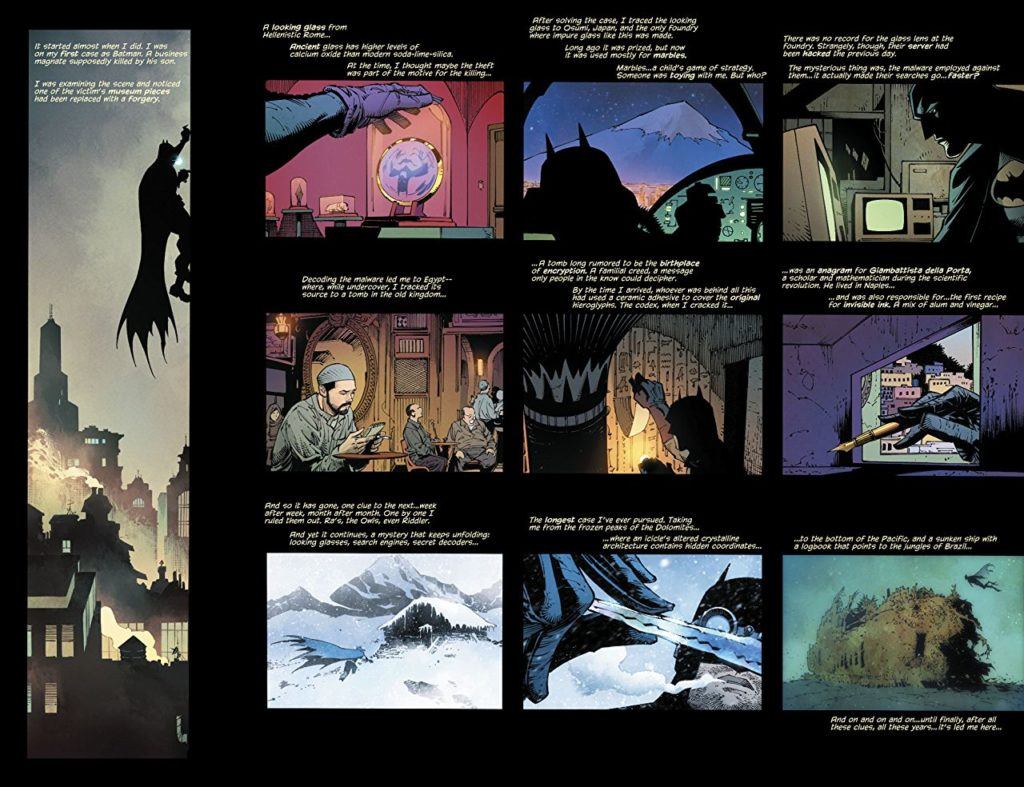