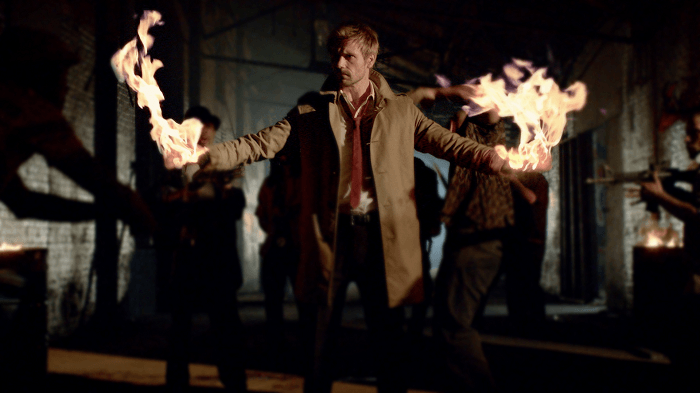 The TV schedule for the Fall of 2014 for those of us that Nerd hard in these David Aja panels, is like when your Aunt Maple sends the double chocolate cake home with you at Thanksgiving because nobody else touched it. At first you are fist pumping till your shoulder sounds like Cable’s, but after you take a full inventory of what lay before you, you’re just left thinking to yourself, “My Lord, what have I gotten myself into?” The schedule is FULL of shows that normally fall under the purview of a site such as BNP and honestly, I don’t know what will get the full service treatment and what will get some fleeting mentions as they reel off their 22 episode runs. But of course, there’s no harm in sharing some thoughts and predictions on what is coming, right? With ridiculous analogies of course. These are just the comic book adapted shows that drop this fall, so lets dive into celluloid’s newest phenomenon / cash crop.

Coming from an admitted Batman-Stan, I’m scared people. Actually, I don’t know what the seven steps of grieving one of your favorite comic universes being turned into Zero City are, but I’ve probably skipped a few and am calmly residing in the “This will be a train wreck and every decent moment will feel like Bane’s monologue when he broke the Bat in The Dark Knight Rises” territory. I have so many questions. Why couldn’t Fox spring for Ben McKenzie to have / grow a mustache as Commissioner Gordon? Why are there so many villains? Ivy Pepper? Why are there so many villains? Just how much ridiculous and sulking Bruce Wayne-ness are we going to have to put up with? Why are there so many villains? I think the idea of a show centered on Commissioner Gordon is a great idea and the early pitch for this show apparently was just that, pre Bruce Wayne or his rogues gallery. But, it’s hard to sit in the shadow of the Washington Monument for any duration of time and not remember that it is in fact the Washington Monument towering over you. So I get it. I just hate it had to be you, Gotham.

I’m unqualified to talk about the continuing quality of AOS because watching damage control in the absence of actual superheroes in a universe built on actual superheroes is not how I like to spend my time. I made it three episodes before I conceded and let my wife watch Murder She Wrote episodes on Netflix. I checked in a little bit after EVERYTHING CHANGED after Winter Soldier (that’s my impression of ABC’s promotional efforts) and I didn’t hate it, but still found the show pretty uninteresting. And that’s being kind. I’m guessing there’s a reason Coulson was under Nick Fury. Still, the show HAS to be better this year. Right? I mean, it has to be? With some Peggy Carter cameos and other people getting added, it can’t be Coulson and the SHIELDETTES again, can it?

Worst Case Scenario: The bulk of Arrow Season One

I just don’t know how this show fails, to be honest. It’s on the CW, so we don’t have any expectation of it challenging Mad Men at the Golden Globes for acting, but it is going to follow the Arrow’s blueprint and that’s been largely successful. Meaning, we’re going to get some cool action, great DC Easter eggs, plenty of crossover with Arrow and a stable full of villains. Speaking of which, Barry Allen, doesn’t have to borrow from anyone’s rogues gallery like his CW co-star *cough* so I expect less throw away villains and characters overall. Not to mention the deliberate and seemingly successful effort in making the cast very diverse and representative of its audience, I’m in week one and will give it a lot more rope than I would some other shows.

#ArrowBack with season 3 bout to jump off and they are FEELING THEMSELVES. Adding another Justice League member to the cast? Check. Bringing on a morally ambiguous badass female character in Katana? Check. Still jackin Batman for beats? Check. These are the staples of a successful Arrow my people. I still think its gonna be really hard to top season two, primarily because Deathstroke was portrayed just about as perfect as he could’ve been, but this show has a ton of momentum, a built in and growing fan base and all the pretty people you can handle. Plus, if Flash is successful like most people anticipate it to be, then Arrow gets credit for spawning that too. Arrow still chillin in the Watchtower until someone teleports them out of it.

Best Case Scenario: The first 8 episodes of season 3 of the Walking Dead

Worst Case Scenario: The last 8 episodes of season 3 of the Walking Dead

I’ve wrote before about how The Walking Dead is the most average show on TV but that’s because it’s highs are super high and its lows are anything with the Governor after he lost his eye. I admit that this show CAN be great, but we’ve also seen its ceiling. Anyone who still thinks it has a “better than what we’ve been watching for the last 3 years” season in it been hitting up that Mirakuru without any of the good side effects. My guess, we get another, very good first half season with the second half looking like a gymnast on the uneven bars that forgets where they are at halfway through a dismount. It doesn’t matter how many Wire alums this show adds, it still has to depend upon Rick being consistent as a lead character and the hope that there is an endgame. Imagine Game of Thrones if all they ever did was wander around the woods and gave monologues. That show would suck….Just sayin.

Of all the new superhero tv shows, I actually think that Matt Ryan is the best cast protagonist of the bunch. He looks the part, he’s a decent actor and he embodies the cynical and crafty John in everything we’ve seen so far. A couple of things that could hold the show back are the fact that its on NBC, who can’t rub 14 people together to watch Grimm each week or the possible restrictions that they’ve placed on the character himself. Will he be allowed to smoke? Have they done away with John’s bisexuality? There are some questions and some places where this show could go really bad, but I think as long as they let Ryan drive the bus, then at least it won’t hit a guard rail, turn over on its side and burst into flames. Plus, Dr. Fate AND Poppa Midnight have been cast? Bruh, I’m here for all of that.