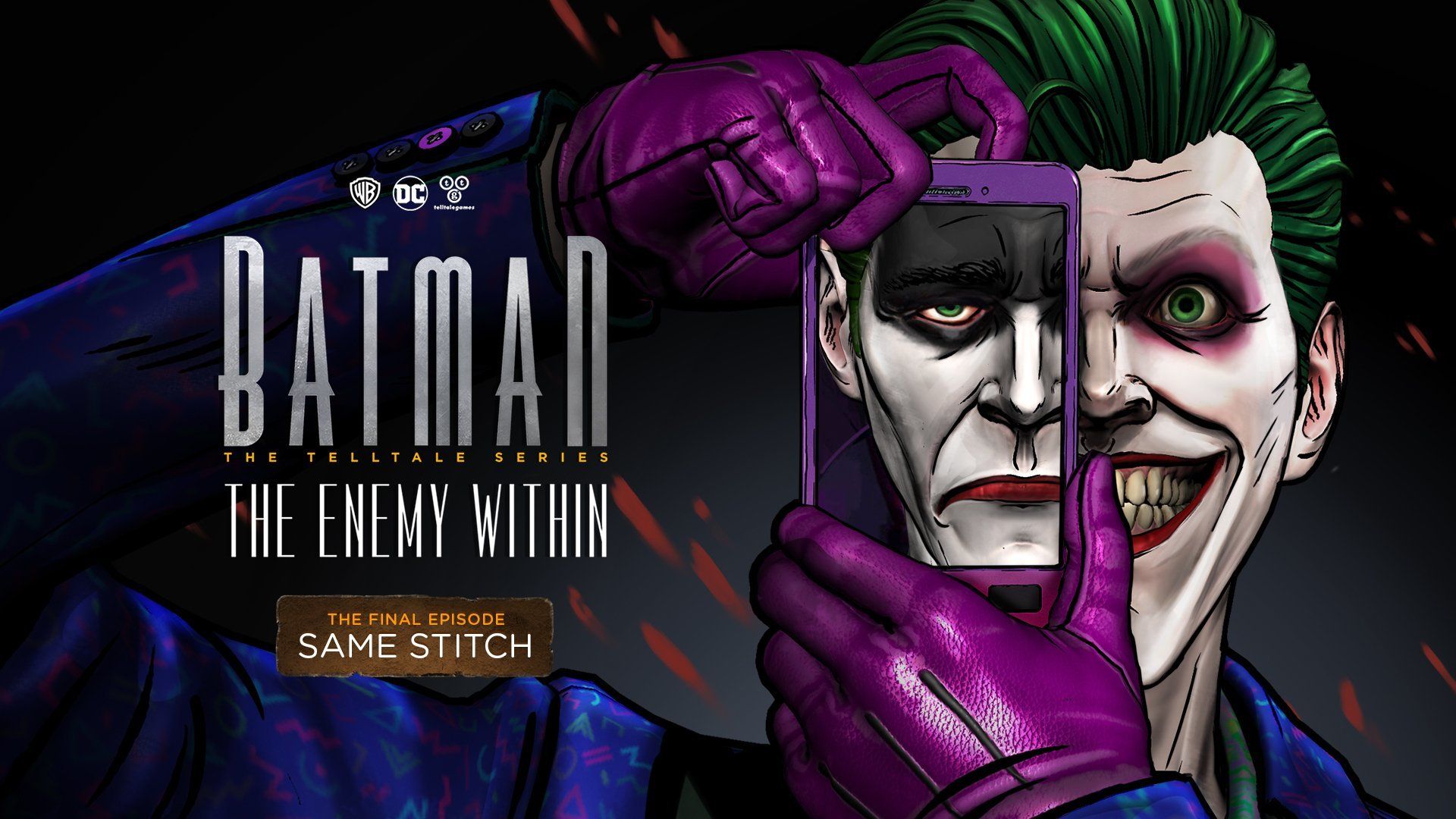 Will: Let’s be clear about something: Joaquin Phoenix can do his movie and people can still sing the overrated praise of the Killing Joke, but this is the Joker origin story we deserve. I didn’t know we needed this or were going to get it, but it’s what we deserve Mikkel. As soul-crushing as it was.

Mikkel: Telltale didn’t just hit the mark, they hit repeatedly, multiple batarangs at the bull’s eye. I was not ready for the emotional journey that started all the way in the first episode of Enemy Within, by the end of Same Stitch, I was an emotional wreck. I don’t know what you saw, but Villainous Joker was all of the best elements of Hamill, Ledger, Nicholson, and hell even Leto. Seeing the transformation was one of the most harrowing experiences in gaming I’ve had and the highlight of this week in gaming.

Will: Ok, so let’s step back for a second. Back to the first season. We don’t have to unpack everything, but when we first went to Arkham and met John Doe, knowing that he was supposed to be the Joker before the Joker…did you know he would play such a pivotal role in this season? Would you have even asked for that? 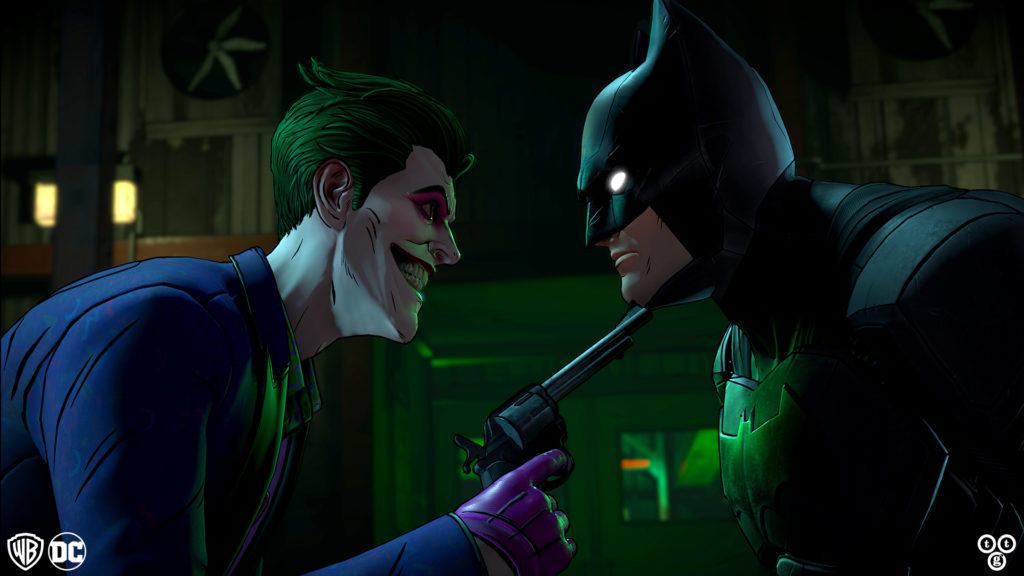 Mikkel: When the season one coda started to play out, I knew that Joker was going to come back in form for the second season. Every hero needs a villain, and it made sense to tackle the Crown/Clown Prince of Crime. But I didn’t expect to play a role in his origin story. I didn’t expect to become so invested in John Doe. But now I don’t know any other way they could follow up except with the story we got.

Will: Right. The trailers for Enemy Within were mostly centered around the Riddler but come on man. Only a handful of writers have actually began and ended a good Batman story with the Riddler at the center of it (looking at you King and Snyder), so I knew we would get other villains in the mix. And hell, but episode 3, with Harley and Bane being center stage, I STILL didn’t see this coming. But yo…when I walked into the funhouse. I knew man…there was no going back. When you found John Doe with the bodies, what was your first thought? Not sure what it says about me, but I thought…wow…I think I’m home. 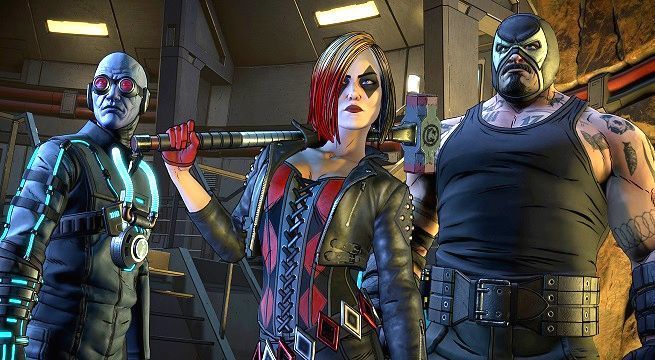 Mikkel: When I saw the bodies, every alarm in my head started sounding off at max volume. “You fucked up man” I kept whispering to myself. Not directed to the Joker, but to me/Bruce/Bats. If we step back further into Enemy Within, when Joker crashed Lucius’ funeral, that’s when every bone in my body wanted to try and change the narrative. After giving the data in season one to Vicki Vale, I’m hyper-cognizant of the meta. What the characters were in the story, and what the characters were in the canon. And here was “innocent” John Doe, clearly in over his head. Now, I tried to be nice. I tried to treat John Doe as a friend. But there was a lot of blood in that funhouse. That shit was an omen.

Will: So the meat of it is, if you had told me that I would watch John’s origin story unfold, I would have been surprised. What floored me was that I felt absolutely responsible for it. When I saw the bodies I thought…wait, did I make a bad choice? How else could I have stopped this? Going into the last episode, I was still thinking, I might be able to pull him through. And somehow, I was forgetting that I was trying to persuade the most revered and uncompromising villain in comics history. Truly a brilliant narrative stroke by the Telltale team. So…tell me about the villainous Joker and I’ll tell you about the Laughing Protector of Gotham.

Mikkel: For me, Same Stitch started with a voicemail from John Doe recapping the incident with the bridge and how he became all buddy-buddy with Harley Quinn. We then cut to Bullock sneaking up on one of the henchmen, before the smash cut. We (Batman) drop into the scene and we see a graffiti-ed truck, and we get to the back, Bullock has nails in his hands to the frame of the truck, a large gash on his stomach, and when we X-Ray, a large metal box with a digital timer. We get every to clear out and have to cut the sutures and take the box out when *pop* Jack in the box jumps out scaring the living hell out me. 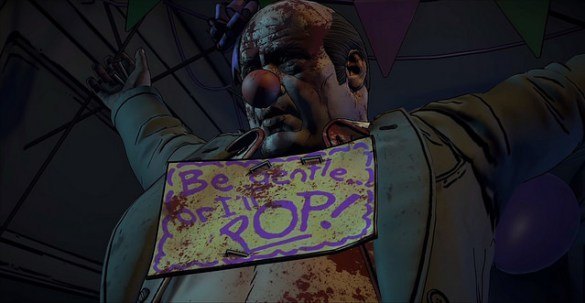 Will: Good gawd, that is a completely different game that we played man. Mine basically starts with, yes a voicemail. But the Agency is hunting John Doe. They’ve narrowed his newly acquired “sidekicks” to a water tower. As the agency begins to interrogate them, shit gets crazy and they are about to murder Doe’s peeps in cold blood. Batman steps in but is about to be overwhelmed. Then comes the Joker-rang from out of nowhere and the Joker grapples in to help you. Before you know it, you and him are fighting back to back like freaking Double Dragon or something, taking down Agency guys, Bane and whatever else they throw at you. It really is great and I would say completely different…if freaking Scott Snyder Da Gawd didn’t just do something similar this very week in Dark Knight Metal #6.

Mikkel: Clearly the Telltale team is well read and understand what makes for a good Batman and Joker. What happened after the skirmish for you?

Will: Man, we were still homies! Where things begin to separate was when you’re confronted by Waller herself, with her un-named Suicide Squad (with Harley, Bane, and Catwoman). When you get some intel to blackmail Waller and you begin to make a truce that convinces Waller to stand down, Joker gets pissed that you are letting Waller go. Yes, the Joker begins to split from Batman cuz Batman is too soft on corruption. 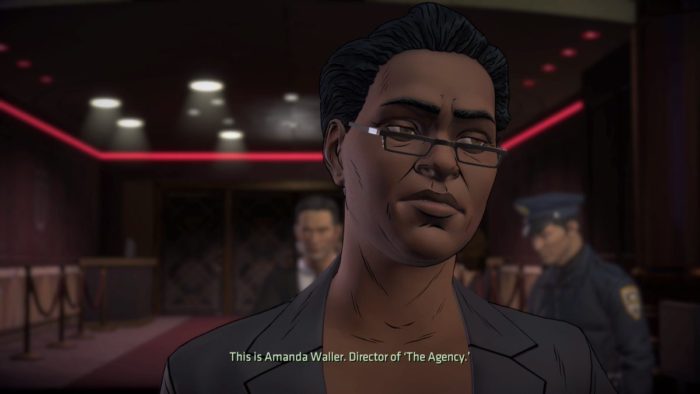 Mikkel: Yeah… two different games. After we save Bullock, we end up at a Wayne Enterprise meeting that is quickly crashed by Joker and Harley with a biological bomb that goes boom shortly after they get a gas mask on Bruce to make sure he suffers. They then detonate a handful of bombs across the city, racking up one hell of a body count before leaving with a sledgehammer to Bruce’s head. There’s some detective work, but eventually, we get a lead that takes us to Ace Chemicals. That’s when shit got real crazy. But I wanna hear more about the Laughing Protector.

Will: Well, some shit went down on the roof with the Suicide Squad where Joker goes…too far…and tries to bomb everyone. Bruce almost dies saving everyone, but in the chaos, Joker escapes with Waller. There’s a whole other section of detective work (with your new homie Tiffany), and a confrontation with Harley and the Agency again. But you eventually end up at Ace. Where…as you say, shit got crazy. Even here. Even when he’s felt that you have abandoned him. That you’re too soft on crime, that you aren’t protecting Gotham. Even before he is about to execute Waller because she won’t admit to murdering Riddler (which she has blamed Joker for), you still think there’s hope. Mikkel…even this late in the game, you still think there’s hope. It’s not until he almost gives up, surrounded by cops that he finally starts laughing. He won’t stop laughing. Just. Laughing. And then…the killing starts. And more laughing. At that point, I genuinely felt, “Oh my god…I created the Joker. This is my fault.” 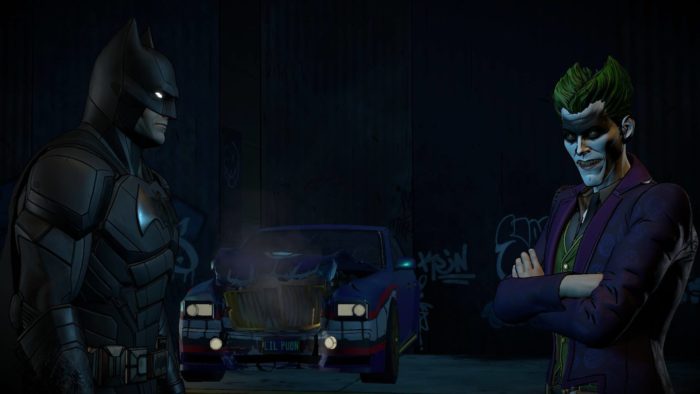 Mikkel: Tiffany also helped out with a drone to help identify some of the bomb sites. When we get the led to Ace Chemicals, it’s from Waller informing us Gordon will only talk to us. And when we get there, Gordon is on the ground and the henchmen start flooding in. It’s brutal a brawl, man. But that’s just start of the downhill slope. Joker enters and reveals that he had Gordon lure to the plant in exchange for a map that has all the bomb locations. And like, I get it. My Gordon was kicked off the force and the city he loved was about to see a dozen more explosions. I get it.

I told him to start defusing them, but Joker sends him to the ground with two bullets to the knees and has his henchmen stuff him in his car, while we get knocked out and wake back up in the Funhouse where we react (with Selina and Tracey) to finding out who killed the Riddler. We then play the worst game of “Never Have I Ever” where John is trying to get you see how toxic you’ve been to everyone around you. And damn, he might have been right, Will. He might have been right. I made my best enemy. I tried to use a friend as a tool in an investigation and I ended up bloody on a roof with a knife in my stomach. AND THE EPISODE WASN’T EVEN OVER.

Will: So…where is the Joker at now in your story Mikkel?

Mikkel: Arrested by the Agency after the fist fight. And the Laughing Protector?

Will: After numerous fakeouts of dropping him into a vat of acid (that never happens), a straight up knife fight where dude tried to legit merk me… we both fell down in a heap in the control room, him with his own knife through his hand. And the last heartbreak? “Were you ever my friend?” Of course I was John. I was always your friend…I even came and visited you back in Arkham. Tragic man…I still ain’t right. So…what the hell happens in season 3 now? 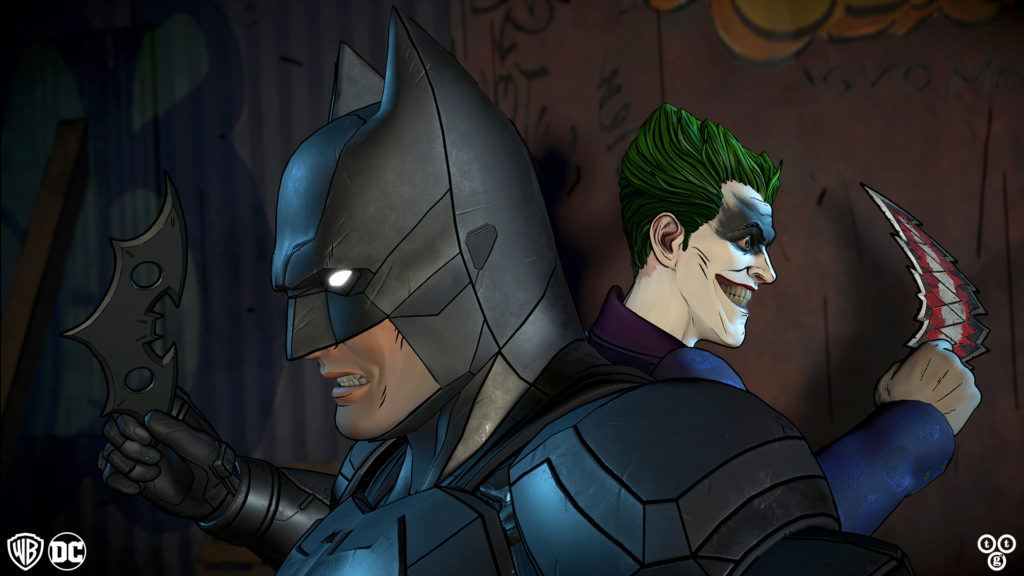 Mikkel: For me, I hope it involves rehabilitating Tracey as a proper vigilante after finding out she’s the one who sniped Riddler (honestly didn’t expect that one at all) without the help of Alfred. I let the time run all the way out on that one. I sat that there wondering if Gotham post-Joker could survive without the Batman and even seeing the genesis of the Joker, I couldn’t put the cowl away.

Will: I couldn’t put the cowl away either, and while the timer did run down quite a bit…I still made the call. Alfred, I love you man…hate it had to be you. But these Gotham streets ain’t gonna patrol themselves, nahmean? Final thoughts?

Mikkel: In a world where we are inundated with Batman media and story, the fact of the matter is that Telltale has one of the freshest, one of the most compelling, one of the most visceral takes on the cannon. They understand what makes the Bruce/Batman dichotomy so intriguing and have dissected him and his relationships with every one of the Batfamily characters. This is the first Telltale game in a long while that I feel the need to replay the story so I can see how the other side of the Same Stitch plays myself. It’s a true mastercraft.

Will: I think they did something most thought impossible which was re-invent the most treaded comic book character over the last 70 years as something truly fresh and endearing. The Joker stuff was somewhere I didn’t’ think they would go this early and they succeeded in spades. Right now…they kind of have the blank check for whatever comes next.

Mikkel: (God, please give us a Telltale Superman to save us from the DCEU).

Will: Haha, that’s a good place to end. 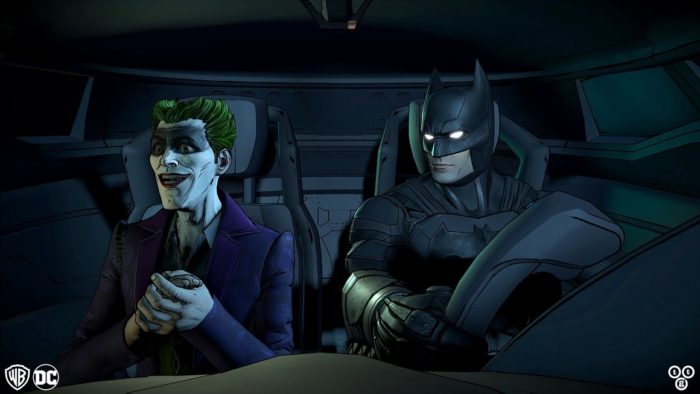