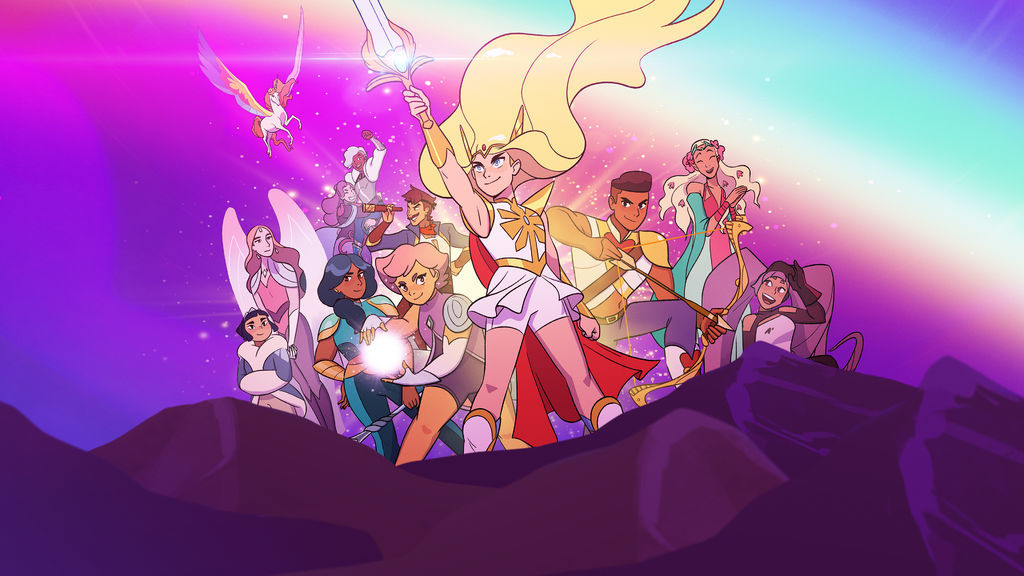 I remember the original He-Man & The Masters of the Universe, and then the spin-off She-Ra: Princess of Power cartoon shows. They were the pinnacle of a certain kind of toy-tie-in programming in the era that perfected toy-tie-in programming. (Watch The Toys That Made Us, also on Netflix for a fascinating dive into this world.)

I say this with all honesty, from an adult perspective, they were not very good shows. As a kid, things like perspective and story cohesion didn’t matter a whole lot to me. But what I did know then, and didn’t care for very much, was that She-Ra was such a rip off of He-Man! Sword. Catch phrase. Transformation sequence. All the same! Half the time, He-Man had to come over from Eternia to save She-Ra anyway. Mind you, this was 10 years before Japan blew the doors off girl-power cartoons coming to the U.S. with Sailor Moon. The early 80s was still struggling to develop a proper girl-powered cartoon in which the girls were actual people, and not anthropomorphic animals (or gummi bears). (Jem was the exception. Truly outrageous.)

Hitting play on this new She-Ra and the Princesses of Power from Netflix, I was curious how this incredibly derivative character would break free of her old relationship with He-Man.

How would she stand on her own? Would she miss him? Let me tell you, She-Ra has broken it off entirely. Watch this transformation!

Here are 3 ways that She-Ra and her princesses is absolutely new, and absolutely worth watching for you and your kids.

1) This is no nostalgia trip.

I am no nostalgia queen by any means. I’m saying She-Ra doesn’t fill me with misty-eyed memories. If this had been one 13-episode throwback, I’d have been LOST. And the show would have failed with my 7-year-old, who can barely manage references from Cars 2 to Cars 3. Luckily, there is none of that.

We start with Adora. She’s a normal late-teen girl, being groomed as a force captain in a military organization, the Horde, which she loves unquestioningly. She’s got her squad. She does typical teenage things. She’s a fantastic hand-to-hand fighter and tactical thinker. Adora is an orphan done good. She’s tough, upstanding, good at almost everything…she’s the Hero, tip to toe.

Adora gets separated from her bestie, bad-girl Catra, in the Whispering Woods and meets two ineffably optimistic do-gooders, Glimmer and Bow. They take her on a tour of all the destruction that the Horde has wreaked on innocent civilians. This opens her eyes to the fact that the army she wants to lead is in fact the Bad Guys. This is all a pretty direct lift from the original. (I went back and re-watched the first few episodes of She-Ra: Princess of Power to refresh myself.) Most of the characters were in the original by name, however, names is where the similarities end.

What follows is a fun, brightly-colored, friendship tale. Bow and Glimmer — they are the driving force behind the plot — get Adora to transform into She-Ra so she can recruit more princesses to their cause of fighting the Horde. As they travel from princess to princess (there are about 6 princesses they’re trying to collect to start), they have adventures, obviously.

Somehow, they also manage to do some thoughtful deep dives into the ways that toxic pasts can shape our present actions. Adora admits when she’s in over her head and accepts help and advice. Glimmer and Bow demonstrate considerate, honest communication and friendship. Their crew of princesses is clear about their limitations. Overall, it is an actual heroic tale that breaks away from so many old-school takes on what a hero looks like or how they act.

Nothing about this story is dependent on He-Man, Eternia, or any of the characters from the way-back. It is, in many ways, a direct refutation of those stories. We learn here that it isn’t might that makes right, it is the team. Sure, She-Ra has the sword and can smash anything they come across. But when they win, it is because they rely on each other and keep their promises.

Whew, there are so many girls in this cartoon! I keep thinking how much of an impact Sailor Moon has had on American cartoon shows targeted to girls — from the transformation sequence (so shiny!) to the color-coded aesthetics to the utterly cosplayable character designs. Like Sailor Moon and her ilk, She-Ra is all girls, all the time. We counted in the team Slack and there are 4 male speaking roles in the whole show, 5 if you include the talking horse (I do). There are twice that many female roles, including all of the computers/technology. 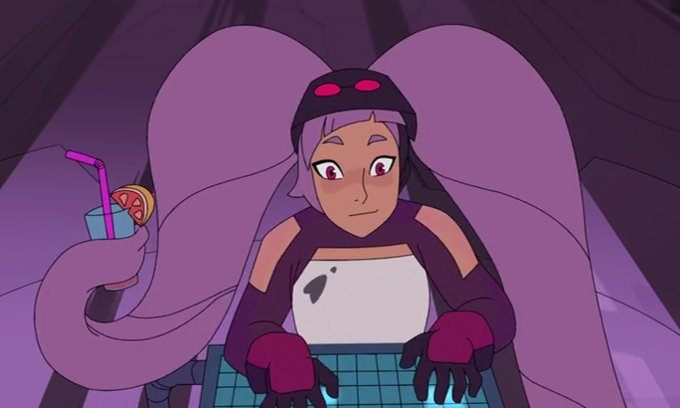 The girl and women characters are each distinct. There are tall ones, slender ones, short ones, chunky ones. Femme ones and Dapper ones. They range from flowers-in-hair to tuxedo wearing to both. None of them is the “pretty one.” There is no male gaze for which they compete. 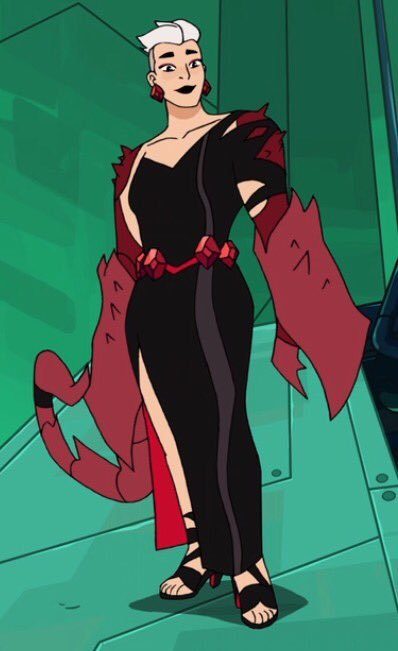 She-Ra and The Princesses of Power centers girl’s experiences. Even when they’re not comfortable interpreting those experiences, as when Adora slowly realizes that ShadowWeaver, who raised her, probably didn’t have her best interests at heart.

No one comes in and tells Adora what’s what. She, with her friends, slowly re-interprets her own past in the light of her new future. It does that even while Catra, also raised by ShadowWeaver, re-interprets her relationship with Adora in a completely different way. Their connection is the emotional core of the show, and I look forward to what happens next.

3) Not just Diversity or Inclusion, but Equity

As the conversation on representation in media continues to evolve, we talk more and more about how just having marginalized people in the background of your media isn’t enough. It isn’t enough to have a cast of people of different races/implied nationalities. That’s the first step. The next steps are to have all of these different people interacting as peers, to give all the characters access to the same powers while each of them maintains their individuality.

She-Ra would have been an easy sell for skin-deep “diversity.” Just make each character a different color and keep it moving. But Noelle Stevenson, the show runner and executive producer, wasn’t going for skin deep. As a co-writer for Lumberjanes, she’s got two Eisner Awards, Best New Comic Series and Best Series for Teens, and a GLAAD Media Award for Outstanding Comic Book. And if you’ve read Lumberjanes, you know how real her commitment to equity is.

It shows in the episodes. What could have been a flat story, led by a white woman hero becomes instead something a little more real. There is variety in character, presentation, and perspective. Each of the characters disagrees with each other, and solve problems differently. Adora, whether in her She-Ra skin or not, has muscles, and she’s not afraid to use them. Glimmer, the princess whose superpower is LITERALLY shooting glitter, is an ambitious leader and stubborn negotiator. Third of the power trio is Bow, Glimmer’s best friend who *happens* to be a brown young man. He’s the super-sociable one, invested in his friends’ happiness and emotional stability more than anything else. A show that embraces physical toughness, intellectual sophistication, AND emotional intelligence? What? Is this Steven Universe?

Much like Steven Universe, She-Ra and the Princesses of Power is decidedly not straight. Some of that is in the set up, it is an almost exclusively girl cast. However, rather than skirting around that, the episodes lean into it and allow the viewer to decide — and revel in — whatever interpretation they want. So, you can read the Princess Prom episode as a straight girls’ night out where the need to dance out weights any sexual concerns, which is why all the girls dance together. Or you could read it the other way.

Either way, the show doesn’t decide for you, and thus opens the doors for everyone to feel represented in the characters. And lest you worry that some of the queer representation is just implied but not explicit in the cartoon, I bring you Netossa and Spinnerella. If they aren’t a couple, I have no idea what’s going on. 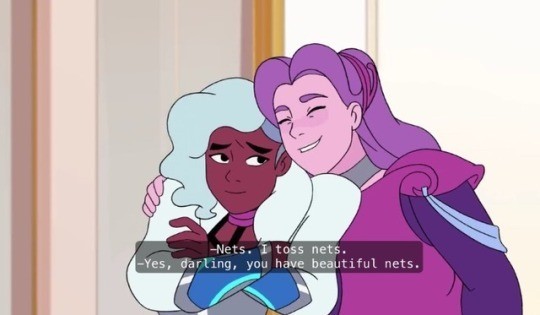 Ready to Watch, Yet?

I watched She-Ra & The Princesses of Power with my daughter, and we loved it. By the last opening, we were singing along. I was genuinely moved in the inevitable reconciliation scene while my daughter bounced next to me on the couch, loving the visual of a rainbow of power washing away the Evil Horde. (I’m telling you, there are parts of this show that are as queer as possible.)

It isn’t the best animation, not quite as good as the latest Voltron but still solid. Any image issues I may have are insignificant with a show that has this kind of atmosphere. It is fun to watch. I laughed out loud, and occasionally sighed at how sweet some line or image was. My daughter practiced her sword moves every time Adora transformed into She-Ra.

At the end of it all, I got the only seal of approval I need:
“Mom, can we watch it again?”