We’ve arrived at issue #7, the end of our arc, and it’s a great wrap-up. Nico Minoru, our tiny troublesome witch, while she wrecked our A-Force team in issue #6, also saves them on page 1 with just one word. I’ve liked Nico since Runaways, so seeing her use her powers with this team has been a blast.

Dragging themselves from the bottom of the Columbia River, the team refocuses on taking down the Countess, or in the immortal words of Dazzler Thor: 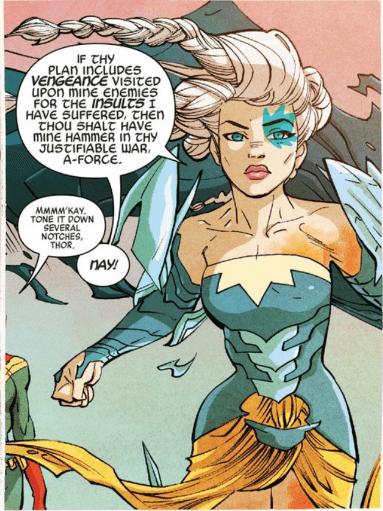 Nay, she is not toning it down, Captain Marvel. Not one notch.

Cue the plan, which involves wrestling the Countess as a dragon and doing a quick switch using Dazzler’s light powers. Dazzler and Dazzler Thor are the center of this story, their growing relationship, similarities and differences, and the threat that the Terrigen Mist poses to them both as mutants. There is a fun, sisterly vibe between the two of them that makes that threat more real and terrifying. Even as Dazzler and Dazzler Thor are great, the other characters hold their own as well. I’m constantly impressed by Thompson’s ability to hold this ensemble together, interlocking their powers and personalities to great effect. 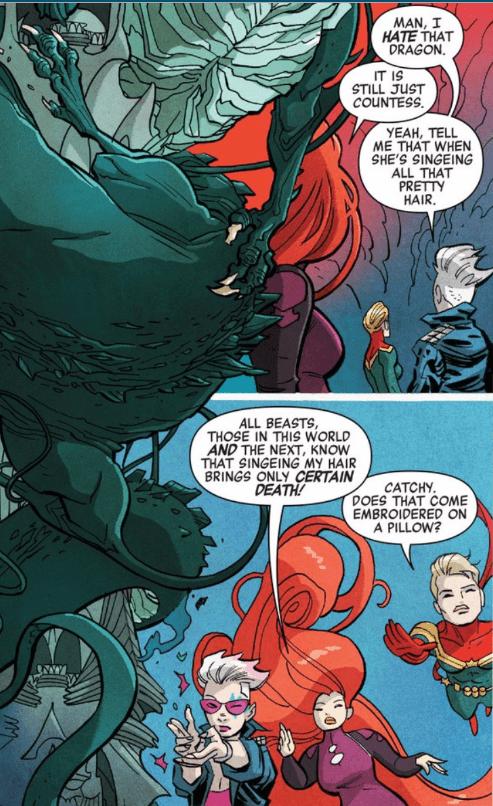 Captain Marvel, shade champion of the known universe. Medusa, a woman after my own heart. If she put “Touching my hair brings certain death” on a cross-stitch pattern, I’d make it myself.

The central fight of the issue looks fantastic, all Countess teal and Dazzler pink. The artists aligned well to bring the climax with a punch that had me cheering. I can’t give you more detail or else I will spoil the hilarity and humanity of the ending, but just know that being up on your 80’s pop will greatly deepen your appreciation of the issue.

Going forward, the artist team is changing, with Ben Caldwell rolling off and Paulo Siqueira joining up. He was one of the artists on Wonder Woman Rebirth #1, so we can expect great things, but with a very different style. This may be most fitting as the story shifts from Dazzler and her twin Thor to other members of the team. With issues #8 and #9, the A-Force team enters the Civil War II fray. I’m looking forward to them bringing their action and wit to that setting and putting things a-right… Except She-Hulk is in a coma there, right? How is this going to work?

What happens next? What happened before? Read all of our A-Force reviews, so you’ll always be ready for the next issue.