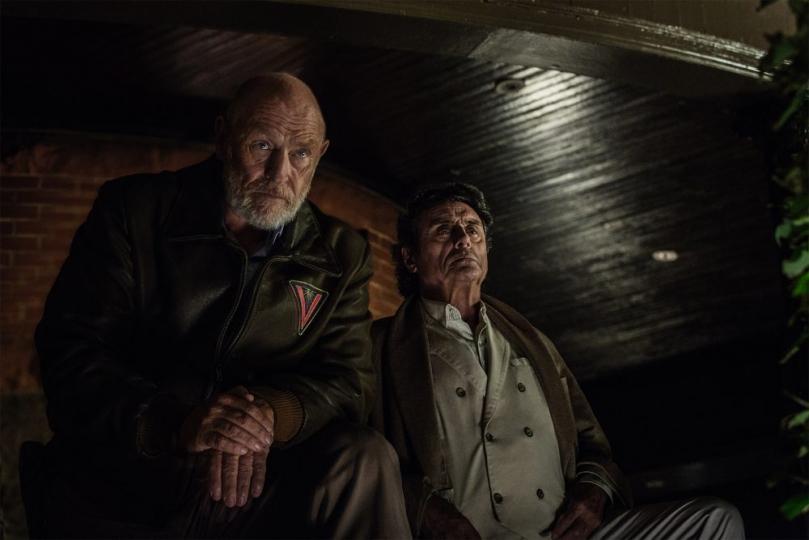 One of the most annoying habits fans get into with adaptations is the faux-foresight that readers of the original text hold over newer fans. I’ll admit it, I’m guilty of this myself. To help even the score, much like the Game of Thrones series leaving the books in their dust, episode six of American Gods pulls practically nothing from Neil Gaiman’s novel, leaving everyone in the dark for once. It’s probably my second favorite episode of the season for that same reason.

“A Murder of Gods” starts out with exactly that. But it’s not some foreign deity that the common person has barely ever heard of that gets the curtain call. It’s none other than the Bread of Life, a.k.a the Good Shepherd, a.k.a. the King of Kings, b.k.a. Jesus of Nazareth himself! (I always knew this is what I use 15 years of Catholic school for.)

The episode starts off showing a group of Mexican migrants crossing what’s implied to be the Rio Grande into the United States. The leader of the group stops to make sure the coast is clear before turning back and telling everyone to only cross if they know how to swim because the water gets pretty deep. But what can you expect? Why would some water make them turn back after coming so far? Well, besides drowning.

Watch the tale of Mexican Jesus. It is good stuff.

Lo and behold, one of the men in the group lags behind as you see the hesitation and fear intensify in his expression. Soon, the water’s past his neck and he’s sinking towards the bottom of the dark river. As he reaches out for nothing, a hand grabs his and pulls him back up. It’s a man standing on the water.

After everyone makes it across the river, a row of trucks pulls up with their headlights masking the faces of an armed militia that proceeds to mow down every single member of the immigrant group. That’s right, even Mexican Jesus. He falls to the ground with his body resembling it’s posture on the cross and a ball of tumbleweed rolls by and gives him his patented thrown crown. But it’s probably safe to presume he’ll just come back in three days, so it’s whatever.

More importantly, though, does this scene discredit Wednesday’s story about how Mexican Jesus crossed the border? I mean, walking on water is a pretty standard of his skillset.

After nearly being thrown back in prison just to nearly be killed by the New Gawdz, Shadow and Wednesday are back to walking down dark highways in the middle of the night. Shadow’s still reeling after nearly being killed by “Charlie Brown’s Christmas tree.” He has questions that Wednesday never seems to answer and he’s finally fed up.

Honestly? Wednesday lack of answers was starting to get a bit frustrating, so this conversation was sorely needed. It offers a glimpse into the premise of the story – gods fighting for their own survival.
[quote_simple]”So what came first? Gods or the people who believe in them?” – Wednesday[/quote_simple] 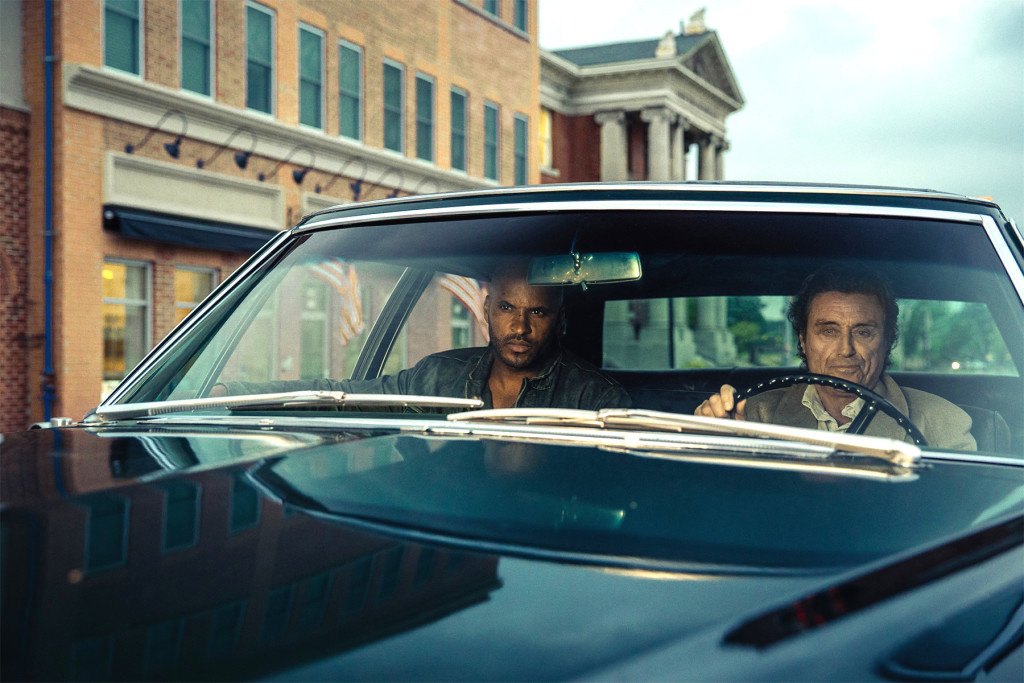 In exchange for his truth-sharing, Shadow confesses that he had a rendezvous with his (dead) wife just a few hours earlier. Instead of blowing off this insane story, Wednesday and Shadow walk back to the motel and find it empty. Wednesday’s clearly in a rush to get back on the road because he looks back in his mirror and sees Laura (Dead Wife) chasing after them. He ignores her, turns the radio up and speeds forward. Is he afraid of getting kicked so hard that his head pops off? Or is he hiding something? *strokes beard hairs*

This is when the story gets really original and becomes something great. Laura’s car got taken by the police when she was playing dead. This is when she runs into a newly released Mad Sweeney who still plans on sticking with her until he can get his coin back. He’s clearly learned that trying to take it by force isn’t an option. So he offers to help her get her body back with the help of “a guy who knows a guy” a.k.a. Jesus. Seeing that her body’s more on the temporary side, Laura agrees.

In the parking lot, Sweeney and Dead Wife try to steal a car so they can keep chasing Shadow. But they’re not just stealing any car. They’re stealing Salim’s cab.

Well, the cab he was left by a djinn. It appears that our favorite cab driver’s been driving cross-country chasing the djinn who rocked his world for a night just to steal his life away. That’s right. American Gods turned into a full-on road trip movie!

On the road to Kentucky, Salim tells Laura and Sweeney about how he lost his old life and it actually pretty relieved about it. The conversation takes a turn to Laura realizing that she’s never going to get to see her family again. Sweeney continues to rib them from the backseat – which someone apparently shit in? FAM! Was it you, Salim?? – before Laura almost rips his lips off.

Salim, the smart cookie he is, just goes for home and asks Laura if she’s dead because she’s got more flies buzzing around her than the shit in the backseat. They then trade their philosophies on life and religion. Salim, a mostly-devout Muslim, is the optimist in contrast to Laura, the pessimist who probably didn’t even believe in gods before meeting them herself. The scene ends with Laura urging Salim to take a turn off into Indiana, instead of Kentucky per their agreement. Sweeney’s asleep in the backseat and none the wiser.

Back on the road to wherever, Wednesday pulls over because Shadow’s wound from the evil tree is not only infected but moving. The next few minutes are spent with Wednesday using his fingers to a root around Shadow’s hide. It’s some real horror movie type-shit, if I’m being honest.

The next morning, the pair pull into a town somewhere in Virginia called Vulcan that’s ripped straight out of the nightmares of any reasonable person of color. It’s full of white people who love, love, LOVE guns. It’s almost understandable because their entire ecosystem is based around the Vulcan factory in the center of it, which pumps out tens of thousands of bullets a day. But these people love guns so much that they’d probably make love to them if they could.

As they drive through the town, Shadow gets dirty looks from people of all ages, usually with a rifle at their side.
[quote_simple]”There aren’t just two Americas. Everyone looks at Lady Liberty and sees a different face, even if it crumbles after questioning.” – Wednesday[/quote_simple]
We come to find that Wednesday is here to seek sanctuary from a man named Vulcan, who runs the factory in town and is actually the god of fire. You see, every single time a gun is fired, it’s essentially a prayer in his honor. People may not have the slightest idea that they’re doing so, but that’s the case. So when Shadow and Wednesday walk up to see a parade of people emptying their clips into the sky, it’s basically a Vulcan party. If you spent any time in the hood on New Year’s Eve you know the #1 rule about firing off into the sky: What goes up, must come down. So all of those bullets come down like deadly hail in a visually stunning scene.

Laura, Salim and Mad Sweeney end up back in the same gahdamned bar we’ve seen twice already. And I couldn’t be happier. Why else create such a wonderful set if you’re not gonna get as much use out of it as possible? Sure, you’ve got to come up with ways to keep people back in the tragic state of Indiana, but it works. (I’m surprised they don’t have Sweeney’s picture on the wall by now, though…)
[quote_simple]”Your man came, saw you, tasted death on your tongue, and he left. He ain’t your man anymore…” – Mad Sweeney[/quote_simple]
Over dinner, Laura tries her best to convince Salim and Sweeney – mostly herself – that she’s over her past life. Despite them being back in her home state. Reality sinks in when Sweeney reminds Laura that she’s dead and her chances of ending up back with Shadow as she currently is are slim. He even tries to speak in a language he thinks she’ll understand – anal sex metaphors.

We later see Laura stand outside of her family’s home and see her family’s moved on happily. She storms off, gets back in Salim’s cab and they trade off their new catchphrase. “Fuck those assholes.” (Which somehow takes on a triple meaning after Sweeney’s earlier metaphor.)

Aaaaannnnnnddddd we’re right back to the blatant references to lynching. This time, Shadow envisions a noose hanging on a tree and Vulcan tells him it’s a lynching tree. Shadow’s against staying, but Wednesday clearly has a plan.

Back at Vulcan’s place, they share drinks – well, the two white guys do, Shadow gets left out – and talk about a modern form of sacrifice. When we first saw the Vulcan factory, we saw a worker falling through a broken railing into a pot of molten metal. It turns out this is a regular thing around the company that operates as a sacrifice to Vulcan in the disguise of faulty building.

After some prodding, Vulcan agrees to make Wednesday a weapon, a blade, “worthy of a god.” Shadow, still cautious, asks Wednesday if he trusts Vulcan. “I know who he is. I know who he’s always been. I can depend on that,” he says.

Back at the factory, we’re reminded of the fantasy aspect of American Gods as Vulcan makes Wednesday a longsword in a matter of hours. After showing it off, Wednesday accuses Vulcan of betraying the Old Gods for the #NewGawdz. We find out that Vulcan was feeling neglected before the #NewGawdz used their power to franchise his worship.
[quote_simple]”Every gun that goes off in a crowded movie theater is a prayer in my name. And every prayer makes them want to pray even more.” – Vulcan[/quote_simple]
Feeling betrayed, Wednesday cuts off Vulcan’s head with the sword he just made him and throws his body into the same pit where so many sacrifices were made to him. Shadow freaks out and almost spills his guts  – pretty understandable, right? – as Wednesday unfastens his fly and pisses on Vulcan’s final resting place.

The final shot of the episode shows Salim saying his daily prayers on the side of the road as Laura and Sweeney watch. Salim’s last words are “Life is great” as he watches the sunrise.

Tune in next week to catch our recap of episode 7, “A Prayer for Mad Sweeney,” in which Laura turns to an unlikely travel companion to find her way back to life, and back to Shadow.

You can find all of our recaps in one easy place, behind the American Gods tag!