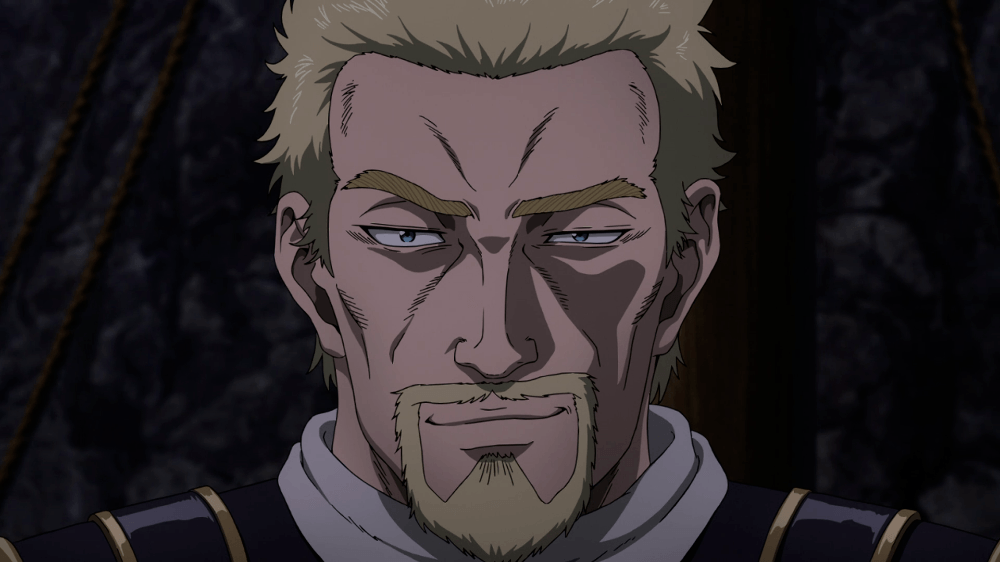 To claim that anything in anime this year could constitute “The Best” is a bold claim. We have had an embarrassment of anime riches this year. We all know it’s been a long year and tough to capture everything (let’s not forget that Dororo debuted in January, for example) but it’s been strong consistently each season. But we’ve seen Mob Psycho return, Fruit Baskets, Promised Neverland and Demon Slayer debut, etc, etc. We anime fans, have not been hurting. But Vinland Saga did some different shit. Some kick rocks away from the beaten path type shit. And it’s led to one of the better character arcs in recent memory.

Vinland Saga is an oddity for anime because it’s a historical drama about Vikings. I mean, yeah, already, we’re in some new waters. But outside of the unique setting, it is a show without a true protagonist or at least one that lasts for more than a few episodes at least. The show opens with Thors as the obvious protagonist and hero of the show and my gawd, how can we forget this opening.

For four episodes he is the undisputed focal point. A hero that rises above all by the widest of margins. But in true Ned Stark fashion, his sacrifice and death in episode four changes everything. Askeladd, the mercenary tasked with assassinating Thors delivers on what he was contracted to do. We know how these things work right? The stowaway son, who is the reason for his father’s sacrifice swears revenge and eventually will rise up to kill Askeladd, but will learn much about himself in the process. NOPE. At least not yet.

We are supposed to hate Askeladd in the beginning. I mean, he made himself so easy to hate. He kills our initial hero, then toys with and uses our new fledgling hero. Askeladd schemes over everything, double-crosses people, uses soldiers like pawns, disregards innocent people, the list goes on. Every time Thorfinn, son of Thors grows older and more deadly as one of Askeladd’s soldiers, he asks for another duel. Askeladd eventually obliges, then typically humiliates Thorfinn by showing how far he has to go.

And Vinland Saga goes on like this for over a dozen episodes. During that time, Thorfinn kind of becomes a supporting character, part of the background. He’s important for sure, but his plight is no longer the most important element of the show. You could say that the show follows Thorfinn’s journey and I guess that would technically be true. What feels more accurate is that Thorfinn is along for the ride just as much as the viewer is. He talks about killing Askeladd, but follows him into battle without hesitation. He complains about orders given to him but he almost always does it. As much as I was rooting for Thorfinn early on and hoping he would stop taking so many Ls, I realized that the story would keep moving regardless. Thorfinn wasn’t the reason to be invested in the show anymore. Sometimes, the story was dragging Thorfinn behind it. 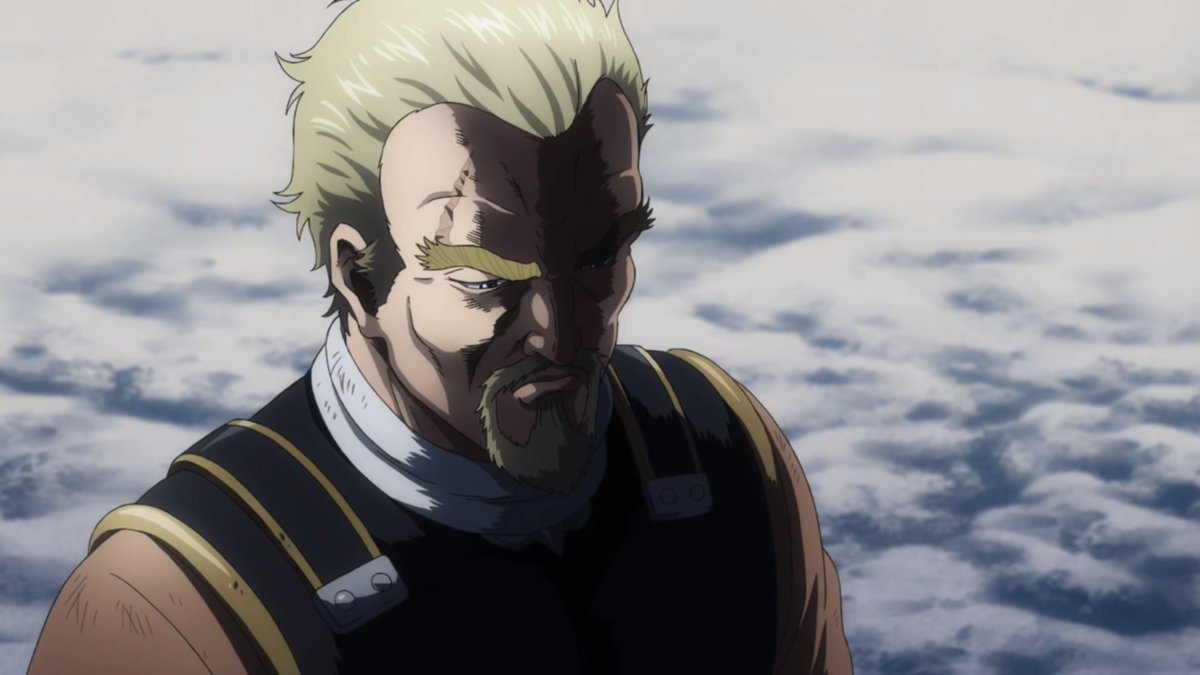 Askeladd is constant, however. Like Thanos, he is inevitable. With his importance, influence and general presence above most, he’d be easy to think of as the main character of this first season. I think the only reason we don’t is because he was so readily coded as a villain upon his arrival. But even that, is unconventional. We see bad guys get a back story all the time. It makes them compelling and three dimensional. I mean their downfall has heft beyond just wanting to see our hero prevail. But make no mistake, we still want the hero to prevail over him. Two problems with that as it relates to Vinland Saga: I no longer want to see Askeladd get his comeuppance, nor do I think a hero truly exists. Which also means a villain doesn’t either. There are plenty of shows, too many these days in my opinion, with a lot of villains and no heroes. But Vinland Saga is different, everyone has a warped sense of how the world works based upon the horrors they’ve seen. The thing that motivates them rarely so flat or one dimensional where you would root for their downfall.

Except maybe, Thorfinn, as fucked up as that sounds. And no, I’m not rooting for Thorfinn to fall further down the despair pit. But we should be real here, nobody is getting a happy ending out of this. Not Thorfinn or Askeladd or Prince Canute. I mean, maybe Thorkell since he don’t want to do shit but fight, so he only losing if he dies in his bed or some shit. But outside of that, the world is full of peril and its the world our characters exist in. Nobody understands this better than Askeladd, mercifully beating the shit out of Thorfinn AGAIN, comes the closest he has so far to killing Thorfinn, then pops a squat on a rock fence and lectures Thorfinn of why he may never beat him in a duel.

We already knew that Askeladd’s mother was a slave in all ways possible to a great Viking lord, with Askeladd being the spawn of that non-consensual union. We originally thought this played out best with his ambition. To present himself as some unifier of divided lands. Until he saw the true potential of Prince Canute and realized his ambition may be one of designs grander than possible or even needed. We don’t often see a villain, soften, re-contextualize and serve in a greater good (in this instance for the people of Wales). And that’s because we don’t usually call those characters villains.

But just because I don’t think Askeladd is evil doesn’t mean he’s a good guy. Far from it. The man killed his father on a two-year plan and framed his half-brother for it so he could still inherit claims from the father he murdered. At the very beginning of his story, he talks about how his recently departed friend Bjorg (who he killed too, though mercifully) was right that Askeladd hates warriors. He calls Vikings dumb for running headlong into battle, being consumed with glory and not doing anything larger for the world. While carrying his friend to bury him, he responds to the Prince’s question, asking Askeladd if due to his prowess and cleverness, does he ultimately want to be king. Askeladd simply answers, “I’m just a Viking.” Askeladd, through all his scheming, all his machinations and cunning, still feels like a cog in the machine. Someone who could improve his station but can never truly escape it.

His harsh words for Thorfinn (again, after beating his ass brutally) is part condemnation and part frustration with Thorfinn. He seems to want Thorfinn to best him, succeed him. But Thorfinn hasn’t earned it yet, by his intuition or cunning. So this defeat was perhaps the most devastating because Askeladd sees Thorfinn wasting away as being driven by revenge only, unfortunately, to end up just like himself and others.

Askeladd went from villain, to cold-hearted manipulator, to tragic anti-hero in one season. There have been some great characters introduced and re-introduced to us this year, but I don’t know if any of had the complicated and nuanced arc that Askeladd has. I’m sure the manga readers would let us know (please, don’t), but it seems like it will all end in tears in some fashion. But while we’re here, give me the Askeladd jersey with “Covered in Ash” on the back. That thing is going into the rafters at the end of this season.