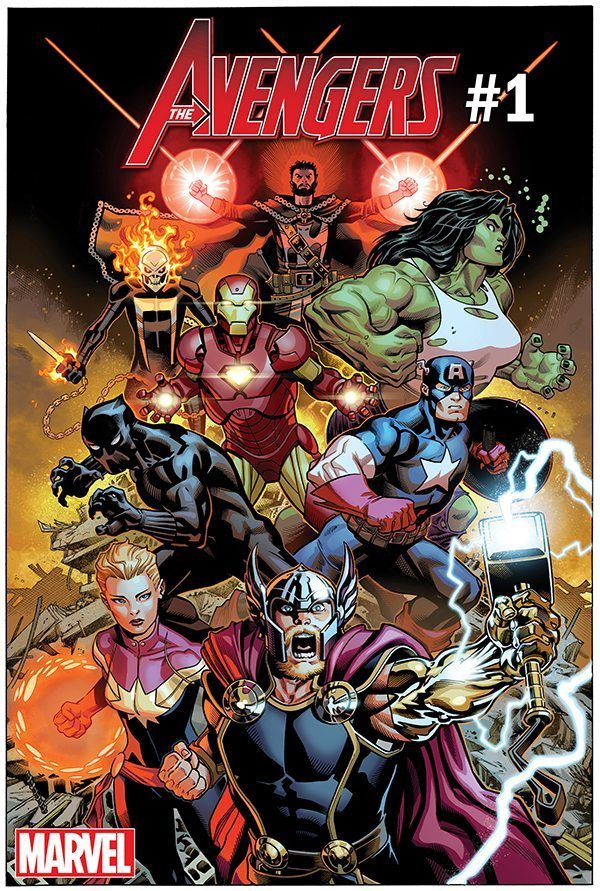 On the heels of “Infinity War” fever (don’t worry. No spoilers), Marvel releases Avengers #1 by Jason Aaron and Ed McGuiness. Mark Waid is done with his Avenger-ing and Aaron has been chosen to lead Marvel in a brand new direction. Just kidding. Big Ass Adventure Time! The comic starts with a nod to Marvel Legacy, which introduced a “million years ago” Avengers team with prehistoric versions of Thor, Phoenix, Dr. Strange, Black Panther, Ghost Rider, Hulk, and Iron Fist. In the present day, we get the most “Meta” conversation between Tony Stark, Steve Rogers, and Thor Odinson. In a conversation about whether to get the Avengers back together, Tony and Steve go back and forth about if they are still relevant or should they just pass the torch to the countless other heroes that are around and are free from all of the baggage that almost 60 years of writing will do to a character. But without dropping a beat…BOOM! Big Ass Threat! Guess the Avengers need to get back into it.

The most surprising part of this comic was how absolutely basic the dialogue was. It very much read like a 60’s and 70’s Marvel comic with painfully obvious references to various parts of the Marvel Universe. Aaron without a doubt does this on purpose. The writer responsible for “Southern Bastards” and “Wolverine and the X-Men” clearly knows his way around the English language. The simplistic dialogue pushed old school comic nerds right on the nostalgia button. This didn’t connect with me entirely, but his voice very much came through for me in his interpretation of Dr. Strange which harkened back to his amazing recent run with Chris Bachalo.

Ed McGuiness came through with some amazing art. As unimpressed as I am with “The Biggest Threat That We’ve Never Faced Before,” no one can deny McGuiness’ expertise with high level comic action. His bright, cartoony style is perfect for these big events. On top of that, the man draws faces like it’s no one’s business. Even the panels of dialogue between seated characters were a pleasure to look at.
I’m not blown away by the direction Avengers #1 is going especially being part of the generation that grew up with Bendis’ New Avengers #1. I’m old, crotchety, and hard to please. But if there’s one thing I’ve learned in my decade and a half of comic reading, it’s that if you see Jason Aaron and Ed McGuiness on a book, you give that book some time to develop.

7 “Bolded Marvel References” out of 10

Reading Avengers? Find BNP’s other reviews of the series here