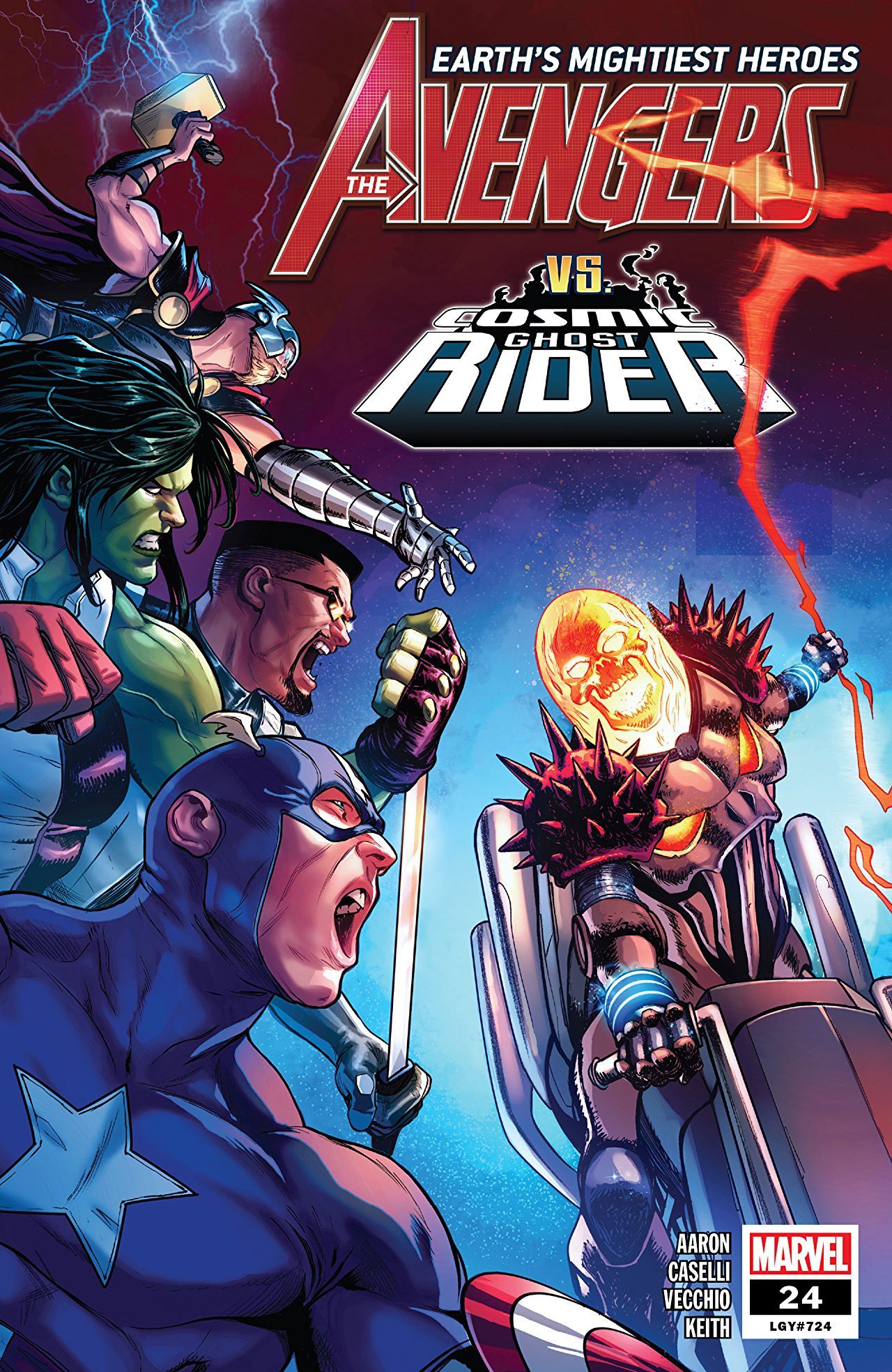 Captain America: But T’Challa! The cosmic Ghost Rider is taking on She-Hulk, Thor and Captain Marvel. What are we supposed to do?
Black Panther: Worry not, Captain. I have used Wakandan technology to give you a super punch.
Captain America: Yaas Queen! Falcon . . .

At the epicenter of my heart, I hope Aaron and Caselli had as much fun creating this book as I did consuming it. The third part of the Challenge of the Ghost Riders arc felt like a mash-up of a drug-induced nerd fantasy, expertly converging in a coherent story. Johnny Blaze, the original Ghost Rider, is the king of hell. He transports the newest Ghost Rider, Robbie Reyes, to hell for a race. The prize is Reyes’ brother’s soul. The second prong of the attack is a possession of Avenger’s Mountain (which I’ll remind you is the corpse of a celestial!). The end of issue #23 revealed that the spirit attacking their home base was Frank Castle, the Cosmic Ghost Rider from another dimension. 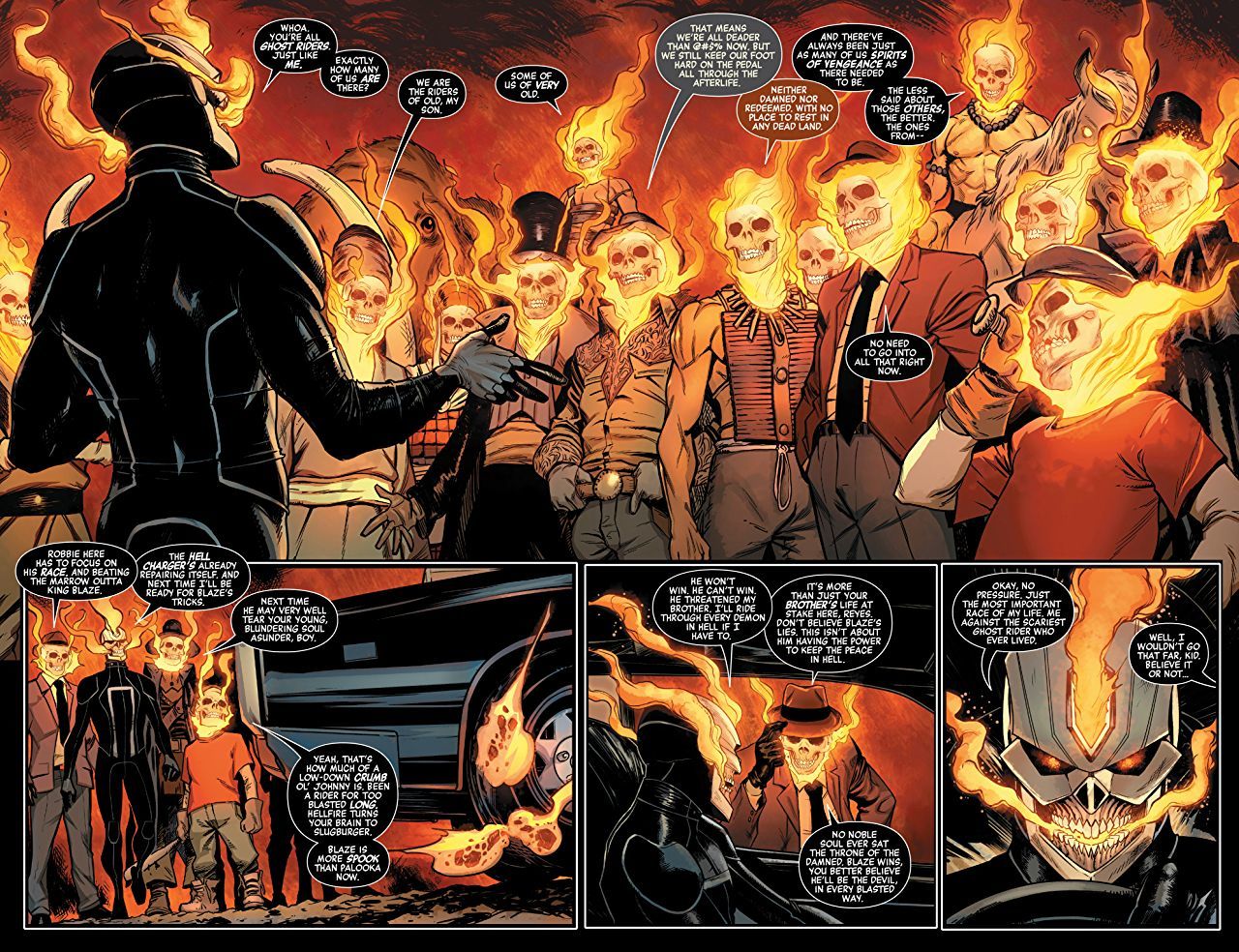 We’re met at the onset by ages of former Ghost Riders. This opening spread is fantastic; littered with Spirits of Vengeance from various decades. There’s 1950’s Madmen Ghost Rider. Circus Ringleader Ghost Rider? Great Depression era newsboy with a baseball bat Ghost Rider. Oh shit! Is Ghost Rider wearing a turban? My only complaint with the hellish plethora is that each one of them has a traditional flaming skull and it reminds me how much I dislike the newest one’s design. 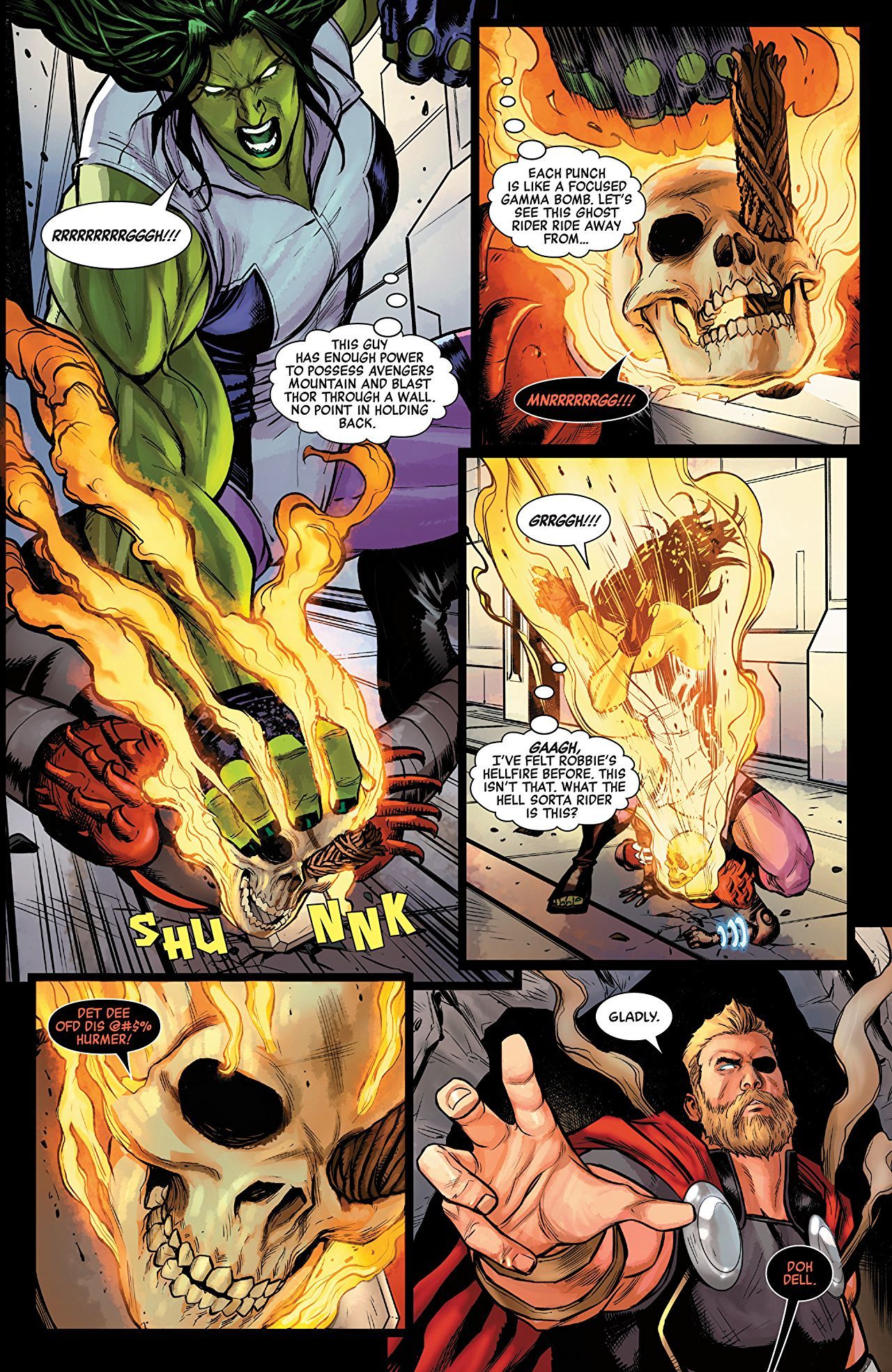 Back in the land of the living, a wonderfully anime-style fight is underway. She-Hulk and Thor struggle with Cosmic Ghost Rider’s hellfire and resort to a combo attack: GAMMA LIGHTNING! When Ghost Rider decides to switch it up with his cosmic power, Captain Marvel jumps in feeling brolic as hell. “&#[email protected] the power cosmic!”. Damn, Carol. She is not playing. Then he switches to a makeshift gun made out of Tony Stark’s spare parts. One of the most fun additions to the comic that the movies brought was the emphasis on Black Panther’s suit design when it absorbs energy. We’re granted a double punch as T’Challa shares some of that ability with Cap. I finished this book with the same energy I get after a good, over the top My Hero Academia fight. This might be the highlight of this arc and it’s enough to get me excited about continuing the Ghost Rider race.