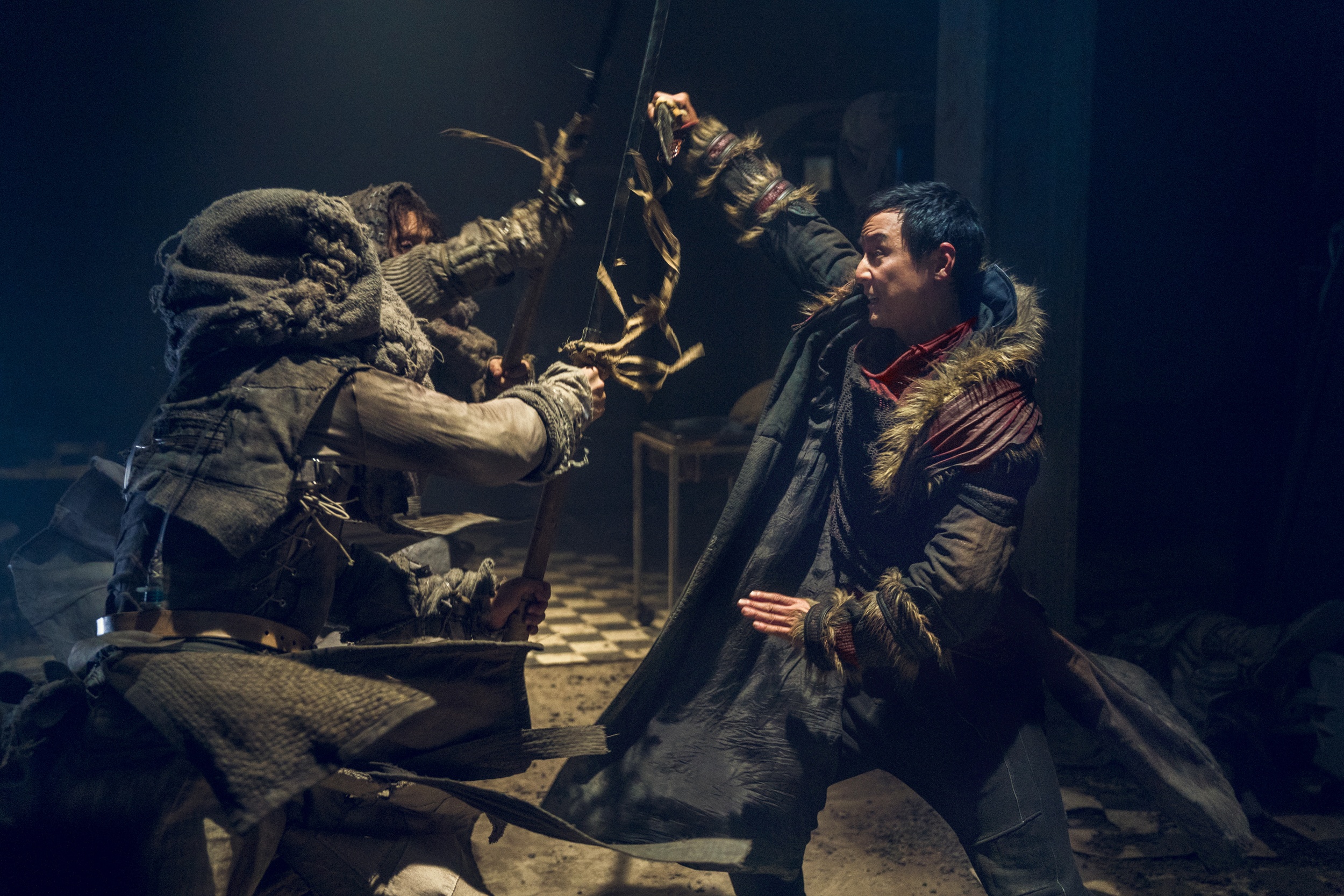 This episode begins at White Bone Manor, where we get to see the Original Badass Lady Baron herself, Baron Chau. We also meet her hot brother, Gaius Chau, played by Lewis Tan, who Baron Chau has locked up for helping her cogs escape servitude. It seems Hot Bro is really good at murder, because the Baron is willing to kill anyone her brother cares about in order to get him to help her take out Pilgrim. After seeing one of his friends executed, Hot Bro agrees to go after Pilgrim, and sets off across the Badlands.

Elsewhere in the Badlands, Bajie, Sunny, and Baby Hank meet a kindly blind dude who offers them food and shelter for the night. Unfortunately, kindly blind dude has nefarious plans. He drugs them, kidnaps the baby, and runs off, leaving Sunny and Bajie to follow. Not far behind, Nate Dog ends up at the Butterfly outpost near the border, on the trail of the fake regent. He asks around and finds out from Babyface that Sunny helped the Butterflies win the area from Chau’s clippers. Babyface talks a lot of shit and eventually Nathaniel gets fed up and stabs the kid in the shoulder. The wound isn’t much, but it’s enough to get the clippers at the border a new commander, which I can get behind. Kid’s been kinda a dick.

Somewhere that could be anywhere, Tilda, MK and, Odessa argue about where to go and what to do. MK wants to find Sunny and kill him, now that he knows Sunny killed his mother. Tilda realizes it’s a bad idea for MK to head out into the Badlands wounded and pleads with him to stop the cycle of violence and stay. MK agrees that they’re in a cycle that will definitely have to stop AFTER he kills Sunny. Luckily, Odessa is a voice of reason and isn’t having any of MK’s bullshit. She tells Tilda to let MK go, and he heads out on his own in search of Sunny.

Out in the wild, Sunny and Bajie follow the blind dude’s footprints to an underground lair that used to be a hospital. There are creepy dead babies in jars and a big ‘ole armadillo crest on the wall, leading Sunny to discern they probably aren’t very safe. Before they can escape, a band of blind dudes with swords ambush them, chain them up, and offer them two choices: join them and let their lady leader keep Baby Hank or die and be cannibalized. Apparently, the name of this episode is one big spoiler because these guys are literally Blind Cannibal Assassins.

In the middle of this exchange, Sunny has a flashback to his first hunting party as Waldo’s Colt. At the time, Waldo had been chasing a group of runaway clippers. When he found them, Waldo decided to cut their eyes out. Kid Sunny, of course, joined in the fun, and he ends up being the one who originally cut out Lady Leader’s eyeballs. He confesses all this to Lady Leader, which Bajie thinks is a dumbass thing to do as her prisoner. Agreed, Sweet Bajie.

Back at the Azra Museum, the Widow and Lydia pay Pilgrim a visit. Minerva and Lydia aren’t happy about the pamphlets he dropped onto their poppy fields encouraging the cogs to run off. Still, the Widow doesn’t need another enemy, and they decide to play nice in order to facilitate an alliance. As Cressida gets into Lydia’s head, Hot Bro and his band of bros in black attack the Museum. Castor cuts himself and goes off, while the Widow, Pilgrim, Lydia, and Cressida kick ass and take names. Castor stabs Hot Bro, but he ain’t dead, y’all. Everyone else is, though. After they’ve taken out the infiltrators and figured out they’re Chau’s men, Pilgrim and the Widow decide to become frenemies…for now. The Widow asks Pilgrim to quit spreading Azra propaganda on her land, and they part ways amicably.

Nate Moon is an Honorable Dude

Nathaniel Moon comes to the blind dude in the wilds and decides to sit for a spell, which is a bad idea. He ends up in chains with Bajie and Sunny, which he is none to pleased about. He reminds Sunny they still have unfinished business, so when Sunny escapes, he leaves Nate locked up. When Sunny and Bajie have taken out all the Blind Cannibal Assassins, they ask Lady Leader for Henry back. She let’s them know those dead babies were hers, and she wants the hope a child brings. Still, she returns Baby Hank and seems about to stab herself in the gut as Sunny and Bajie head back to find Nate Dog. Surprised that they returned for him, Nathaniel reminds Sunny he’s got to die or kill before Sunny cuts him loose. Topside, the three of them prepare to square of, but Super Soft Sunny just wants to do Dad things with his boy. Nate Dog can’t begrudge him that, and so, his honor satisfied, Nathaniel advises Sunny to leave the Badlands.