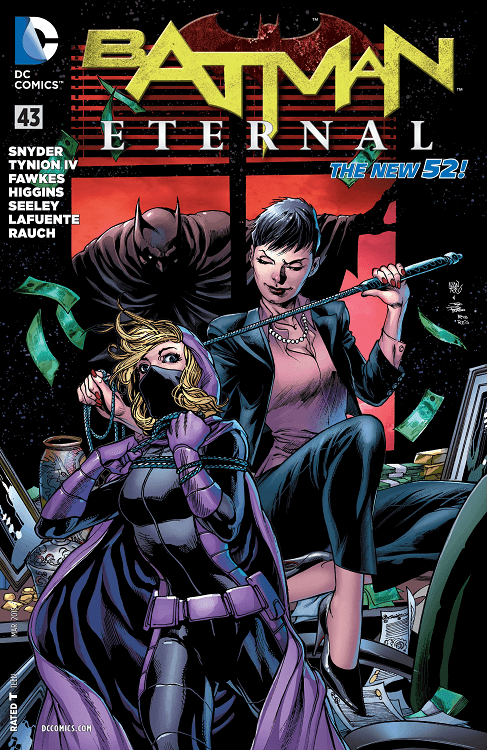 So, yeah….I’ve been panning the artwork on Batman Eternal as of late, but as far as the story goes, the creative team is tying up loose ends as the story arc enters it’s final lap. It’s nice to see so many promising setups come to fruition and live up to the hype. This week was a particularly fun payoff for those of you who’ve read this series faithfully from Day One like myself.

James Tynion IV is (long overdue) back on scripting duties this week. Issue 43 offers up some much needed team bonding between the new gals on the block, Spoiler and Bluebird. Anyone who has read The Woods along with the three part sci-fi mindfuck, Memetic knows that Tynion has a very realistic, distinctive voice for teenagers that makes for an interesting read. The other highlight to this issue is that it ties directly into the outstanding prequel story we read in Batman #28.

The way Tynion ties the whole thing together so seamlessly with the book that made many readers fall in love with the series before it even debuted. The visuals have returned to greatness this week thanks to none other than David LaFuente. It’s as if the past two issues before this one were trying to channel’s LaFuente’s lively, youthful feel and didn’t hit the mark, so DC decided to just cut out the middleman and bring the genuine article on to do it right.

Bottom Line: Better. Light years better than we’ve seen visually. And with a winning story that’s just the right blend of exposition, character development and action beats, Eternal is back on track in my book. 8 out of 10.