Almost twenty hours after leaving the theater, I cannot stop thinking about Belle. This film is my latest obsession. It has captivated my entire soul, and all I want to do is tell people how phenomenal this movie is. I know that it is an incredibly difficult ask for someone. I know that the prospect of going to a theater and being in proximity of people is not a trivial one, even with niche anime films that tend not to have full houses no matter what showing you go to. And yet, I find myself extolling the movie and experience. I found myself openly weeping in the theater and letting the ending credits wash over me like gentle waves even though I knew there probably wasn’t a post-credit easter egg (there wasn’t, but I still think you stay through the credits if only to let your fragile emotional state a chance to mend itself). I have told everyone who is willing to listen that Belle is magnificent that if I had the means, I would buy tickets, popcorn, and gas money for anyone who wanted to watch this film just so I could have more people to talk about it with. The soundtrack is the only thing I’m going to be listening to for the next month. I’m exercising a great deal of emotional and physical restraint writing this review instead of seeing the movie again, so I guess I should probably talk about the movie.

When GKIDS started to advertise the US release of Belle, the marketing made it sound like it was an anime interpretation of Beauty and the Beast. The beloved heroine protagonist becomes complicated in the life of a quote unquote beast, in this particular case, The Dragon, and a variety of things happen in the fallout. Even the direct translation of the title, The Dragon and the Freckled Princess, draws a parallel construction to its inspiration and source, Belle is so much more than that.

See, the director and writer Mamoru Hosoda has been creating fantastical interpretations of technology and the importance of personal connection since 1999 with the original Digimon: Our War Game! movie. It was one of the earliest films I ever saw in theaters and one of his first attempts to parse complicated relationships between humanity. He would later revisit the concept of how much the internet has become a part of his life with his 2009 film Summer Wars, and also the different, familiar, and romantic dynamics in The Girl Who Leapt Through Time and The Boy and the Beast. All of this to say, Hosoda has been out here making emotionally resonate media for the better part of two decades, so it’s not actually that surprisingly that Belle manages to live up to its predecessor, but my god, how I am still in shambles.

Now, I could honestly just leave the opening three minute scene here and probably be very satisfied about it as my primary argument for you seeing this movie; However, just in case you’re saving yourself for the spectacle the premise is simple. In an alternate world very similar to our own, there is an app called U. A sprawling digital world, in U, you can start over with a biometrically customized avatar referred to as an AS (presumably “Alternate Self”, but I don’t believe that’s specified in a movie), and the first three minutes showcase the fantastical world of U with a concert by its latest pop star: Belle. Of course, after the concert ends, we discover that Belle is actually just a meek 17-year-old country girl by the name of Suzu. The first act of Belle takes its time explaining Suzu/Belle’s origin and every single scene is poignant and relatable, especially to the many of us who are also children of the Digital Age. Suzu is just a girl trying to process the circumstances of her own life and finds her voice in U as Belle and also several million followers thanks to the viral nature of social media.

This all comes to a head during the second act where the Dragon interrupts her latest concert and a series of events unfold in both U and the real world throughout the rest of the film that I dare not talk about in too much detail because I want you to experience this for yourself. However, while I won’t divulge any narrative points, I will exclaim at the wonderful construction of the story and how exceedingly satisfying every story beat is.

From both a visual and aural standpoint, this movie is nothing short of a marvel. Studio Chizu combined traditional 2D animation for the real world and 3D CGI animation for U to create a delightfully expressive world on both fronts. The character designs on both sides work beautifully, and the set pieces are everything you could ever ask for from a Beauty and the Beast inspired story set in a fictitious online world. And the music… the soundtrack… oh it had me in tears at several points. The opening theme had such flourish and such personality that I instantly fell in love. My first viewing was subtitled, so I was treated to the talents of Kaho Nakamura as Belle (all of the voice actors did an impeccable job), but you will likely be equally enthralled by Kylie McNeill’s rendition of the songs and character if the YouTube videos I currently have on repeat in the background are any indication.

Belle is a movie about so many things. It is a critique and celebration of social media platforms like YouTube and TikTok. It is a coming-of-age story about the masks we put up and what it means to reveal our true selves. It is about artistry, music, and learning how to create and express. It’s about standing up for what’s right and protecting the things we hold dear. And I hold this movie dear.

There are plot points that are rushed past and over, some odd jokes that don’t quite land, but the experience as a whole was one of the most emotionally moving pieces of media I have experienced in recent times so I am more than willing to overlook the small things. Please see this movie, if not now, the moment it becomes available on streaming services so you can understand why I have fallen for the Dragon and the Freckled Princess. Every movie in 2022 is going to be judged against how Belle made me feel as far as I’m concerned, and I’ll be waiting for more people to watch eagerly. 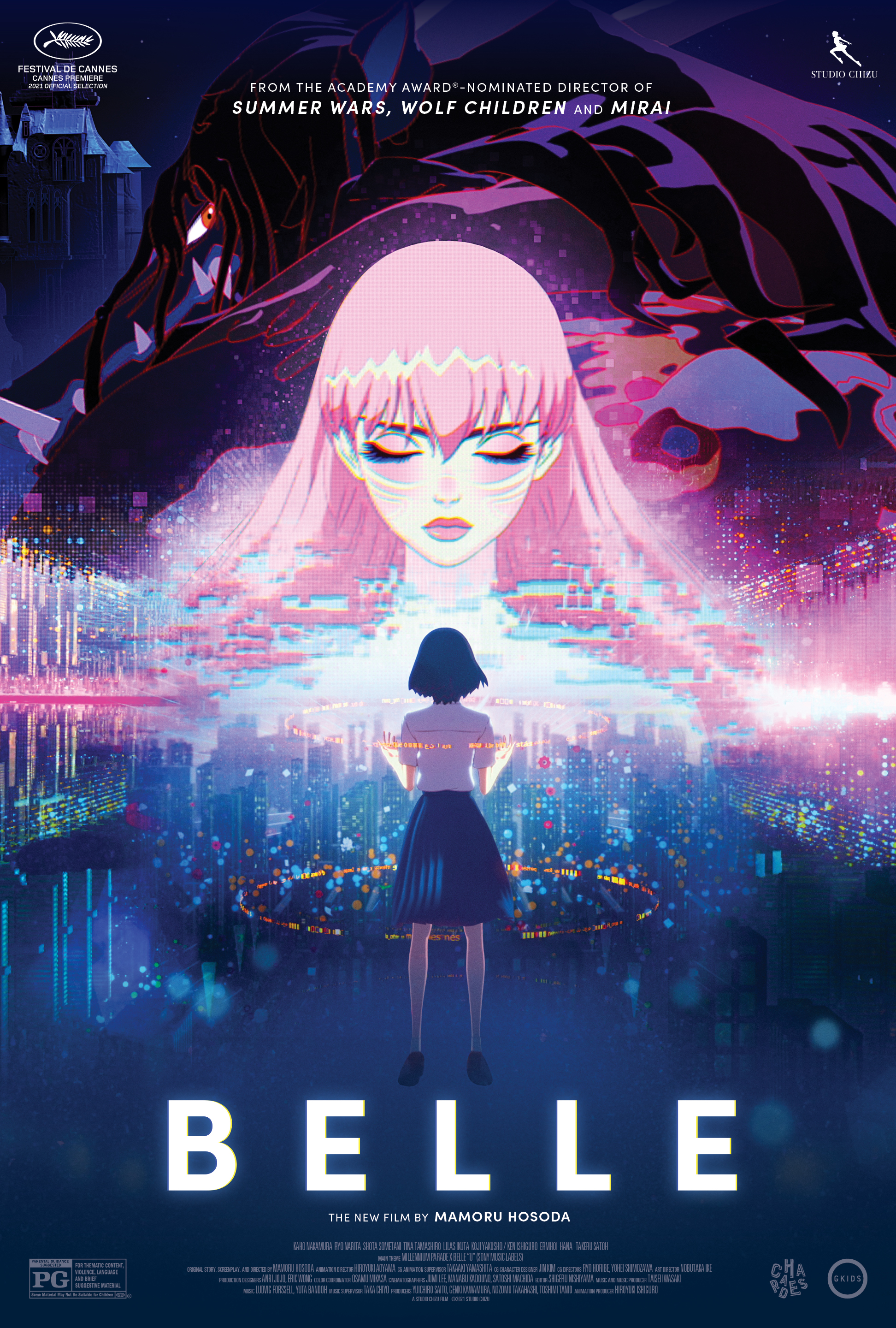