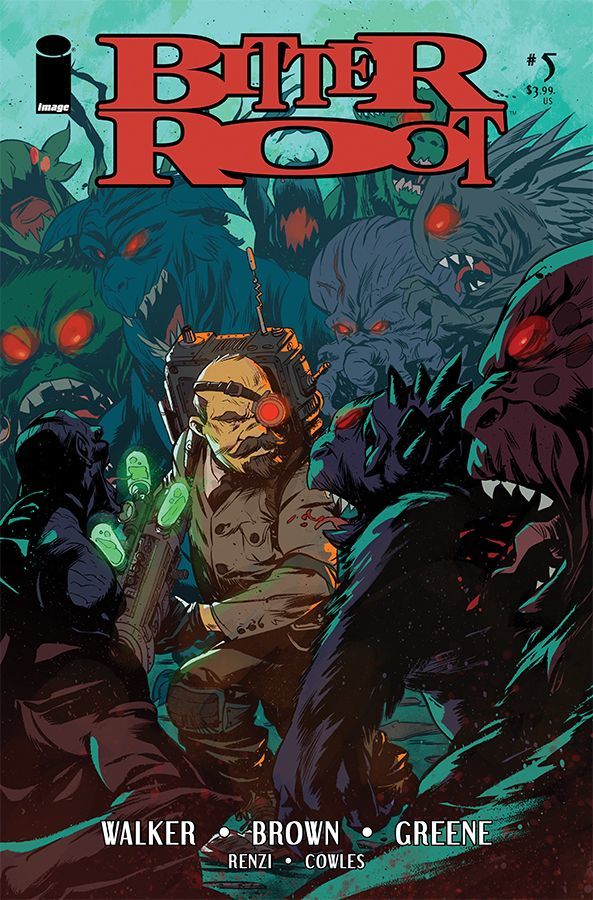 Issue #5 of Bitter Root ends the first arc of the series. It was full of action, surprises, and colors that will make you wish you never go blind.

After the disappearance of Cullen and the presumption of his death, the Sangerye’s band together to take out Dr. Sylvester and the Inzondo running amok across Harlem. But as the tide turns in their favor, some confusing yet familiar faces show up with a warning that things are about to get a whole lot worse.

I really liked this issue. Questions were answered and character arcs were completed. All while more questions are raised and new arcs start. Structurally, it hit all the points that the end of an arc should, all the way down to the cliffhanger that propels us into the next set of issues. I’ve mentioned this before, but what I like that this series has done so far is that it’s provided you with the rules of this world from as early as issue one, but it quickly flips all of that on its head. We’ve now been living in the chaos longer than we have the serenity. So as readers living through these characters by proxy, it really makes us want to root for them because we can feel the sense of urgency trying to get back a slice of life that we’ve only briefly encountered. It’s a technique that really shouldn’t go unnoticed.

The true champion of this issue was the color theory on display. Greene and Renzi are channeling Game 6 MJ with their mixtures and combinations. Color often overlooked when talking about comics. But it’s one of the most important aspects of a book. And sometimes, just like art, it can really make or break a book. For Bitter Root, the images have always popped off of the page, but there was something about issue #5 that really made them feel more prevalent. If you don’t know what color theory is, the best way to describe it is that there are certain combinations of colors that go really well together. This is broken down in a few different ways. Hot & cool, tints & shades, and complementary colors.

Each of these can be used to evoke a wide arrange of emotions, moods, and feelings. Every page of this issue felt like it was exploring every complementary combination of colors in the multiverse. And the result was a 22-page whirlwind of emotions. There’s shock, confusion, fear, joy, and wonder. It’s like cheese on a sandwich. It’s great on its own, but when you add it to something that’s already juicy, crunchy and delectable, it makes it perfect.

That analogy may have only made sense to me because I’m hungry. But I don’t care, I’m standing by it.

Bitter Root #5 had all the smoke. Action? Bet. Ass whoopins? You got it. Colors that pop more than a bowl of Rice Krispies?! Come on, son!! You already know!!!

The second arc of Bitter Root comes out Fall 2019.

9 Surprise Dimensional Portals out of 10