I can’t write this review ignoring the news of its cancellation with only two issues in on the charts. This happens ironically as I was rejoicing at how long I’ve been waiting for this series to return. I’m a fan of the original Crew and of how Coates along with Harvey have been world building and expanding the mythos of the Black heroes operating during The Golden Age of Comics. Part of me feels like I’m polishing brass on the Titanic but the larger part of me is saying, “Listen, this shit is still flames so when they unearth this mutha fucka years from now it’s going to look fresher than a pair of Air Jordan’s out the box” so let’s get to the shits.

Flashback to Ezra Miller checking out the heroes put in place by countries all over the world during the golden era, heroes of color put in place if we’re talking that real. (Aren’t we always talkin’ that tho?) Now snap back to reality in present day where T’Challa is standing dead center in the command center Ezra Miller built in Harlem with Ororo staring at him baffled. Ezra goes so deep that even T’Challa isn’t sure how Ezra got ties to Wakanda but them shits is legit. Sweet Marla partially explains what Ezra was planning. T’Challa tries to fake the funk and gets the read of a lifetime. 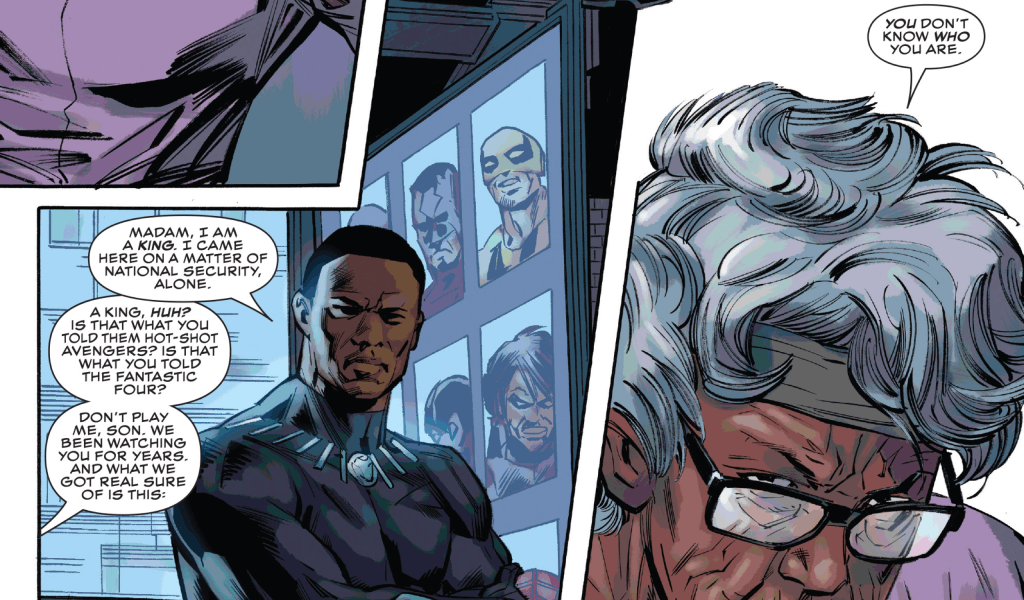 That’s a Ric Flair “Wooooo” off the strength. *Pusha T voice* That’s Rick Flair Negus! Grhmmmmm that shit gotta sting cause it’s true. I love it, there’s so much more to Marla than we know. T’Challa and Ororo take the only lead left behind by Ezra — A location downtown in South Harlem. Coates is so fucking brilliant here man. We got these two going on an undercover infiltration of this luxury condo as T’Challa’s inner monologue take us on a journey. We get the downside of Wakanda’s isolation from the world through out the years as a recall to MLK’s “Injustice anywhere is a threat to justice everywhere!” quote.

Gentrification plays a huge factor in this issue (and the story over all). The scene with T’Challa and Ororo interacting with the realtor that took an African American studies class and is so “knowledgeable” in Black culture! Yet this realtor reveals the politics of what’s happening when the “fixing” up of the neighborhood comes into play. I was eatin off that shit man. Especially the way T’Challa was surveying the room and taking everything in as Ororo got information in her own way.

Chater and Guice are pretty good with the art in certain aspects but there were certain parts of the art that threw me off. There’s a scene with Ezra speaking with a screen lighting part of his face that may take a minute to become apparent. However, they both absolutely nail the very last scene of the comic which is fucking HARD as hell. Especially the interactions with gazes T’challa and Ororo give one another.

Coates continues to give us different elements of T’Challa’s personality which is what we’ve been wanting for years man. We’ve seen this guy so regal at all times and only this year express a sense of humor (under Al Ewing in Ultimates) and a relaxed nature this issue as our favorite king sings. I mean come on man, it’s something so simple but so surprising to see from this character. You gotta appreciate a creative team that can make a character that’s been around for years able to surprise you. Marvel is going to be kicking themselves once this arc is all said and done. I promise. The Crew too live man. They way too live.