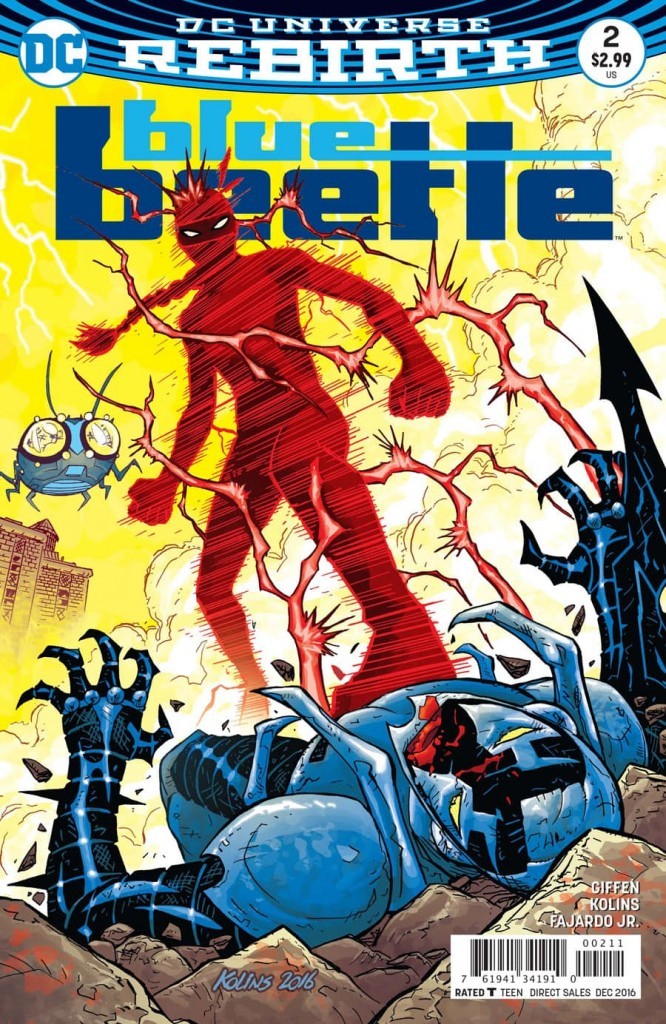 Giffen and Kolins really gain a lot of traction this issue. We got a bit of weirdness happening but before that let’s get into Jaime now having to deal with The Posse’s help. We learn the names of these local metahumans (and Root who is clearly a homage to Marvel’s Groot). What is more alarming other then the metahumans disappearing, this large ass hole, is finding out Jaime’s mother has been medically helping out The Posse. Say What? This issue becomes even more prominent when Jaime finds out Ted Kord’s role behind that as well.

The story gets strange as Posse member Blur is tailing Jaime as he explores this large hole then goes full on uber flirt with him. Like reckless type flirt, it goes from fangirling to “Okay, what is happening here?” real quick. Since she is a new character, it becomes unclear if this is just how she is or if there was something more to this. It’s really weird but there is a scene that indicates this becomes way more than the initial first impression. Don’t get me wrong, it’s a weird encounter, but a good weird encounter. Jaime was completely flustered by Blur which may have been the plan all along.

Scott Kolins’ art was great, the real stand out moment occurs when Jaime is home and the how the interaction between him and his mother unfolds. I loved the way this was drawn, as we see how the family reacts to these two going at it (especially the dad). This was a very important scene as it reminds us of the pre-New 52 family aesthetic that Jaime had with his mother and father. They’re usually open about Jaime’s heroics and to see that the mother been helping the Posse out and her reasoning is great depth and character development for his mother as a character. I am hoping the entire family and friends roster gets this treatment as the series continues.