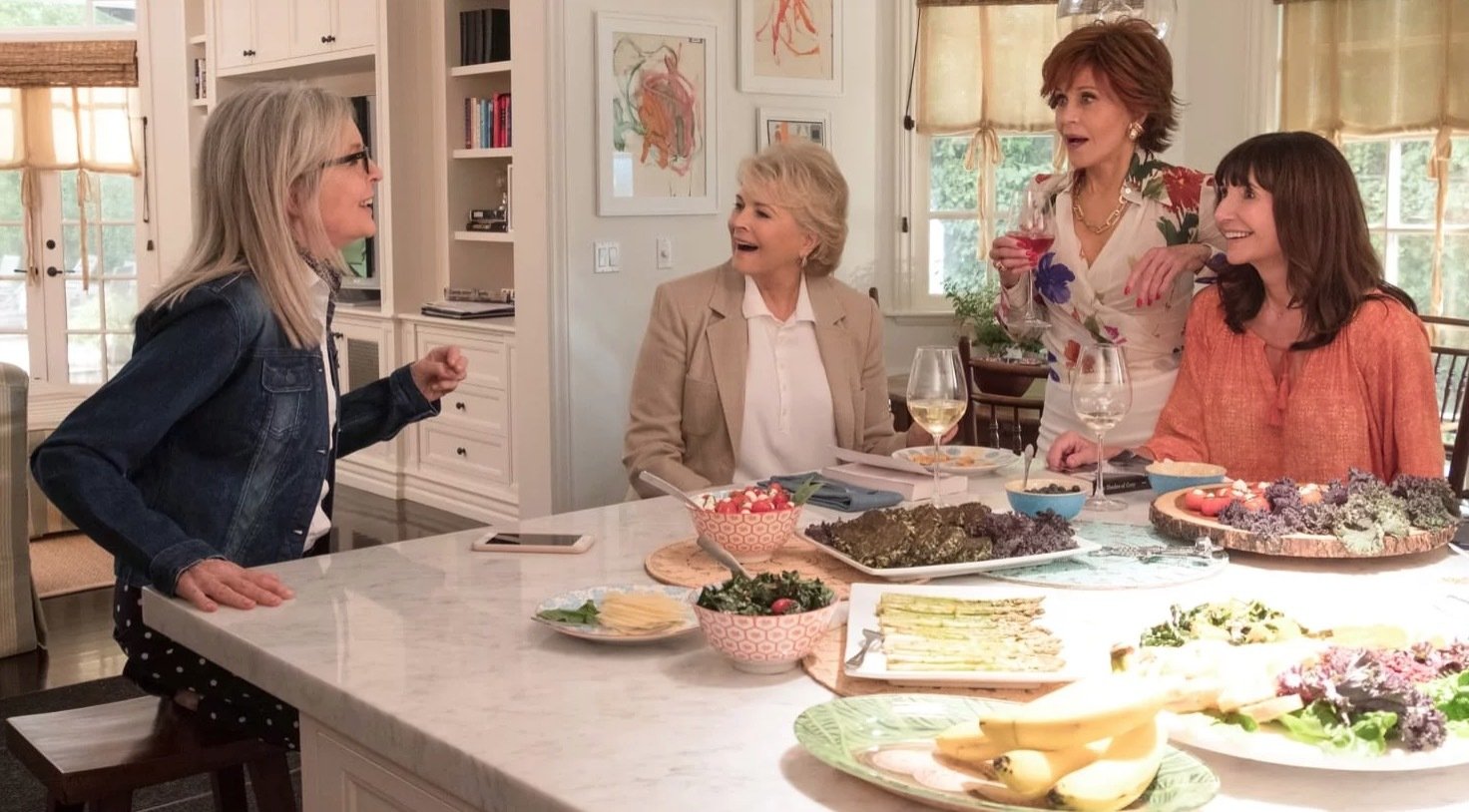 A new Golden Girls for a market of baby boomers and romcom fans.
10 Shares

With its cast of notable stars with long careers – many of them resurging, like Candice Bergen as she reprises her role from popular 90s sitcom, Murphy Brown – a romantic comedy of this sort could easily be a throwaway film. The script itself is hardly spectacular: a group of four friends, bonded for 40 years through a book club, relearn how to live with passion again despite their advanced age. In that way, Book Club flows in the same vein as geriatric comedies like The Bucket List, only lighter, minus speaking characters of color, and without the realities of aging, death, and finances. Instead, it trades those in and adds a backdrop of lifestyle porn. From shows like Entourage to practically anything on HGTV, Book Club fits the sub-genre through its low-stakes drama atop an assumed and effortless wealth and adds the twist by suggestion that aging with passion is better than aging with grace.

The premise is notably predictable, with four senior-aged friends whose marital status spreads the logical gamut of anyone’s potential options. Vivian (Jane Fonda) has never married and instead is a powerful hotel owner who traded love for financial and emotional security. “I don’t need anyone,” Vivian would say. “That’s the secret to my success.”

Sharon (Candice Bergen) is a federal judge, cat owner, and divorcé of 18 years who hasn’t had sex in the same amount of time. She is the friend most accepting of their loss of vitality. “If women our age were meant to have sex,” Sharon says in a line that best summarizes her hero’s journey, “God wouldn’t do what he does to our bodies.” Of course, that’s her starting point, and you can guess as to where she progresses from there.

Carol (Mary Steenburgen) is still married, yet her relationship has evolved into a partnership of practicality more than passion. The most hot-and-bothered of the women after reading the book that starts it all, 50 Shades of Gray, Carol is the closest to sex and fulfillment, yet the furthest from it at the same time. Hers is a story of rekindling intimacy after decades of familiarity, yet another possible future predicament for any of us.

Diane (Diane Keaton) begins as the narrator and the lion’s share of screen time feels directed towards her plot, but only slightly, playing a recently widowed woman. Hers is the conflict most easily relatable, despite having the status in which most people would think to place themselves. Unfocused on the widow part though, Diane charms the screen by simply falling in love with the added perspective of having overbearing children who treat her as if she’s fragile to the point of constant concern. Diane is essentially treated as a child, turning parts of her story into a teen movie that includes sneaking away to date because your parents don’t trust you.

Their relationship statuses and attitudes towards sex and dating offer a choose-your-own-adventure for identifying yourself in the group, selecting an avatar for your personality type the way you might with Sex and the City. And like any good choose-your-own-adventure, each path is a journey to discover the thing someone is missing as the thing they need to find – or reclaim – their full selves.

Simple and predictable? Absolutely, but to criticize the simple premise and predictability would be to miss the beauty and unrealistic charm of any romantic comedy, but especially one like this one. These four women have undeniable chemistry, more than enough to charm you right past the idea of a ruggedly handsome airline pilot owning a private ranch and helping a woman overcome her fear of flying by climbing aboard the small plane parked in his yard. Almost even charming enough for you to lose your count of the few people of color in the background. It’s absurd, but absurd wealth and charm is to Book Club as nitrous oxide is to a Fast & Furious movies. It’s the baseline and one that effortlessly neglects real-life constraints and concerns.