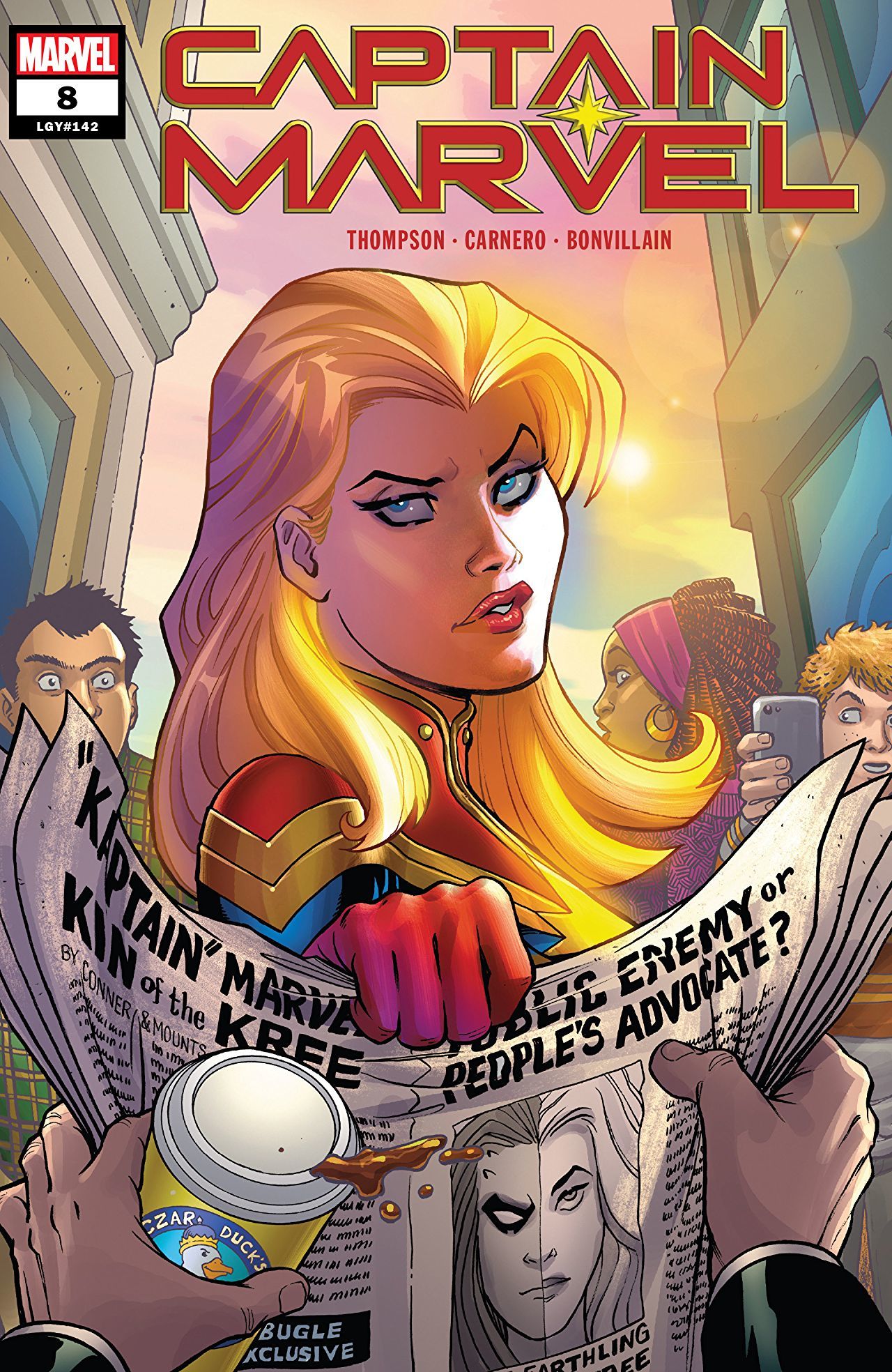 The War of the Realms cross-over event is over and we can return to our regularly scheduled show — Carol Danvers is back on her BS and the Captain Marvel comic is all the better for it. You may want to go back to review Captain Marvel #5 for how the first arc ended. The important parts: Carol is living in NYC, heroing away. She knows her mom was a Kree Warrior (the now in-comic reason for her powers), and she still has her friends, notably Jen Walters and Jessica Drew. This is important, because she’s gonna need her friends to get out of this one.

The comic opens with a framing page — it is six days in the future and Carol’s life has fallen apart. A week ago, she fought a giant kraken-like living ship. Halfway through that fight, another “new” hero showed up, Star. Star mysteriously has all of Carol’s powers, (this is foreshadowing at its finest) and proceeds to save more people, better than even Carol can. Carol also starts to experience weakness. She has nose bleeds and power failures. In this new physical state, Carol finds herself over the next few days assailed from all sides. Her loyalty is questioned as her Kree maternal relationship belatedly makes it into the news. And every time she goes to save someone, Star shows up and steals the show. 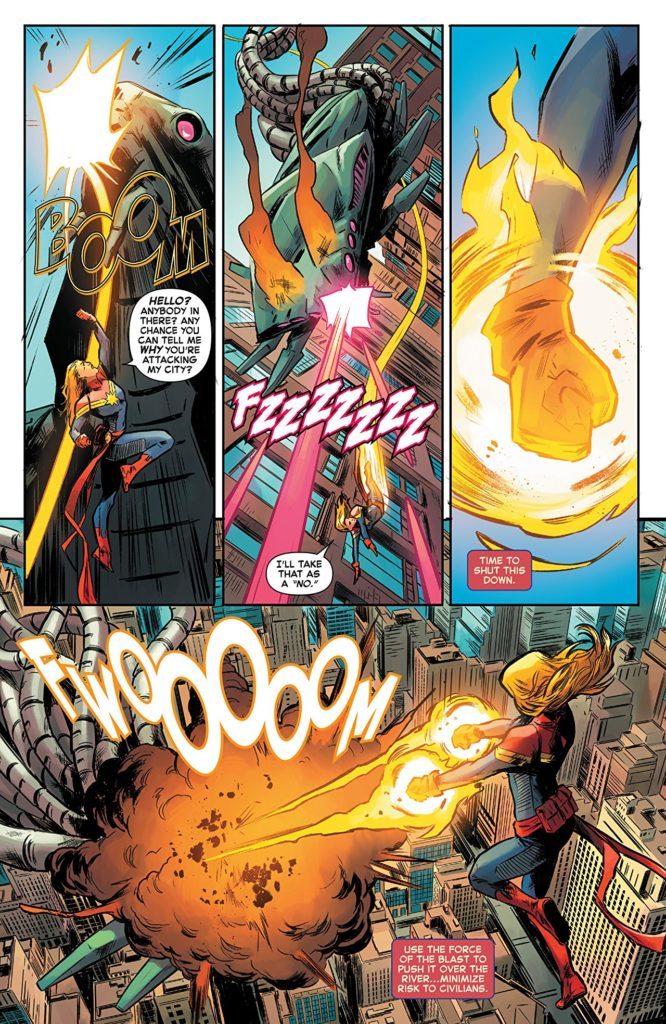 Returning to the frame, Carol retreats to Maine to sulk. But because she’s got real girlfriends, her solitude doesn’t last long. Jen and Jessica show up, along with Jessica Jones, Maya Lopez, Monica Rambeau, and Jennifer Takeda. It is a real all-women sleepover, complete with a little sparring with Hulk and the hunt for potato chips. It is fun to see Carol so well-supported. And that’s good, because another woman turns up, an old nemesis, with an impossible offer. Carol takes the bait, but what’s the price? For good or ill, women’s relationships continue to be the center of Thompson’s run on Captain Marvel. 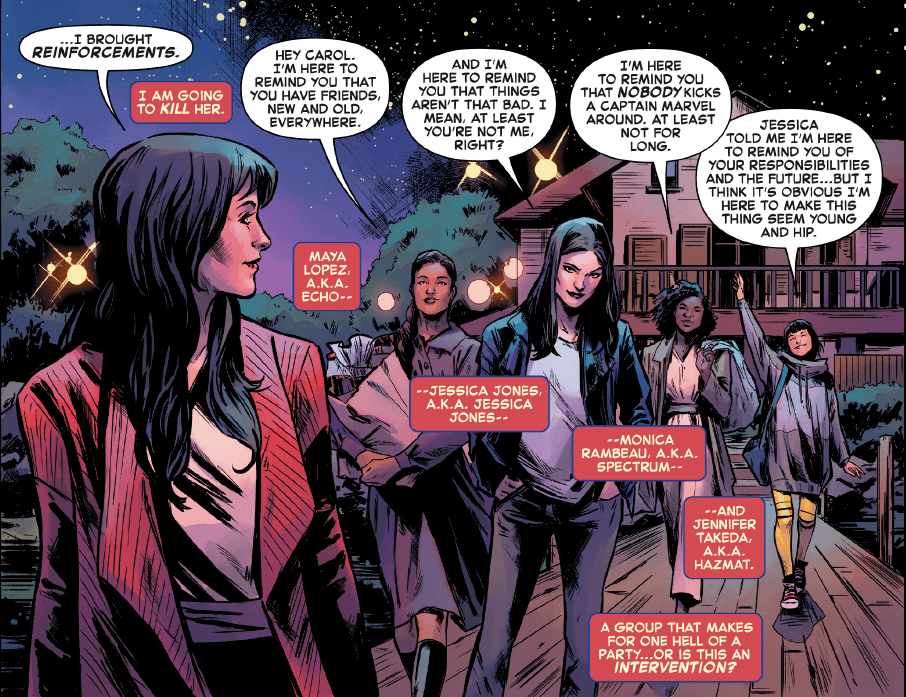 Carnero and Bonvillain are back on the art, which returns to the popping colors and strong black lines we’re used to. The action scenes are strong with the panel placement supporting the motion, whether it is up, down, or sideways. Cowles’ lettering pushes the text around in interesting ways and directs the eye well. This team really takes advantage of the medium.

I’m glad we’re back with a new plot for Carol. Thompson can show off her creativity and ability to deliver the laughs, the punches, and the hugs in equal measure. This team is only going to get stronger as they dive into what makes Carol tick and build her relationships around her.

7.5 suspicious superpowered “heroes” out of 10