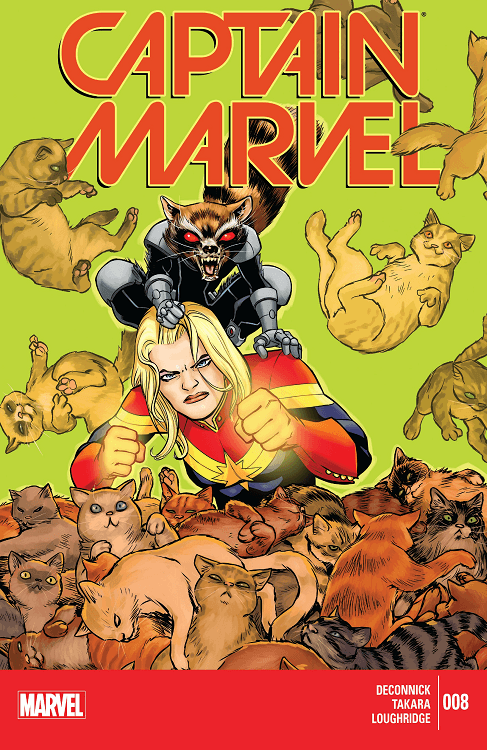 In addition to being well written with unique stories and crazy/passionate characters, this Captain Marvel book is much like Charles Soule’s She-Hulk, its just a really FUN book. DeConnick manages to turn a ridiculous and comedic effort between Carol and Rocket into a fun mini adventure. In both comics and in film, there’s this pressing need to make every conflict world altering with the fate of the universe at state. I like that this Captain Marvel book strikes the balance of having a “local” conflict (in space no doubt) and mixing significant bits of humor and action in for a short contained story. As I’ve exclaimed before, the chemistry between Carol and Rocket is still the highlight here and kind of makes you wish there was an ongoing series of their adventures together.

The art overall is still handled well and the action sequences are done at a high level. I still have the complaint of Takara’s portrayal of Carol as opposed to David Lopez at the beginning of the series. She still seems a little doe eyed compared to the more seasoned and balanced look previously. Still, there isn’t a real let down here and it still fills in Deconnick’s script adequately.

Captain Marvel completes its two part mini-story and clears the way for the next arc in a fun and enjoyable way. We should all be so lucky to get more Carol / Rocket team ups in the future because the bar has been set for their interactions.