The third and fourth season of the formerly YouTube Red, currently Netflix exclusive series Cobra Kai dropped on New Year’s of their respective years. I got to start 2021 convincing everyone I knew, and some people I don’t, to watch the 30+ sequel series of a beloved 1980’s karate franchise once it became available for wider public consumption. Then, I got to celebrate 2022 with the new converts with the fourth season. I was fully expecting another end of year drop, but the powers that be decided that New Year’s was in September this year. Honestly, who am I to argue? Every season, I end up devouring it in about a day and then immediately start rewatching the season to revisit what I remember being potentially iconic moments. Only, I find out that were just actually iconic already and the newness of it all was making me second guess things.

And while there still plenty of decisions that I do end up second guessing, I can confidently say this is my favorite season of Cobra Kai thus far, and the direction the series has taken has me wanting this franchise to outlive me.

The Valley was Just the Beginning

Season four ended in what can also be described as a total victory for Cobra Kai, now fully under Terry Silver’s iron fist. After paying off the ref as an insurance to guarantee Tory’s match against Miyagi-do/Eagle Fang Bonsai Badass, Samantha LaRusso, Terry started the next phase of his maniacal plan to bring Cobra Kai to the entire valley. We’re talking dojo expansions, aggressive marketing, and further indoctrination of the kids under his tutelage. And on top of this, all of the younger protagonists were going through their own set of personal tribulations. Miguel had fled to Mexico to try and find out more about his father. Robby had finally realized the dark influences of Cobra Kai after seeing Kenny become an even more vicious bully. Samantha was distraught over her loss to her personal rival, and pretty much Hawk was the only teen character whose confidence wasn’t in shambles, finally having found balance.

Of course, the very last scene of season four informed us that Daniel LaRusso had brought none other than Chozen Toguchi stateside to help bring Cobra Kai down, and thus sets the stage for the latest romp of inter-generational karate soap opera drama.

Welcome to The Yuji Okumoto Show

One of the smartest creative decisions in the show is the marked effort to expand the story beyond the karate conflict in the valley. While Cobra Kai’s overbearing and dominating presence in the valley is still the driving impetus, the opening episodes take the time to show an expanded scope. Miguel’s journey to discover himself while Johnny and Robby follow a few steps behind does a fantastic job of introducing a new set of thematics to the show, the buzz words of this season include “legacy,” “letting go of hate,” and “parent/child relationships.” And while these are not new to the Karate Kid extended universe, these are the foundations of the next leg of the series.

After four seasons of back and forth between the dichotomous ideologies of Daniel and Johnny, the series finally feels content with the point. The two former rivals feel like they have actually made amends and have come to some sort of mutual understanding. Of course, they are still poised against the corrupting dogma of Silver (and to a different extent, Kreese), the fact that it no longer seems that the two are likely to regress is a much needed step into new directions.

This newer direction is further fortified by the heavy inclusion of Chozen (Yuji Okumoto). After being the highlight in season 3, it was truly fantastic seeing him return in a major role. The redeemed karate assassin is such a wonderful addition to the main cast, providing a stellar mix of comedic and dramatic moments, while also showing off some of the best technically choreographed fights in the series to date. He’s a crucial addition to the task, helping deepen the mythology, and in many ways signifying that evolution is not just possible, it is a requirement to survive.

However, the character that perhaps offers the most new life to the show is Terry Silver. Now in complete control, Terry Silver feels like the megalomaniac, evil super genius that Karate Kid 3 tried to paint him as all those years ago. Silver-haired Terry Silver is almost egregiously, comically good at social engineering and manipulating people. With seemingly limitless financial planning, friends in high places, friends in low places, it veers into comic book-ish territory with how outlandish some of the machinations in play are. That said, Cobra Kai exists in the realm of fiction, and his grand vision of expanding Cobra Kai to the edge of the goal feels both consistent with his introduction and provides a nice contrast to the myopic Kreese, whose singularly honed goals kept him contained in seasons prior. It certainly helps that previous throwaway lines from the third movie are now crucial plot points that help anchor the gravity and longevity of the series as whole, as he enlists the help of the equally virulent and brutal sensei and new-comer to the series, Kim Da-Eun (Alicia Hannah-Kim), the daughter of his former master.

And to Thomas Ian Griffith’s credit, he plays the darkly, charismatic figure incredibly. As ridiculous as some of the dialog is and the seven moves ahead type of reasoning that occurs, Silver is composed, calculated, and vividly vicious. The back and forth between the smooth-talking businessman and the virulent, abusive coach is stellar to watch and anchors several key parts of the season. Silver makes good on his threat to make Daniel’s life even more of a living hell than in Karate Kid, and Ralph Macchio rises to the occasion of playing Daniel at his absolute lowest.

At the end of the day, Cobra Kai is an ensemble series, and the main cast at this point has roughly 14 major characters and an aggressively large support cast with several guest stars that cycle in and out. While every character does get at least one banner moment this season, due to the number of different pieces on the board, that one banner moment is singular in nature.

There are stellar performances, if not a little one note all around. Xolo Maridueña continues to steal the show when he’s on screen and the focus on his character in the few episodes was a welcome breath of fresh air. Furthermore, I have to give special props to Peyton List managing to efficiently cultivate Tory’s redemption at the blistering pace required, and Dallas Dupree Young’s fully embodying Kenny’s Cobra Kai induced transformations

Some of the main cast have stopped going through character development (which after four seasons isn’t the worst thing in the world), while others have explosive character developement that follows logically from a narrative stand point, but still feels quick in the moment. In particular, Hawk (Jacob Bertrand) and Robby (Tanner Buchanan) shine on screen and in fights, but they only have a couple quiet moments of revelation this time around.

It still works, as the writers were able to focus the spotlight on characters when they needed to, but you may notice that some of your favorite characters aren’t getting as much screentime with all of the things going on, particularly the students. There’s a lot of focus on the adult cast this time around with Johnny and Carmen dealing with some unexpected news, and Daniel having to deal with his nightmare scenario. And funny enough, during the bulk of the seasons, most of the kids are supervised by an adult, although there are still plenty of times where they get into their own adventures.

One of the pivotal moments of last season was Daniel instructing Samantha to use whatever style she needed to in order to win. This understanding that there is no singular path to progress or victory was a particular resonant idea, and one that carries over into this season.

The fifth season of Cobra Kai centers so much on the concept of legacy, of what we pass on and why we want to pass it on. It presents the idea of continuation and perpetuation as concepts that can be selfish and selfless. A nobility in wanting to preserve tradition, and a perverseness when it comes to the extreme means that can be implemented to do so. The parent/child, student/teacher relationship that have always been underpinning the show are at their best (and worst) this season, as the show begins tackling much more nuanced philosophies now that the high school rivalries have been laid to rest. The conflicts of the past are now fables, stories meant to inform the future actions, not dictate them.

It makes for compelling drama, that is inter-cut with several incredibly timed comedic moments. And the action is still top notch with stunning direction, cinematography, and musical curation. It was never in doubt that the show was going to maintain its high quality of fight, but this season proved that they are willing to keep innovating and elevating.

It’s the Belief in the Story That Matters

This marks a new chapter in the Karate Kid extended universe. The scope of the story feels larger than ever and the passion that the producers have for this franchise has never felt more paramount. While there are still minor missteps, punch for punch, kick for kick, Cobra Kai strikes an incredible balance between leveraging the nostalgia of a nearly 40 year old franchise and the promise of new stories.

It is a unique blend of comedy, drama, and martial arts that has managed to remain one of the few series I constantly rewatch over the last years just because of how endearing it is. Cleverly constructed and written, wonderfully acted, and truly a spectacular vision of what can be done when you use old IP as the foundation to build something new instead of trying to reinvent the wheel.

So, I’m going to need everyone to fall in line and catch up on Cobra Kai as soon as you’re able to. There is so much I want to write about that I can’t because spoiling the spectacle of the season would bring great shame to my name. So, I’m trusting you to tune in this weekend. 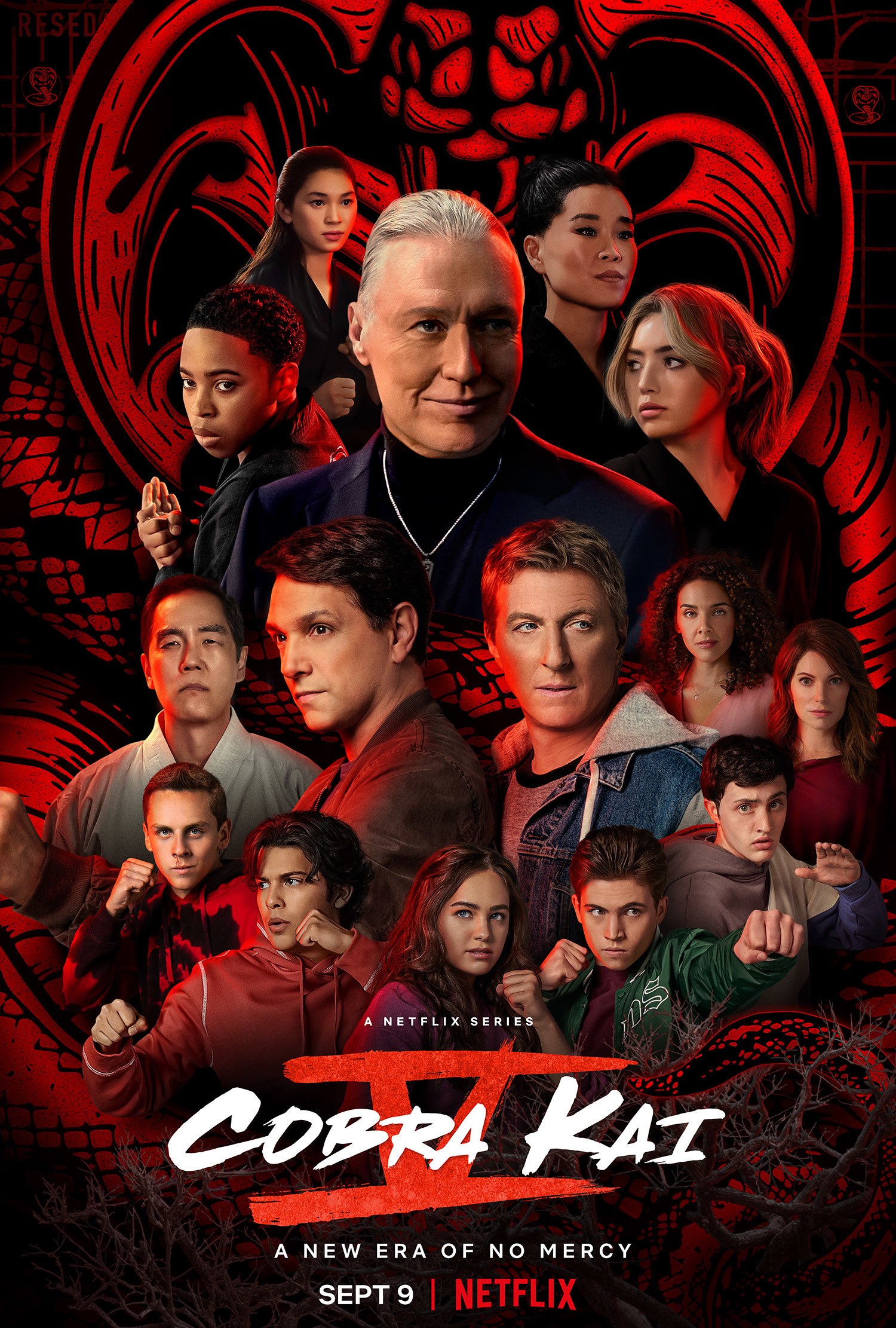