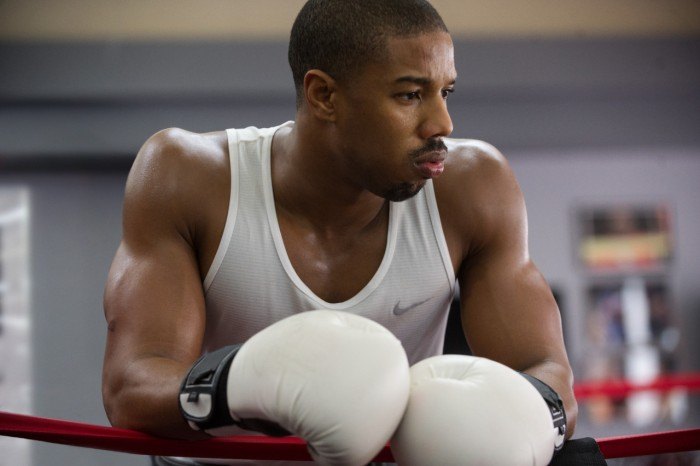 No jokes. No witty intros. Let’s get right into it. Y’all want a review on Creed? You wanna know how the cinematography was? A nice little synopsis to see whether to watch this in theaters or wait till it comes on TBS? Listen, fuck the frail shit, I’ma keep it 1 hunned and tell you that on everything I love, NO ONE SPIN-OFF SHOULD HAVE AAAALLLL THAT POOOOWER! This shit so real I brought Jordan Calhoun on the track because there are so many elements that makes Creed the most masterfully-crafted story (not just “underdog story,” not just “sports story”) of 2015. Period.

When the audience first meets Adonis Creed (Michael B. Jordan) it’s after seeing how his adolescence was spent in foster care. We see this boy scrapping and know from jump he ain’t with the fuck shit — this kid already has it rough, which becomes such a stark contrast to the life that is provided him once Mary Ann Creed (Phylicia Rashad) comes into the picture. Adonis grows up and has an amazing knack for boxing, but doesn’t openly pursue fighting knowing his mother is against it. We find that even at his father’s gym — or anywhere in Los Angeles — he isn’t allowed to get into the ring out of their respect to his mother.

Which is what takes him east to train in Philadelphia, seeking out our favorite, charming boxer Rocky Balboa (Sylvester Stallone) for help. The added bonus is getting to meet Bianca (Tessa Thompson), a talented musician who — after a hilariously turbulent first impression with one another — eases Adonis into the atmosphere and culture of Philly. Bianca isn’t just a guide as she checks Adonis on his insecurities, worries, and consequences of his actions. Maaaan, Bianca so Philly strong with it in her support for Adonis as well as her own career. Plus she got the hottest up-and-comer in the game doing them braids! Fuck with it! I dunno how much blacker you want it to get, cause it ain’t ’bout to get any blacker than this. 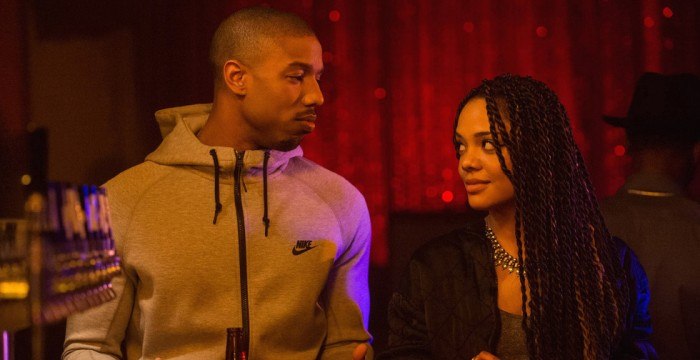 Creed comes across as so much more than just the millennial’s underdog story due to the history behind the Rocky series, how well crafted the script and dialogue are and as well as seeing how much Philadelphia has changed (or stayed the same) over a span of 40 years. You would assume Adonis’ trying to make a name for himself would be the main staple of the movie, but it isn’t. Family is the over-arching theme of this entire film.

That theme is handled so beautifully and so gotdamn black: we see it when Mary Ann takes Adonis in, the way Adonis connects and interacts with Rocky as if he is the uncle he finally gets to meet, including the love that comes over Rocky as Adonis and Bianca breathe life into his home over dinner. Michael B. Jordan displays how great an athlete Adonis is and the turmoil he has dealing with his father, but it’s the unselfishness that makes Adonis such a joy to watch. The way he helps those he considers family without a second thought makes him a fucking treasure. Adonis unknowingly gives Rocky a new adventure, but more importantly a new family member to look out for. Adonis represents a legacy that Apollo invited Rocky into, and it’s Rocky’s responsibility to pass that on to the heir, Adonis Creed.

However I’ll tell you something you already know, the world ain’t full of sunshine and rainbows, and neither is this movie. Adonis is not the only one having to fight in this movie. We see the struggles that Rocky and Bianca face as well, and the contrast in their approaches to adversity. I’m talking pathos, people! Drama, folks! Y’all wanted that well-rounded movie, right?! Y’all wanted the American flag fighting shorts to come back? It’s here! It’s fucking here. Jordan take ’em to church right now ’cause I don’t think these folk hear me.

And let the people say “Amen!” For those newer to the Rocky series, or less interested in an ongoing saga that dates back to 1976, Creed views as a modern reboot of an old classic: an underdog gets their shot, and heart fills in where skill falls short. And for newer viewers, that — along with thematic tones of family, legacy, and self-worth — is enough to make this a compelling film to watch. For the other viewers — those who can name Rocky’s opponents across three decades; those who quote “If he dies, he dies” when no fucks are given; those to whom YouTube recommends Carl Weathers interviews and training montages based on past search history — to them, this movie represents a continuation of the story we love, but also an homage to forty years before it.

Creed seamlessly brings the Rocky story into 2015, without Rocky as the focus, hero, or savior of the film. In fact, the strongest presence is one that is hardly seen, yet fully saturates each stage of the film, and that is the memory of Apollo Creed. A man of almost mythical-sounding legend, we hear every character referencing Apollo Creed from their various perspectives, from Bianca’s casual declaration of him being the most famous fighter to ever live, to Mary Ann Creed recalling the nights of carrying his destroyed body up the stairs, to ESPN’s Tony Kornheiser and Michael Wilbon declaring what he means to the sport. And it’s all especially interesting because not only were we privy to having watched that backstory with our own eyes, but it gives further depth to that character long after his run with the series. Thirty years and three movies later, we still feel ripples from the most dominant and prolific boxer in history, so much that there are times during Creed you’ll forget he’s not real.

While the film follows the legacy that Apollo left behind, the need for Adonis to make his own legacy is driven home often and repeatedly, so much so that the phrase “make your own legacy” seemed to speak to the character within the film as much as the film itself. For so long did Adonis try to avoid his father’s shadow. He took his mother’s last name and grew up holding the secret of his father’s identity just to avoid the comparisons, and the flash of rage is evident every time someone notes his resemblance to his late father. Still, he loves his father, and the admiration of his legend leads him to embrace it sometimes — even quite literally, in one beautiful scene where he shadow boxes under a projection screen in his home, reliving the rematch between Rocky and Apollo. The movie itself has the same challenge, needing to mirror the best of what made the franchise what it was, while evolving enough to not simply duplicate it. A difficult tight-rope to walk, Creed manages to do it amazingly well.

The most unexpected win from this movie is the cultural dynamic between Rocky, an old white man, and Adonis, a young black millennial, lending itself to random comedy that bring out the charm in both characters. The lighthearted nature of Rocky and Adonis laughing together offers balance against dramatic scenes of anger, betrayal, and sadness, including touches of levity when you least expect it. In one scene, Rocky asks Adonis to shadow box as Rocky sits ill in a hospital chair, to which Adonis is apprehensive. “What, you want me to do it myself,” Rocky asks as he begins to stand up, showing the tough old-man angst he learned from Mick, and a laugh when Adonis quickly relents and gets to work. Those are the scenes that guide an audience and make a story well told; when the next dramatic scene comes and there’s no levity to be found, you know it’s serious. 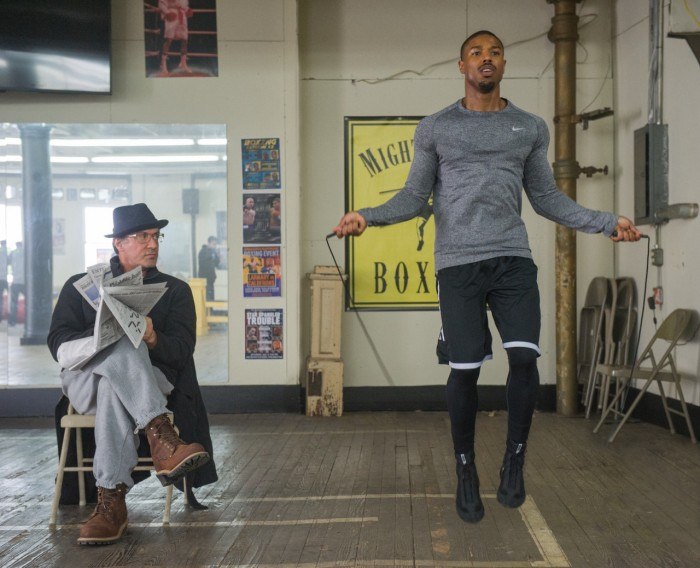 Overall, Creed is well-crafted, exciting, funny, and inspiring, and it’s successful in being original by not trying too hard to be original. From single-shot fight scenes to having three boxing matches in the film, there’s a lot of action paced incredibly well in between developing two new, great characters in the 2-hour 12-minute run-time. The second new, great character is obviously Bianca, who avoids the pitfall of being written solely as the protagonists love interest. She’s his tour of the city and his council against his own fears and insecurities, but she has dreams, goals, and challenges of her own. And she doesn’t hesitate to check Adonis when his priorities thoughtlessly infringe on hers. Talia Shire’s Adrian developed over the years, but Bianca gets it right from the jump.

The whole movie gets it right from jump — it’s 2 hours of black excellence with a slow-talking, old Jiminy Cricket. Watch it for yourself to see why. If you’re anything like us, you’ll leave the theater unsurprised how much fun you had, but surprised how long it’s been since you’ve seen a sports movie this black.