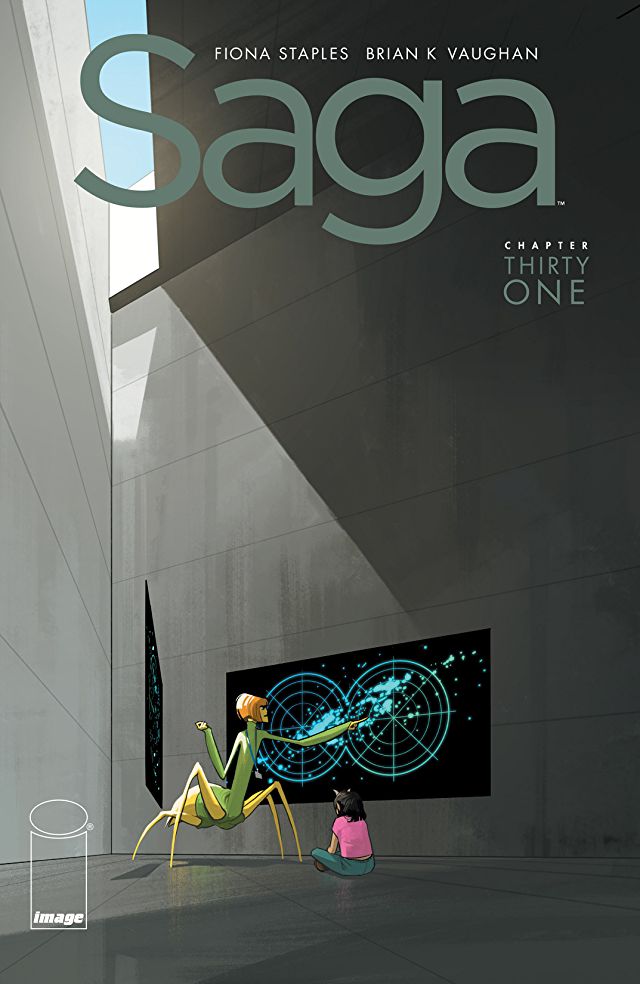 Fiona and Brian are truly heartless beings…why would you drop this new Saga this week–the day before the Thanksgiving holiday?! So tomorrow when I am surrounded by my family at the table and if I am asked to say grace , I just may slip in a soundbit that I am grateful that Hazel has been grown up healthy and maybe even happy but question how this issue ended. Lord. Help. Me. I. Am. Not. Ready. For. The Side. Eye. That. My. Mom. Is. Going. To .Throw. My. Way.

Anyway, back to this review:

Seeing little Hazel alive is not only a big sigh of relief (as we saw a glimpse of her at the age she is now thanks to this time jump on the last page of Issue #30) but seemingly happy, adjusting well wherever she is and a true class act amongst her peers. I’m not surprised. How can you not love her? 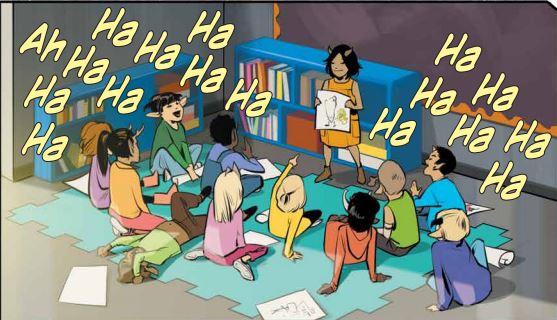 In a book like Saga where we are constantly thrown curve balls that make us clutch all Grandmama’s pearls and then some, it’s rare that we see a different side of the war. Here it is a detainee (detention) center of sorts where Hazel and Klara end up at. The overwhelming prejudice they face by enemy soldiers that attempt to dehumanize them, the fact that armed guards stand guard outside Hazel’s kindergarten classroom…it’s an all too familiar sense of AWFUL in a fictional setting that deals with the atrocities of wars, that has seen usage in the real world that holds some relevance today.

For me this issue really put in perspective of cementing Hazel’s voice as the narrator she’s always been since the very first issue. While she’s not alone, she’s certain given more agency that she’s ever had due to her age: now at age four, she can communicate to others more effectively. She can communicate her own desires and ideals more effectively. Granted it is still a limited scope but she can even logically make her own decisions and she’s at an age where she can think back on memories and begin to process them and how they make her feel. She’s been growing up before our eyes and with this issue I can only stare in awe for a few minutes on how far this story, Hazel’s story has come. I can only be in awe with how much Brian and Fiona have to work with to get us to fall head over heels with this little girl and the journey she’s been on and the journey of where she’s to go. 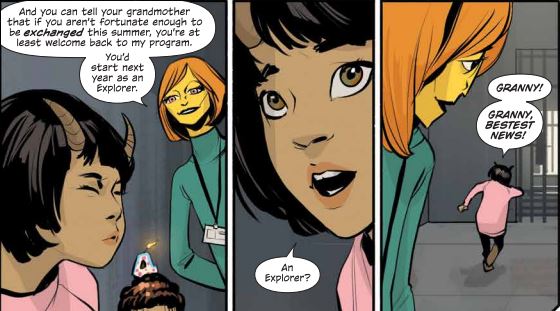 This issue did a great job in bringing us back to the story we love or hate (or both depending on what issue(s)  your heart strings needed to be reattached because your feels jumbled all over the place). Seeing some familiar faces and seeing also seeing some that were not and… A LOT MORE that Hazel is sure to have more questions about that I’m sure Grandma Klara does not have it in her to answer anytime soon.

10 “NAILED IT” Kindergarten Assignments out of 10