Back in high school English classes, there was this trend amongst my peers and I that after we learned about some common literary technique or archetypal type of character, we couldn’t help but begin seeing those techniques and characters in every piece of media. Of course, it’s not too difficult to draw a line between the hero Odysseus making his epic journey through the isles to return home versus the Superman stranded on a red planet after being teleported their by Toy Man in that one Justice League Unlimited episode.

Whether it’s Super Mario or Tetris, video games employ different styles and methods of learning techniques to help their players understand the game. This is no better exemplified than with the Destiny franchise, which due to the new aggressive cadence, releases end game content on a three-month cycle. During this Season of the Haunted, said endgame content was the Duality Dungeon, a three-person activity that tests the might and mettle of one to three Guardians and employs several different pedagogical methods to help guide players without explicit instruction.

A Brief Introduction to Learning Theory

Before we do a level by level break down of the mechanics of Duality Dungeon, we’re going to quickly go over two different learning models. The first is behaviorism, something that you may already be familiar with in some iteration or another. Behaviorism is a learning theory rooted in conditional training. If A happens, do B. If X happens, do Y.

Behaviorism is best exemplified with the classic Pavlov’s dog example, where a dog learns to associate the sound of a bell to food, or the related Skinner box where an animal has to do a task to get food. Both of this showcase the core of behaviorism, the Stimulus / Response model. When presented with a thing, the learner has to respond to the thing to see the outcome. Desired responses are rewarded, unwanted responses are punished.

The other learning theory I think would be prudent to briefly review before getting in Duality Dungeon is schema theory, which builds off the concepts of behaviorism. Schema Theory is a really fancy way of saying that our brains create hierarchical relationships between concepts and that we are able to insert/delete/replicate/modify these relationships to help us parse out new concepts when we are presented with new stimulus. The technical terms don’t matter for the purposes of this article, but just imagine schemas like branching roadmaps that we follow.

And with that, we can start digging into the design elements of the current endgame endeavor of Destiny 2.

Obvious spoilers for the mechanics and some of the lore of the Duality dungeon ahead.

When you first start Duality Dungeon, you eventually end up in a locked room with a grated window. Off in the distance, there is a bell and given the lack of any other interactable components, eventually you’ll shoot the bell. Doing so will teleport you to a red nightmare-ish world. The colors are mono-tone, the contrast is high, and the environment is slightly different. You then may either shoot the bell again from a distance, only to find that the “Darkness Consumes” and you’re back in the starting room, or you may be patient and wait to shoot the bell when you’re right next to it, at which point you find yourself teleported back to the normal realm, alive and well.

This presents the principle mechanic’s Stimulus/Response. You need to shoot to bell to navigate the world, however, you’re not allowed to shoot the bell from a distance lest you wipe. It plays into the player’s natural schema (Wiping is bad, progressing is good) as well, and the dungeons requires you to repeatedly demonstrate a mastery of this concept before continuing. And when you do, you’re also expected to do a little bit more.

Deja Vu and You

As you eventually work your way to the first encounter, you dropped into an arena and several things happen from a learning perspective. For long-term players of the game, they will recognize four iconic images in the four corners of the room and immediately begin recalling their schema about the last time they saw these icons. Newer players also benefit from the schema, since these are the symbols that are utilized in the Derelict Leviathan, although it won’t necessarily be as strong. The familiar bell calls to the player, and the encounter begins in proper when players shoot.

Upon being teleported to the Nightmare realm, those veteran players will recognize Gahlran from the Crown of Sorrows raid and immediately connect that some sort of ritual is required to get rid of the immunity shield, and newer players will similarly make the connection insofar that getting “immune” probably means something is up.

Upon exploring the arena, eventually the guardians will stumble upon a Standard Bearer (Stimulus) and upon defeating them, they drop a standard (Response). These standards have names like Axes, War Beast, Chalice, and Sun, which connects them to the holographic symbols and helps with memory.

However, the players have to contend with Bellkeepers (a new stimulus), whose death allow the bell to be rung (an old stimulus now part of a new response), a countdown timer (stimulus) which if it ever gets to zero wipes (response), and it may take an iteration or two, before they piece together the sequence. Upon the standards placement, the door to that side opens. This marks the first leap of logic that the players have to make, in that they need to ring the bell in the recently openly room to enter that locked room in the Nightmare realm. At which point, enemies appear so the natural schema kicks in, and after felling shades on both sides, a text prompt appears indicating vulnerability, and thus the players have learned the cycle and through repetition, they are able to apply what they learn to get loot.

As the players continue to descend downward into the mindscape, they continually apply these same fundamental principles to progress in the interstitial. They are continually asked to interact with elements in the Nightmare realm in order to illicit the desired response from something in the standard realm.

By the time they get to the second encounter, they have familiarity, and thus the challenge of the second encounter is less learning mechanics, but learning how to execute them in a high stress environment with an added twist. In this encounter, there are multiple standard bearers that can spawn, and killing the wrong one deducts precious seconds from the minute of Nightmare time. Not enough to completely make it impossible to complete, but enough to reinforce that correctness is crucial.

It was at this point in my first run through of Duality Dungeon, I also made another connection thanks to my schema. The bell mechanic here was not unlike the Effect and Cause mission of Titanfall 2, one of the most iconic campaign missions in a first person shooter, where the protagonist also had to switch between interconnected set pieces to progress. Another neat part of learning learning theory.

Of course, the final encounter of Duality has a couple more twists. There is a giant bell (stimulus) so immediately the question becomes how to ring that belt and as you approach, the Nightmare of Caiatl emerges from the amorphous form with a familiar red immunity aura. The holographic symbols once again appear and the arena has clearly marked balconies, and bell holders, so the recurring schema comes into play (including the part of the brain that knows to kill the bellkeepers to make the bells usable, and that killing an incorrect standard bearer comes at a time cost), although the last crinkles in Duality‘s design leave a little to be desired.

Firstly, after successfully depositing the four standards, the environment shifts, but it’s not immediately evident what the new stimulus is to progress the fight. You have to be at the right angle to see the purple jeweled locks that can be destroyed to ring the bell, but they are easily missed while you try to survive the onslaught.

Secondly, after doing all of that, you entered into a hectic DPS phase involving killing the bellkeepers and keeping track of Caiatl. Given the lack of a timer, you can maybe infer that the bells are interactable in some given that if the boss gets to one, she absconds leaving you with wasted time, and even if you do infer that you have to be at the correct bell to get a damage buff since unbuffed, you do next to do no damage, it will take a few cycles to realize that you can stall her approach by baiting a stomp (a relatively new mechanic in Destiny‘s schema) and even more few cycles to realize that to properly stun requires Caiatl to be within a certain radius of the bell.

But nitpicks of the final taught sets of stimuli/responses aside, the dungeon itself is a master craft of how pedagogical theory interplays with game design.

Behaviorism and schema theory are far from the only applicable learning models that can be found in video games. However, they serve as a solid foundation to beginning to uncover all of the tricks that designers do to help guide as long through difficult encounters, and it’s these same techniques that also help us learn how to do things. And we didn’t even touch on the different ways that the designers made their mechanics accessible via strict color coding, particle effects, and even the standard names for the different standard names. Nor did we go over how various content creators approach making their guides.

There’s an incredibly staggering amount of effort put into the design of these games and the subsequent analysis of said design, and I have a perpetual appreciation to the skill it takes to translate the abstract into an actual activity.

All images of the Duality Dungeon courtesy of the Bungie Press Site. 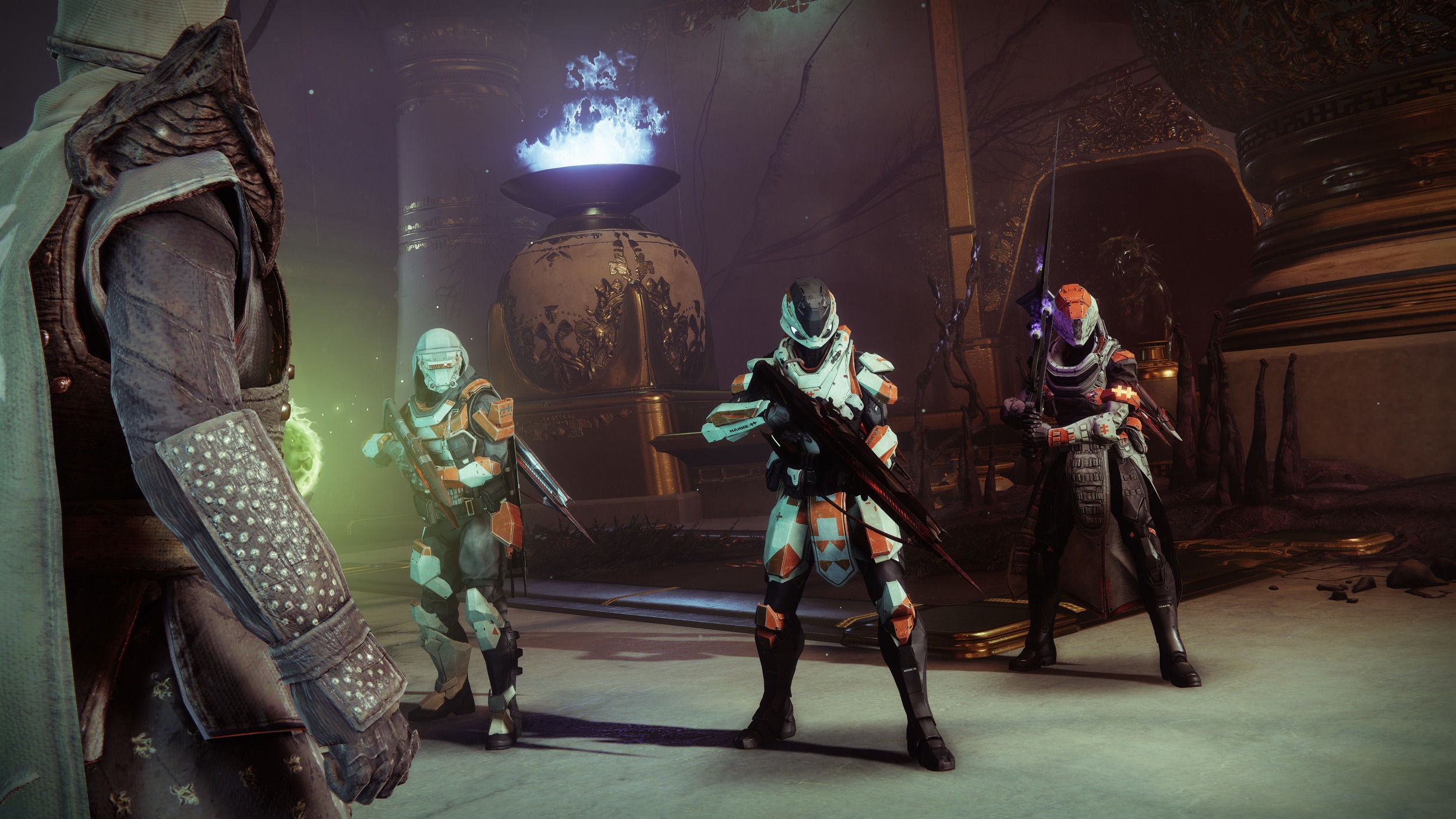